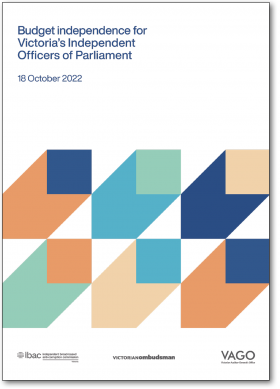 Victoria’s integrity agencies: Independent Broad-based Anti-corruption Commission, Victorian Auditor-General’s Office and the Victorian Ombudsman, have come together to present an evidence based paper outlining the need for greater budgetary independence. The intention is to remove the politics from the debate, so that governments of whatever stripe cannot be accused, fairly or otherwise, of interfering with the independence of those agencies whose job it is to hold them to account.

The current process of having the government of the day rather than the Parliament decide the funding of Victoria’s integrity agencies has been a hot topic for many years; in the last year it has grown even hotter.

Their joint paper sets out a case to further strengthen the perceived and actual independence of these three officers of Parliament.

The key recommendation is that consideration of their funding be the responsibility of a new independent statutory commission/tribunal, similar to the current Victorian Independent Remuneration Tribunal. All evidence, reasoning and recommendations to the Treasurer would be tabled in Parliament to promote full transparency.

While there are many dimensions to independence, the paper deals only with the issue of how the respective offices are funded. This matter has recently become an 'issue de jour' in the context of a proposed federal integrity commission, and in both New South Wales and, most recently, in Queensland. The three integrity agencies judge it timely therefore to add to this growing national debate, so that Victoria stays aligned with contemporary thinking and approaches.

It is also timely to consider the issue in light of the Government’s acceptance of the recommendations made in Operation Watts by IBAC and the Ombudsman to improve Parliamentary integrity.

In presenting this paper the three integrity agency heads make no implied or express criticism of their current funding levels. Rather they are seeking to establish a transparent and robust process which is apolitical, and in doing so, to provide the Parliament and the community with assurance that their respective offices have the resources they need to do their jobs well. They believe it is in the best interests of all who aspire to government to promote these reforms. This is an opportune time to seek a commitment from all parties to a reform that must be profoundly in the public interest.

We recommend that the Victorian Government, in parallel with its commitment to work with the Parliament to establish a joint Parliamentary Ethics Committee, undertakes work to establish an Independent Commission/Tribunal (IC/T) under legislation to support transparent, accountable and evidence-based decision-making in relation to the resourcing arrangements for the three Independent Officers.

We further recommend that in conducting this work and establishing the IC/T, and associated legislation, the Government:

VAGO provides assurance to Parliament and the Victorian community about how effectively public sector agencies are providing services and using public money. This is achieved through an annual program of financial and performance audits and reviews of state and local government public sector entities. VAGO welcomes submissions from members of the public to identify future topics for our audit program.

To suggest an audit visit www.audit.vic.gov.au/suggest-audit

To make a complaint about an action or decision made by a Victorian public organisation visit www.ombudsman.vic.gov.au or call 1800 806 314.