VAGO employs around 185 staff who plan and conduct audits, and prepare reports for tabling in Parliament. Our audit staff are professionally qualified and accredited in a broad range of disciplines such as arts, economics, business, law, accounting, public policy, social and natural sciences, and statistics. Our support staff have expertise in IT, human resources, communications, records management and administration.

The Executive Leadership Team consists of the Auditor-General, Deputy Auditor-General and Assistant Auditors-General for Financial and Performance Audit. 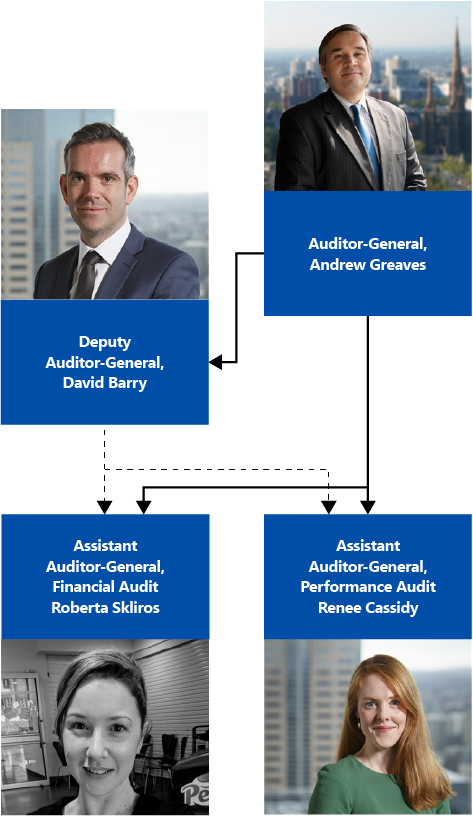 Dave was previously Chief Executive Officer of the Alpine Shire Council in North East Victoria, where he led significant reform initiatives underpinned by a strong focus on innovation. He is passionate about delivering better and lower cost outcomes for our clients and the wider Victorian community. Dave is responsible for the operations of the Victorian Auditor-General’s Office and acts as the Auditor-General in his absence. He oversees the Financial, Performance and Technical Audit business units.

Roberta first joined VAGO in 2006 as a financial auditor. After four years at VAGO she moved to a private sector professional services firm to broaden and deepen her experience, before returning to VAGO as a Director in 2014. She has undertaken audit work in a range of public sector areas including central agencies, financial services and environment, and also led the technical audit services team within VAGO. Roberta has strong interest in coaching and developing auditors and enhancing public sector financial reporting. She manages a business unit of around 75 employees, and is responsible for VAGO's financial audit activities across a diverse range of portfolios.

Renee joined VAGO in 2007 as a performance audit analyst, and has since had manager and director roles. She has a background in health, and has undertaken audit work in a range of public sector areas including human services and justice. Renee has a particular interest in training and development and public sector evaluation. She manages a business unit of around 50 employees, and is responsible for VAGO's performance audit activities across a diverse range of portfolios.