Skip to main content
Collapse Menu View by section Auditor-General’s Report on the Annual Financial Report of the State of Victoria: 2017–18

This year, we provided a clear audit opinion on the AFR. A clear audit opinion adds credibility to the financial statements by providing reasonable assurance that reported information is reliable and accurate, in keeping with the requirements of relevant accounting standards and applicable legislation. A copy is shown in Appendix B.

Figure 2A details the material adjustments we identified through our audits of the 33 significant state-controlled entities.

Figure 2B details the material adjustments that were identified during our audit of the AFR.

Figure 2B
Material adjustments to the draft AFR

Timely financial statements provide relevant and useful information to the public and to the entity's other stakeholders. The timeliness of the AFR is measured against the statutory reporting deadline established in the Financial Management Act 1994, and against the annual production timetable set by DTF.

The timely preparation and audit of the AFR largely depends on the 33 significant state-controlled entities meeting their key milestones in the AFR preparation timetable, and on the early identification and resolution of significant accounting issues.

DTF set a milestone date of 17 August 2018 for all significant state-controlled entities to finalise their financial statements, including an audit opinion. This date was set to allow adequate time to prepare and audit the AFR. Figure 2C shows the performance of significant state-controlled entities in finalising their financial statements against the DTF-imposed milestone over the past five financial years. 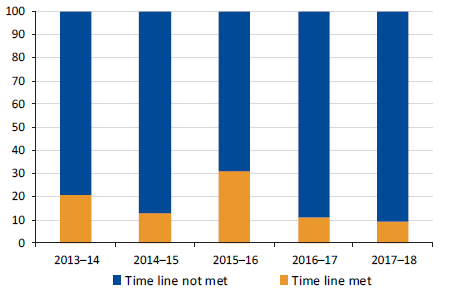 Only three of the 33 significant state-controlled entities met the milestone date in 2017–18. Despite this, the AFR was tabled in Parliament within the statutory deadline.

As part of our audit, we focus our attention on significant financial reporting risks. These are usually material and complex transactions that are significant to the state—either in nature or value. For 2017–18, we needed to review and assess three unique transactions:

Under the contract, Transurban is required to design, partially finance and construct the WGT, then operate and maintain it for a period of approximately 23 years before transferring it back to the state. Construction is expected to be completed by late 2022.

Status of the project

Figure 2E
The state's contribution to the WGT project

Transurban will fund the balance of the project of $4.0 billion.

How the project is funded

The $2.7 billion state contributions will primarily be funded through a combination of operating surpluses and debt.

The government has granted Transurban the right to collect tolls from users of the WGT, and intends to amend and extend current Transurban tolling arrangements on CityLink to fund the remaining construction costs and operating and maintenance costs over the term of the contract. The extension will be for a further 10 years. The contract requires the state to seek the passage of legislation in Parliament in relation to tolling users of the WGT, and Parliamentary support to amend and extend the current CityLink arrangements.

If legislation is not passed or Parliamentary support is not obtained in the agreed form and time frame, the contract requires the state to make additional contributions of up to $4.0 billion to replace funding from the relevant toll revenue streams. Additionally, the state will need to pay a rate of return on finances raised by Transurban. Several variables, disclosed in note 7.2 of the 2017–18 AFR, may reduce this amount.

The State Budget does not allow for the additional state contributions that will be required if legislation is not passed by Parliament. The state will need to determine how these contributions will be funded if they become payable. Without adjusting the phasing of, or reprioritising, other government initiatives, any additional state contributions made to Transurban under the contract will be funded through a combination of operating surpluses and debt. This will increase the GGS's net debt and will impact one of government's key financial measures—net debt to gross state product, discussed in Part 5 of this report.

Accounting for the project

PPPs are long-term, complex contracts where both the public and private sectors have an interest in the underlying infrastructure. Accounting for them is challenging. There is currently no Australian accounting standard or other whole-of-Victorian Government guidance that prescribes the accounting treatment for PPP transactions.

The conditional nature of the Transurban contract adds additional complexity. The financing aspect of the contract requires legislation to be passed in the agreed form and within a specific time frame, and outlines the financial implications for the state if this does not occur. There are fundamental differences in the accounting treatment depending on the timing and nature of Parliament's decisions, which are out of the government's control.

Even though the government expects the legislation to pass and that it will obtain Parliamentary support, Australian accounting standards require that the transaction be accounted for based on the facts and circumstances current at 30 June 2018. At that date, and up to the date the Treasurer and Secretary of DTF certified the financial statements, legislation had not been passed by Parliament and support had not been obtained.

Since the legislation had not been introduced before Parliament at the reporting date, government needed to account for and disclose its contributions on the basis that there is no legislation or Parliamentary support. In the absence of an accounting standard or guidance for PPPs, government needed to exercise significant judgement to make sure the treatment reflected the substance and economic reality of the transaction, with reference to other Australian accounting standards dealing with similar transactions. Australian accounting standard AASB 117 Leases is the most relevant standard in this context.

When we assessed the attributes of the WGT contract against the current AASB 117 standard, without Parliamentary support in place, the transaction is a finance lease in nature. This has resulted in the full amount of actual and contingent commitments being disclosed in the 2017–18 AFR.

This accounting treatment will need to be reassessed:

The Metro Tunnel project will deliver a new underground rail line that will cross Melbourne and join two existing rail lines. This involves building two tunnels, approximately nine kilometres long, and five new train stations, which will be integrated with the existing metropolitan train network. The project is expected to be completed by 2025.

The tunnels and stations component is being delivered under a PPP arrangement. The private sector consortium responsible for the design, construction and fit-out of the tunnels and stations is required to maintain the majority of the assets for a period of 25 years. Once built, the state will recognise in the AFR the assets and a finance lease liability for amounts payable to the consortium. The lease liability will be paid over 25 years. Maintenance costs, which are in addition to the lease liability, will be paid and expensed as incurred.

The rail systems and rail infrastructure components are being delivered under other procurement approaches. Construction costs will be paid progressively during construction and reported in the AFR as work-in-progress assets until complete.

Status of the project

Construction of this project will cost an estimated $11.1 billion in nominal terms. The state will fund the project through a combination of operating surpluses and debt.

Snowy Hydro Limited is a company that owns and operates the Snowy Mountain Hydro-electric Scheme as an independent electricity generator in the National Electricity Market.

In March 2018, the state entered into an agreement to sell its 29 per cent equity holding in Snowy Hydro Limited to the Commonwealth Government for $2.03 billion. On 29 June 2018, the state received the entire proceeds from the transaction and derecognised its investment. It made a profit of $24.8 million on this sale.