The Victorian school funding model is complex. Under the current model, government schools derive funding from multiple sources for various purposes. The information piece explains where the funding comes from and what it is used for.

Its purpose is to shed light on one of the largest, yet most obscure areas of government funding in Victoria. In doing so, it will increase public awareness of how and why government schools are funded in the way they are. This important contextual information should also inform public debate about how Victoria’s schools are resourced and will serve to increase levels of accountability for the efficient, effective and economical use of this money.

Going forward, it is imperative that the Department of Education and Training builds on this work and provides regular updated information to the community on future school funding arrangements.

This information piece was tabled in Parliament as an appendix to the Additional School Costs for Families report. 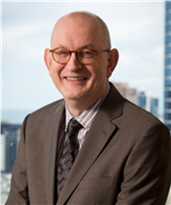 The Victorian school funding model is complex. Under the current model, government schools derive funding from multiple sources for various purposes. This information piece explains where the funding comes from and what it is used for.

My intention is to shed light on one of the largest, yet most obscure areas of government funding in Victoria. In doing so, this information piece will increase public awareness of how and why government schools are funded in the way they are. I hope that this important contextual information will inform public debate about how Victoria's schools are resourced and will also serve to increase levels of accountability for the efficient, effective and economical use of this money.

Preparing this information piece was a significant exercise. While much of this information is available to schools and their communities, it has never before been consolidated in a way that allows people to clearly understand how schools are funded.

Going forward, I believe it is imperative that the Department of Education and Training (DET) build on the work of my office to compile this information and provide regular updated information to the community on future school funding arrangements.

Review of funding for schooling

Commonwealth policy that incorporates the National Education Reform Agreement and represents the majority of the Commonwealth's funding for government and non‑government schools.

There are three parts to this information piece:

Review of funding for schooling—David Gonski

In December 2011 David Gonski completed and published his Review of Funding for Schooling. His review examined the funding arrangements for schools across Australia. It found that:

'current funding arrangements for schooling are unnecessarily complex, lack coherence and transparency, and involve a duplication of funding effort in some areas. There is an imbalance between the funding responsibilities of the Australian Government and state and territory governments across the schooling sectors.'

The review recommended a number of actions based around the principle that all schools should receive a base level of Commonwealth and state funding with loadings applied to address various disadvantages such as location, disability and socio‑economic status.

Following on from the Review of Funding for Schooling, the Commonwealth Government developed a new six-year funding agreement called the National Education Reform Agreement (NERA). NERA had two parts:

In August 2013, Victoria signed up to the NERA heads of agreement. However, it did not sign up to the bilateral agreement.

In November 2013, the federal election returned a new Commonwealth Government which agreed to fund only the first four years of NERA. Despite this, the Victorian Government decided to contribute the full six years of funding it had committed to.

In January 2014, the Commonwealth provided the first tranche of NERA funding within the Students First Funding policy, which incorporates NERA and represents the majority of Commonwealth school funding.

The original six-year NERA funding model included a confirmation of $8 400 million of previously committed funding along with a commitment to $3 800 million in new funding. Figure A1 outlines the new and existing funding committed by both Victoria and the Commonwealth under NERA.

The $12 228 million total commitment was planned to be made available to schools progressively over the six years using the following model:

The model includes an incremental increase in funding over the six-year period. This means that the total amount of funding committed in year six of the agreement—$4 332 million—is more than for the first three years combined. However, as shown in red in Figure A2, the Commonwealth commitment in the final two years remains unconfirmed.

In 2013–14, DET received a total of $10 600 million. As shown in Figure A3 this is more than any other Victorian government department. 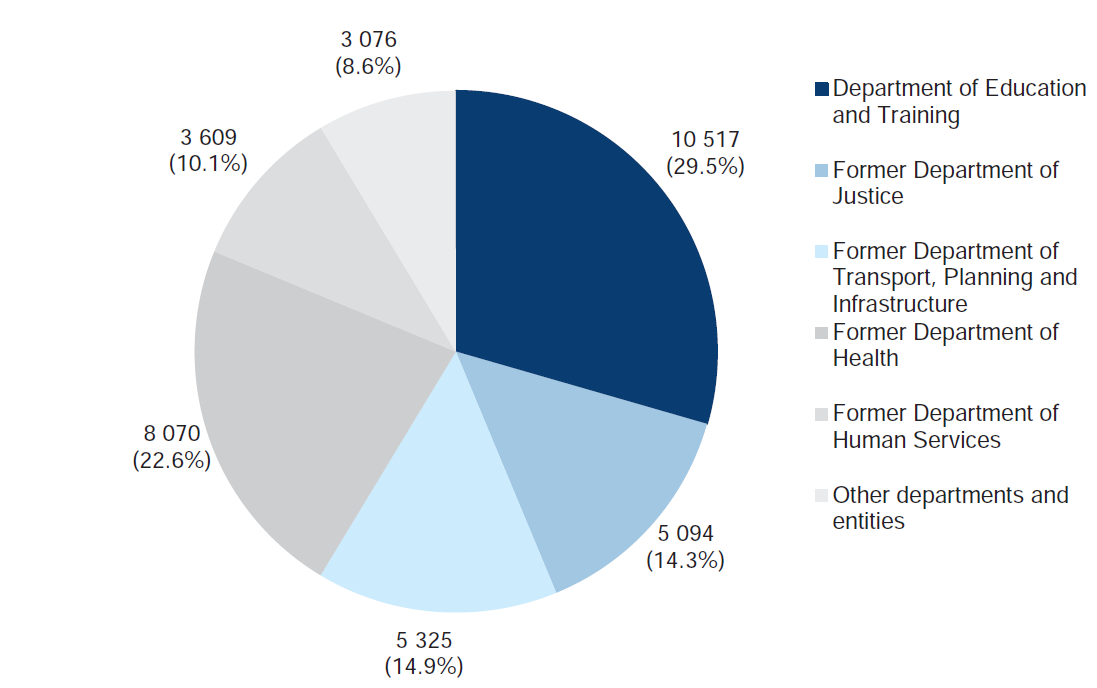 Sixty-five percent of this funding—$6 836 million—was directed towards schools as follows:

Figure A4
Department of Education and Training funding 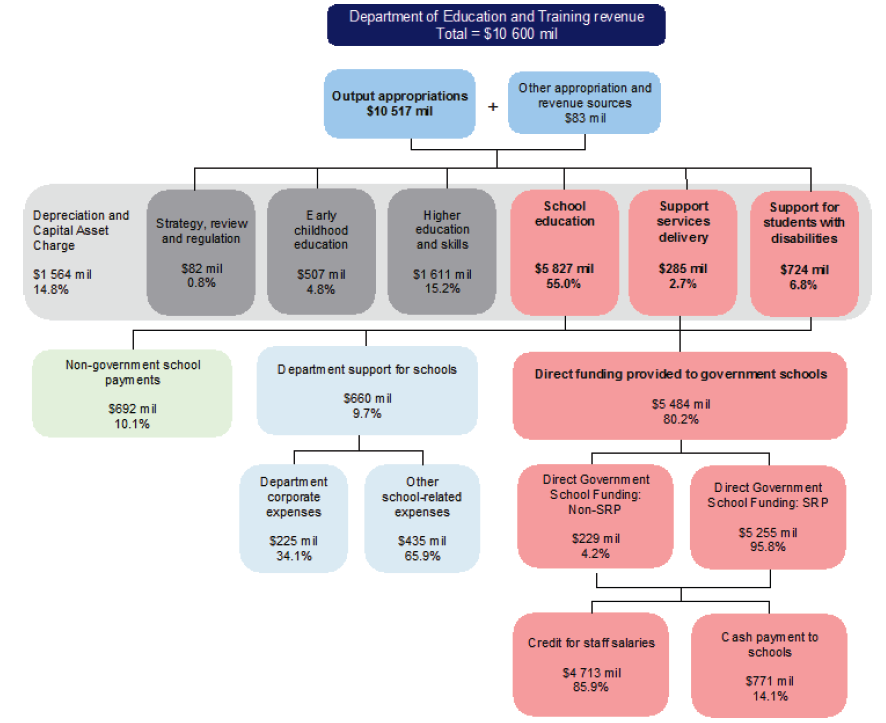 In addition to administering funding to schools, DET also provides a range of services to support schools. These include the operation of its head office in Melbourne plus nine regional offices, situated across four regions. The total cost associated with delivering these services is $660 million. Figure A5 and A6 show the breakdown of corporate and school-related expenses incurred respectively.

Note: This is based on DET's assumption that 80 per cent of corporate time is spent on activities supporting schools.

In total in 2013–14, Victorian government schools received $6 151 million—including self-generated revenue. This is an average of around $10 880 per student. Figure A7 shows how this funding was generated. 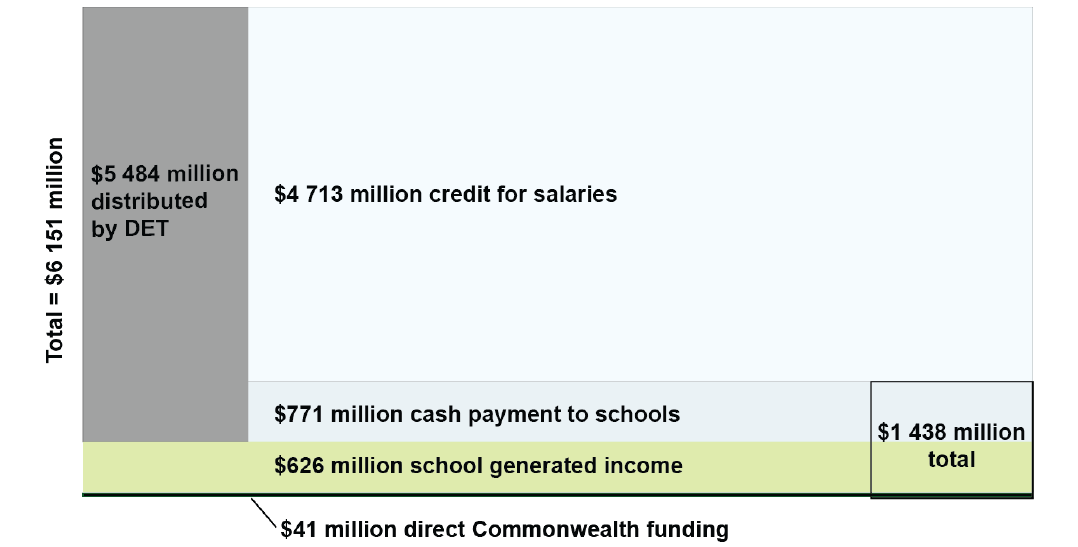 Of the $5 484 million provided to government schools in 2013–14, $4 713 million or 86 per cent was provided in the form of a credit for staff salaries. The remaining $771 million was paid directly to schools to spend on school specific costs such as amenities, maintenance and music programs. Figure A8 shows the revenue received by government schools.

The SRP is DET's school budget delivery model. In 2013–14, $5 255 million, or 96 per cent, of DET-administered funding to government schools was distributed through the SRP, which has three funding components:

Figure A9 outlines the specific funding breakdown of the SRP.

Student-based funding is intended to cover the basic cost of a typical student's instruction in the standard curriculum program. This cost includes teaching and learning, leadership, administration, professional development, relief teachers, payroll tax and superannuation for the school. It is made up of two parts:

The core student allocation includes a standard funding component for each student in the school. This funding is supplemented by a series of loadings designed to recognise the costs associated with different year levels, different types and sizes of schools, and the additional costs imposed by rurality and isolation. In 2014, the core funding for each student was:

Equity funding is intended to assist students who are socially and economically disadvantaged and to support students with additional learning needs. It is calculated based on:

School-based funding covers costs associated with infrastructure, such as cleaning, minor building works and grounds maintenance, as well as costs for specific programs, such as bus coordination, instrumental music programs and language assistants.

Contract cleaning and utilities such as water, gas and electricity account for the majority of school infrastructure spending. Instrumental music programs are the largest area of specific program funding—accounting for 31 per cent.

Aside from Commonwealth and state funding, schools also generate revenue locally. Figure A10 shows a breakdown of school-generated income for 2013–14. Parent payments—for subject contributions and camps/excursions/activities—account for the majority of school-generated income at 45.9 per cent. Trading operations account for the next highest proportion at 7.9 per cent, while fundraising accounts for 7.2 per cent.

(e) Total year-end adjustments amount to $22.5 million. This includes eliminations of recurrent funding paid to schools from DET and adjustments related to the reversal of schools debtors and unearned revenue.