The RRL project was expected to provide a number of transport, economic, community, and environmental benefits including:

In this part of the report, we examine the intended benefits that the RRL project achieved as well as some other benefits that we observed during the audit.

The RRL project has delivered a range of benefits for the rail network, commuters and the wider community by providing new train services for Melbourne's western growth areas. The RRL has also improved carrying capacity for regional and metropolitan train services which use, or connect with, the RRL.

Due to poor benefit management practices by DOT for the RRL project, it is very challenging, and perhaps impossible, to measure the expected benefits of the project. It is therefore unclear what level of value for money has been achieved.

In particular, DOT did not establish responsibility for monitoring or evaluating the expected benefits at the start of the RRL project. Since the opening of the RRL, DEDJTR and DTF have not attempted to assess the value or achievement of any realised or potential benefits delivered by the RRL.

Some expected benefits have not yet been fully realised—particularly the government's 2013 commitment to introduce capacity for an additional 10 metropolitan services in the two-hour morning peak period, with only five new services operating so far.

Although the IA submission identified some high-level benefits that the RRL was expected to deliver, it is not possible to form a definitive view of the extent to which the project has achieved these benefits, for several reasons:

Public communication about the benefits of the RRL

In 2013, the Victorian Government published a booklet titled Regional Rail Link Benefits for Victorians, in hard copy and electronic formats. The booklet provided a high-level overview of the project, the problems it was trying to address, and how the project would solve them.

Advice from the Chief Executive Officer of the RRLA to the Minister for Public Transport in August 2012 stated that the booklet would highlight a range of benefits, and was supported by commissioned research by two economic consultancy firms.

The booklet divided the benefits into four key categories:

Source: VAGO based on Regional Rail Link Benefits for Victorians.

Our analysis in Figure 3A shows that the majority of the 'benefits' presented in Regional Rail Link Benefits for Victorians were actually project outputs or activity measures.

Though these output and activity measures are worthwhile individually, they miss the next step which would link them to a benefit. A benefit measure should set a pre-project baseline and then specify a measurable, beneficial outcome for users of the RRL or the wider community that the project will deliver.

More focus on comprehensively describing expected benefits, in line with available guidance, would likely have resolved this measurement problem.

Self-evident outcomes and benefits from the RRL

Regardless of the measurement and attribution issues we have identified, there are some benefits from the RRL that are self-evident.

New stations on the western fringe of Melbourne

The construction of new stations at Wyndham Vale and Tarneit provides access to rail services for residents in Melbourne's western growth corridor who previously only had limited bus services or no public transport options at all.

IA considers access to transport to be a critical social equity issue, particularly in outer suburbs.

These new stations facilitate quicker access to central Melbourne, reducing travel time to the city and enabling easier access to employment and education.

In April 2016—almost one year after the new stations opened—Wyndham City Council surveyed residents using the Tarneit and Wyndham Vale stations to understand their travel methods and preferences before and after the introduction of the RRL. The survey findings reported a positive attitude to the RRL, with 30 per cent of respondents saying they had increased their train travel but still felt that services could be improved. 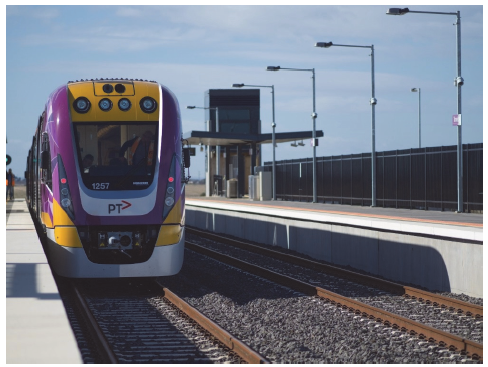 The new Tarneit station features lifts to comply with the Disability Standards for Accessible Public Transport. Photograph courtesy of DEDJTR.

The RRL project has improved train services in Melbourne's west in several ways:

The RRL project delivered a range of benefits for passengers with mobility impairments by providing facilities that are compliant with the Disability Standards for Accessible Public Transport at the two new stations—Wyndham Vale and Tarneit—and the three rebuilt stations—Sunshine, West Footscray and Footscray.

These facilities include easy-incline ramps, lifts to platforms, level-access bus stops, tactile platform markings and signs that include braille.

These features allow passengers with mobility impairments to access public transport on an equal basis and to more easily connect with the wider community, workplaces, education opportunities, medical services, and leisure and cultural activities.

As the population ages and average life spans increase, the number of people with mobility impairment will grow.

Further, a mobility challenge is not only an issue for people with permanent disabilities—it may also affect other people on a temporary basis, for example, due to an injury, pregnancy or needing to transport young children.

This further broadens the potential long-term benefit that these facilities can provide for the wider community.

The reconfiguration and refurbishment of Sunshine, West Footscray and Footscray stations has improved their amenity, with better access to facilities, improved connections to other public transport modes, and increased safety through better station access and modern surveillance technology.

The revitalisation of Sunshine Station included a new pedestrian overpass to provide a safe, open and well-lit connection to platforms and across the rail corridor. This was a distinct improvement from the previous subway connection which was poorly maintained, badly lit and known as a crime hotspot.

The upgrade also included reconfiguration of the bus interchange and a link to the retail district.

The RRL provided intangible social benefits through noise-mitigation works, described in the case study in Figure 3B. An increase in the number of metropolitan and regional rail services using this corridor has increased the value of this benefit.

Figure 3B
Case study: Noise reduction and mitigations along the RRL route 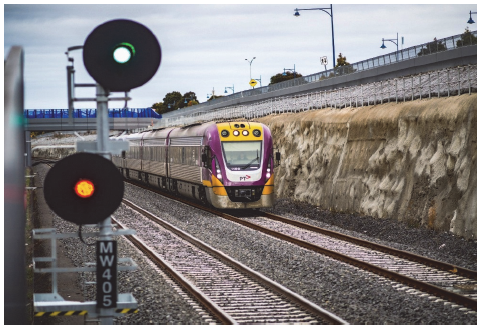 A rail cutting designed to reduce train noise on the approach into Wyndham Vale Station. Photograph courtesy of DEDJTR.

To capture insights and lessons from the project, RRLA published a 16-volume Insights booklet series for RRLA staff, which provided reflections on RRLA's approach to the development, planning, procurement, delivery and commissioning of the RRL project.

The RRLA found that the project has resulted in some unexpected benefits—most for the Victorian public, but some for the transport industry.

During this audit, several senior public sector executives supported this view, noting that the project:

In its Insights series RRLA identified numerous benefits of its approach, and lessons for the future across 14 domains, including engineering and design, planning and environment, project development and procurement, communications and stakeholder relations, project controls, contract management and construction.

Ultimately, RRLA concluded that the project made a significant contribution to the body of knowledge for future projects.

The RRL project won an industry award for Infrastructure Project of the Year at the National Infrastructure Awards 2014 and it won the Premier's Sustainability Award in 2014.

Challenges for realising outcomes and benefits

Our 2017 audit report V/Line Passenger Services found that on-time performance for V/Line trains was significantly lower in 2015–16 and from July 2016 to March 2017 than the period before the RRL opened.

This was due to significant and unexpected growth in patronage as well as wheel wear problems on the VLocity trains that emerged soon after the RRL track opened.

Rapid passenger growth has required trains to stay at platforms for longer, to enable all passengers to board, which has affected punctuality. Since the opening of the RRL, patronage on the Geelong line in the south-western corridor—V/Line's busiest line—has increased by 80 per cent.

VLocity train wheels experienced more wear than expected in the first few months of services on the RRL, which required V/Line to replace the wheels urgently and more frequently than planned. This meant that more VLocity trains were out of service than expected.

Excessive wheel wear mainly occurred on the Dynon-North Melbourne flyover, where the RRL track crosses over the top of existing metropolitan tracks. An independent report found that the increased wheel wear was due to tight curves on sections of the new RRL track, high friction between wheels and rails due to the absence of lubrication, and poor wear resistance due to the metals used to make the wheels and rails.

This operational issue has since been resolved through careful management of lubrication on tightly curved track as well as regular checking of VLocity wheels using advanced laser gauges. We observed these inspection procedures during a visit to the V/Line maintenance facility in West Melbourne.

Other actions taken to resolve this issue include:

By separating V/Line and metropolitan services, the RRL was meant to provide additional train paths on both networks to enable extra services and accommodate sustained patronage growth.

As DOT had not finalised the route alignment and solution option in the IA submission, it did not include the number of train paths the RRL would provide on completion.

The further development work that RRLA undertook after the RRL had been funded informed the number of additional train paths. The RRL was expected to enable an additional 33 services in the peak two-hour travel period across both networks. This comprised capacity for an additional 10 regional services and 23 metropolitan services. Of these, six regional and 10 metropolitan services were meant to be operational when the RRL opened, with the remainder to be delivered after the purchase of more rolling stock.

Figure 3C shows the number of services run in the peak two-hour morning travel period between 7.00 am and 8.59 am:

Figure 3C shows that at the opening of the RRL in 2015, there were an additional seven services in the peak two-hour morning travel period, compared to 2012, comprising two metropolitan services and five regional services.

The 2013 commitment also included an option to further increase the number of services that the RRL could deliver, by proposing 'additional long term capacity with the procurement of additional rolling stock'.

This new capacity could increase the potential number of services in the two‑hour morning peak period by four regional trains and 18 metropolitan trains. However, no services making use of this new potential capacity have been run.

The current 11-service increase in the two-hour morning peak since 2012 means that the RRL has not reached its expected capacity.

As the RRL moves towards its maximum designed capacity of 18 regional trains per hour, it is reasonable to expect that a number of future challenges may require the state to further invest in RRL infrastructure: 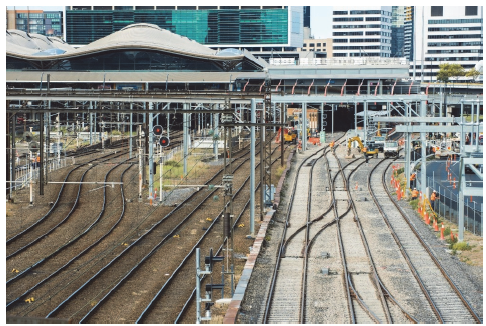 The approach to two new platforms constructed at Southern Cross Station as part of the RRL project. Photograph courtesy of DEDJTR.

Ultimately, any increase in regional services will be limited by platform availability at Southern Cross Station and the designed maximum capacity of the RRL tracks between Sunshine and central Melbourne stations. A future electrification of Melton services would free up paths and platform space for longer-distance services on the Ballarat corridor.