Do public sector agencies implement our performance audit recommendations and respond to them in a timely way?

When we audit the performance of public sector agencies, we often identify opportunities for them to improve how they work. We make recommendations to help them address the risks and the root causes of any poor performance.

However, agencies are not legislatively required to accept, complete or publicly report on our recommendations.

As a result, we conduct this annual review to monitor how the agencies we audit address our findings. This report provides for greater transparency and accountability to the Victorian public and parliamentarians about how agencies respond to our audits.

We performed a limited assurance review under Section 20 of the Audit Act 1994.

We asked agencies to attest to how they had progressed in responding to our performance audit recommendations.

Most agencies reported that they continue to accept and act on our recommendations. We found that 63 per cent of all recommendations were completed as at 31 March 2021. Further, agencies took a median time of 13 months to complete them.

However, 72 unresolved recommendations are more than three years old in 27 agencies across 28 audits. It is unclear whether risks relating to these have been mitigated by other means or remain unmanaged. 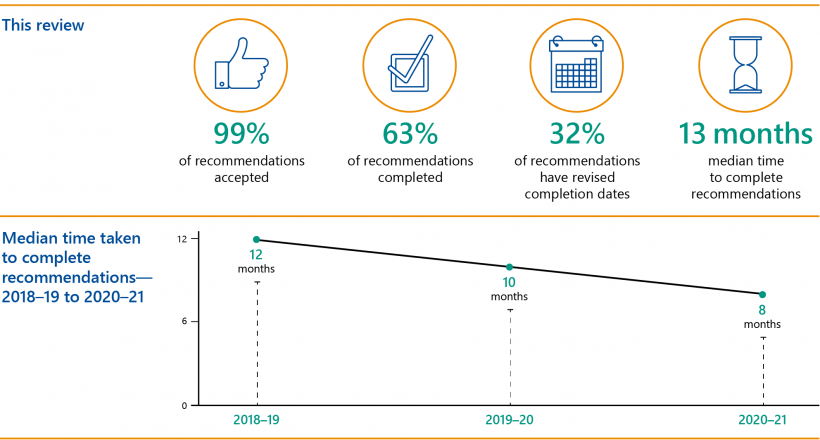 The Auditor‐General provides independent assurance to the Parliament of Victoria and the Victorian community on the performance of the state and local government public sectors.

Our performance audits assess whether agencies have effective programs and services and whether they are using their resources economically and efficiently. We also identify activities that work well and reflect better practice.

Our audit reports contain recommendations for audited agencies to improve key aspects of their operations. We ask agencies to respond to our audit recommendations by stating whether they accept them, what action they will take and how long they anticipate it will take them to complete them. We include their responses in the final report tabled in Parliament.

What we looked at

Between 2015–16 and 2019–20 we tabled 112 performance audits. For this review, we examined agencies' progress on recommendations from 76 of those audits. We looked at:

Figure A sets out the audits, agencies and recommendations we reviewed

Figure A: Audits and recommendations included in the review

Note: *Data not shown by year as agencies can be included in multiple audits in multiple years.
Source: VAGO.

We asked agencies to complete a survey and provide detailed information about their responses to each audit recommendation, including the level of acceptance, actions taken, current status and the timing of completion.

For a full list of the audits and agencies included in this review, see Appendix D.

What we left out and why

For audits that tabled in 2015–16 to 2017–18, we reviewed only the recommendations that were not complete in our previous survey (conducted November 2019). We did not focus on the completed recommendations from these audits in this review.

For a more complete picture of agency performance, refer to the review dashboard on our website (www.audit.vic.gov.au), where we have included each agency's status and response to past recommendations.

We consulted with the audited agencies and considered their views when reaching our conclusions. The agencies’ responses are in Appendix A.

When do agencies accept our recommendations?

We asked the audited agencies to tell us whether they accepted our recommendations both before we tabled their report and at the time we conducted our review.

At the time of review

We again asked agencies whether they accepted our audit recommendations at the time of this review. This enabled us to gather new data, including from those agencies that did not respond previously. Agencies accepted 1 054 of the 1 063 recommendations (99 per cent) and rejected nine.

FIGURE 1A: Acceptance of recommendations at time of tabling

FIGURE 1B: Acceptance of recommendations at time of review

Agencies that did not accept our recommendations provided clear reasons for doing so. Examples include: 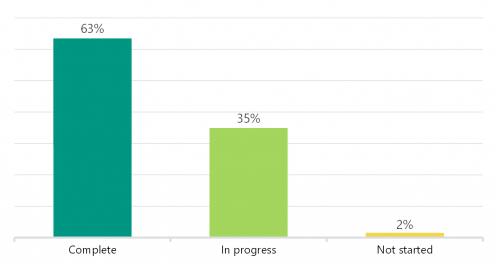 Figure 1D shows the status of recommendations by year.

There had been no action taken on 16 accepted recommendations. Agencies provided us with a number of reasons for this, including that their action depended on the following becoming available:

We urge these agencies to resolve these recommendations immediately so that the risks we identified are addressed and necessary improvements made.

How different types of agencies performed

We compared the completion status of the different types of agencies included in our review.

The nine government departments in our review had a greater number of accepted and unresolved recommendations than other types of agencies. This is largely because they are included in more of our audits. 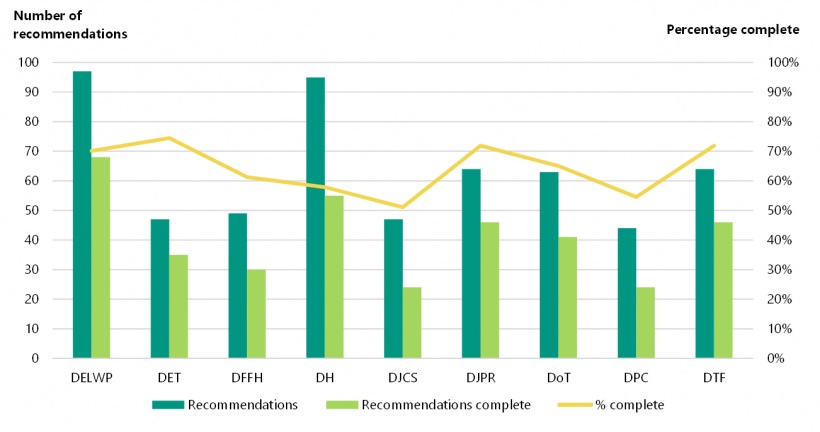 For a list of agency implementation status for this review, refer to Appendix F.

How long agencies took to complete our recommendations 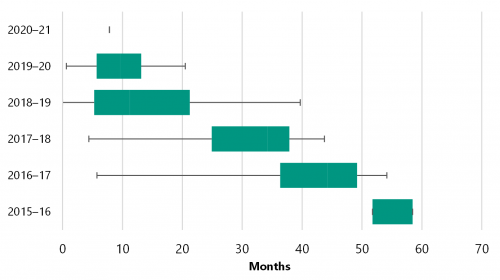 The time it takes to complete recommendations can be influenced by the volume and complexity of recommendations. There are also large differences in agency size and resources.

Departments took between zero days and 46 months, with a median of 13 months, to complete recommendations. 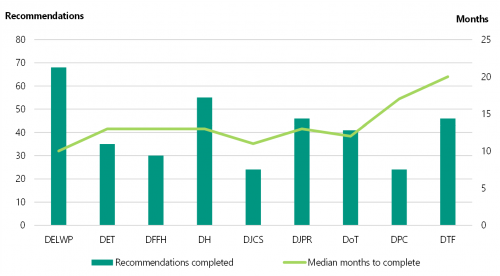 See Appendix E for a breakdown of between-year trends of departmental completion times. 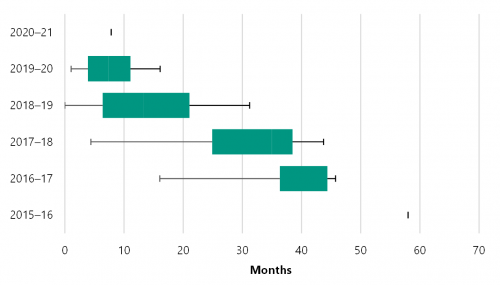 Some agencies have been slow to complete performance audit recommendations. Completion times for individual recommendations have extended up to 4.9 years after the audit tabling date.

Agencies, audits and recommendations that have taken four or more years to complete are listed in Figure 1I.

We have consulted with the agencies listed in Appendix D, and we considered their views when reaching our review findings. As required by the Audit Act 1994, we gave a draft copy of this report to those agencies and asked for their submissions and comments.

Agencies attested that their survey responses were accurate and complete as of 31 March 2021. We have received responses from agencies seeking to provide updates beyond the attestation date of this review, we have noted these updates and will include them as part of our next review.

Response provided by Secretary, Department of Education and Training 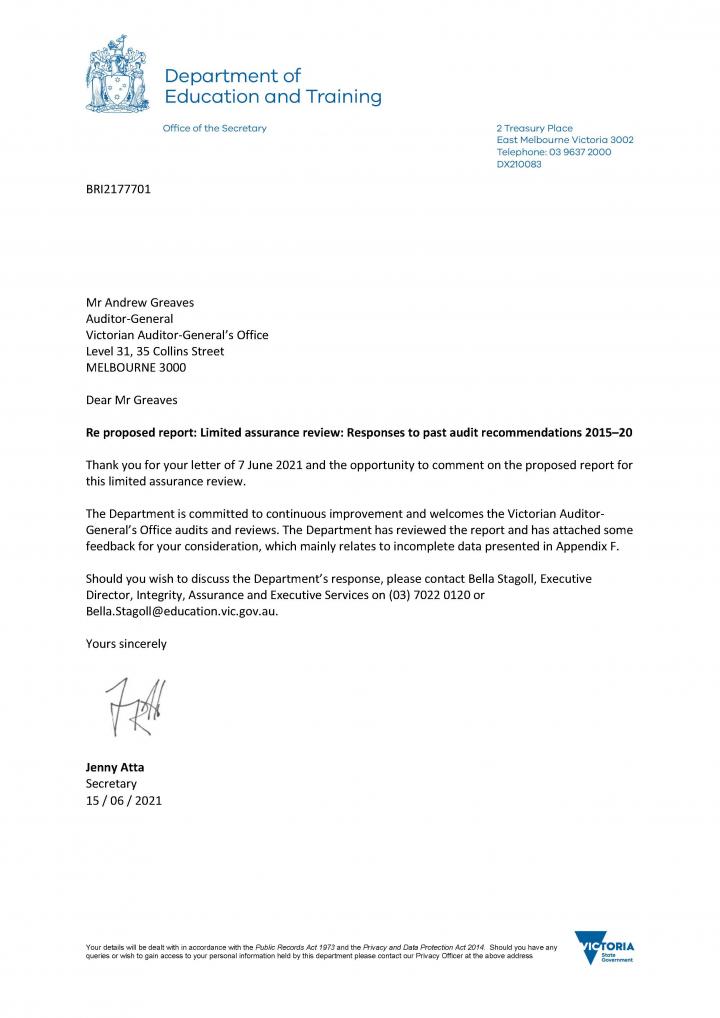 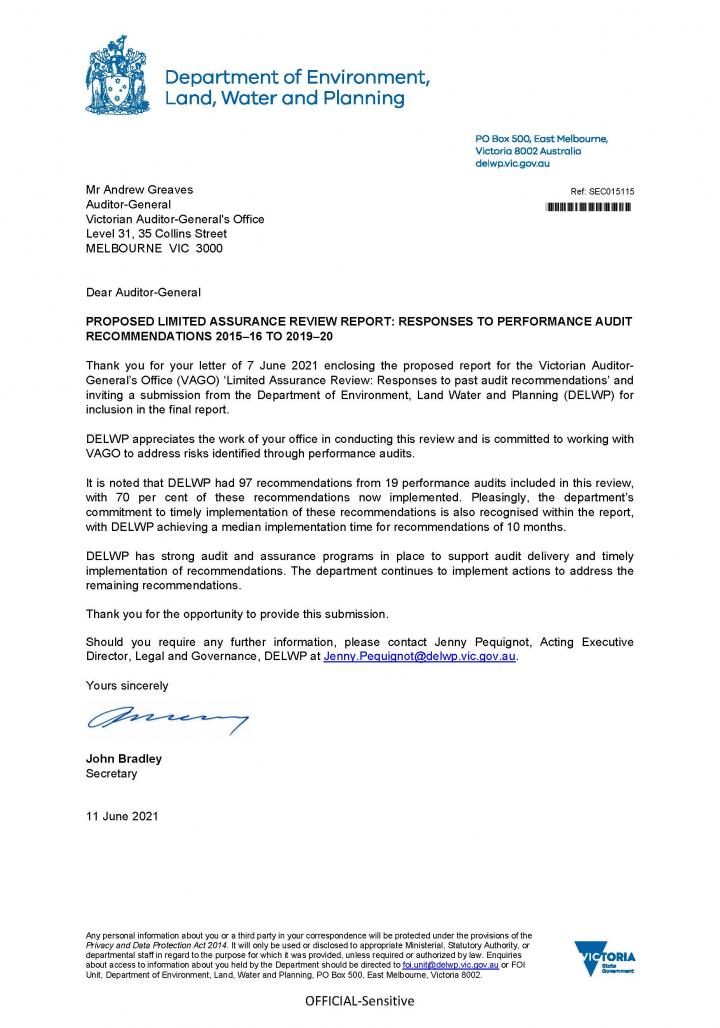 Response provided by Secretary, Department of Justice and Community Safety 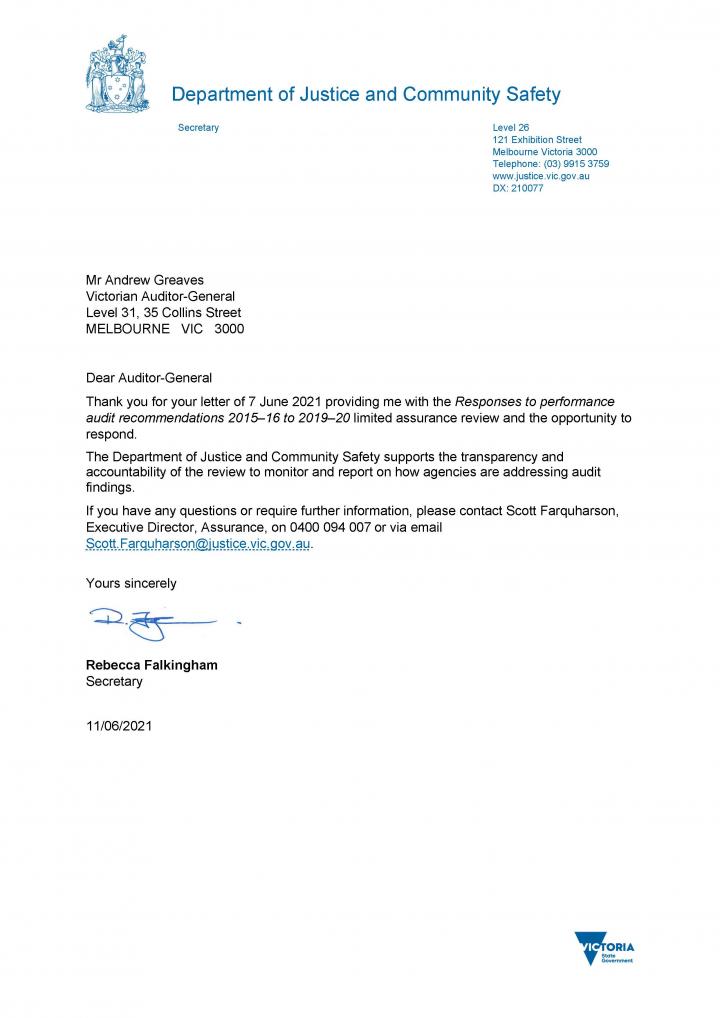 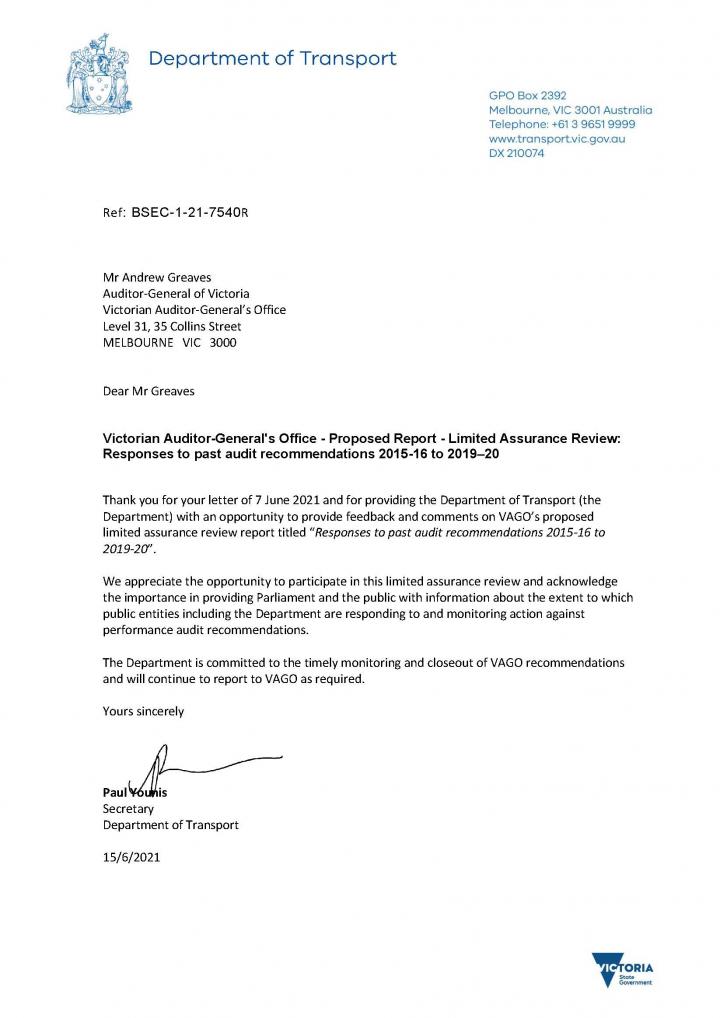 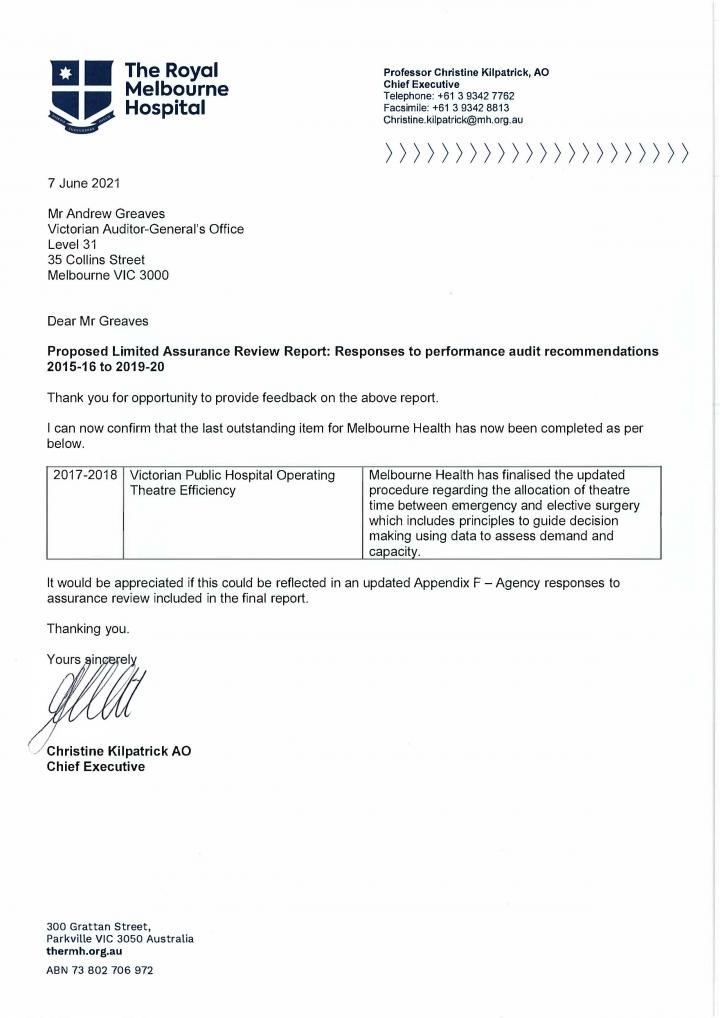 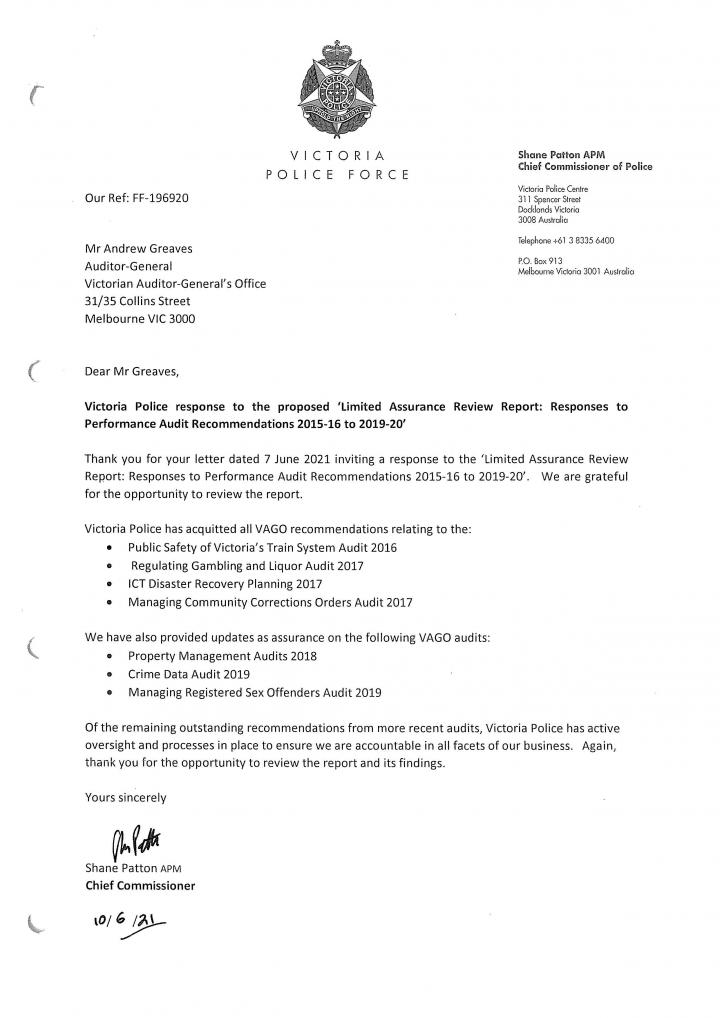 Our review procedures included asking agencies to complete a survey and attest that the responses provided were accurate and complete as at 31 March 2021.

Figures E1 to E4 show a breakdown of between-year trends of department completion times. Due to the short timeframe between reviewing and publishing, we included only two audits from 2020–21. This is why we have excluded 2020–21 in the figures. 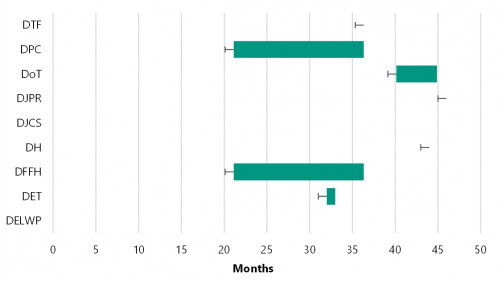 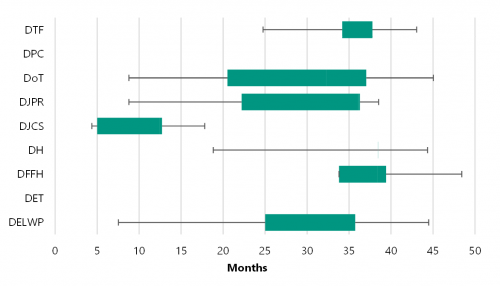 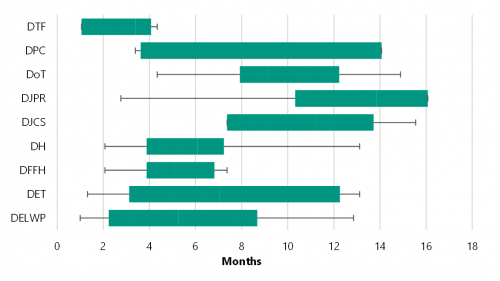 Agencies were required to self‐attest to the accuracy and completeness of their survey response. The survey sought information on the status of performance audit recommendations:

In total, the survey included 1 063 recommendations from 76 audits involving 102 agencies.

In this Appendix, we have included the status and response of the agency to all recommendations in each audit included in this assurance review. Agency responses have not been edited by VAGO.

For audits that tabled in 2015–16 to 2017–18, agencies may have already completed some recommendations. To view a more complete picture of agency performance visit this report's dashboard at www.audit.vic.gov.au.