Control systems must be secure to ensure that Victoria's train services are sustainable, protected from unauthorised access and can be reliably operated and delivered. A breach in the security of control systems could result in disruption to train services.

1.2.1 Responsibility for the transport portfolio

Since our 2010 audit Security of Infrastructure Control Systems for Water and Transport, machinery-of-government changes have transferred responsibility for the transport portfolio multiple times:

Figure 1A shows the relationship between the Minister for Public Transport and transport agencies.

Relationship between the Minister for Public Transport and transport agencies 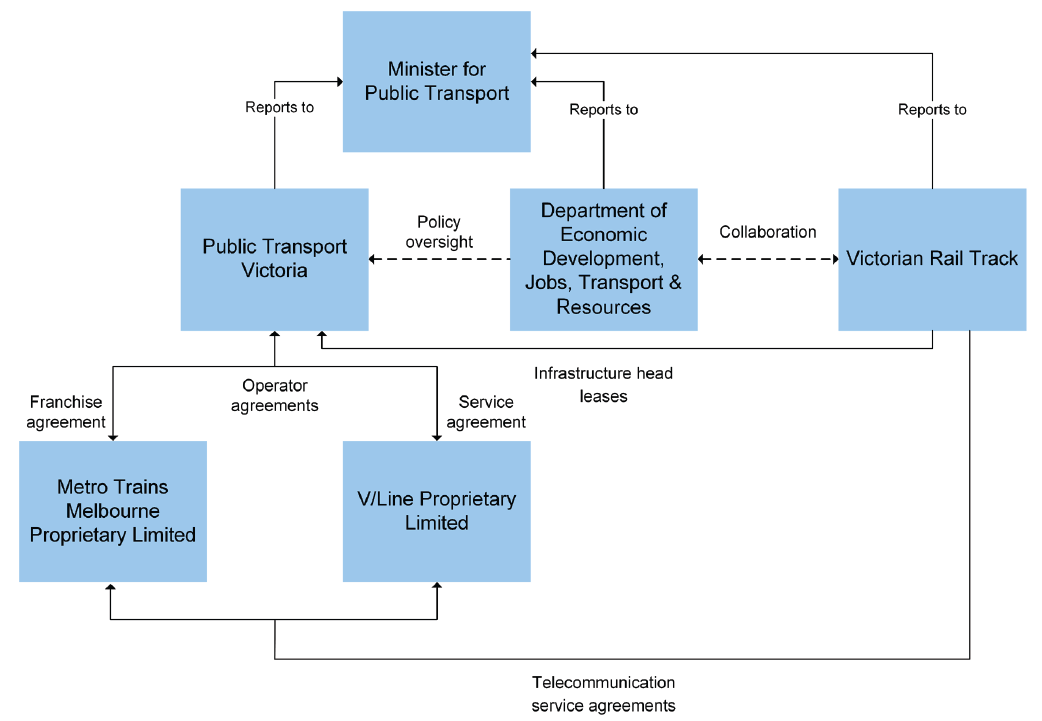 Note: In view of the impending establishment of TFV, this diagram is accurate as of 6 September 2016.

The department has overall responsibility for the planning, delivery and oversight of Victoria's transport system, infrastructure and services. It oversees transport regulatory policy and legislation. The department is also engaged in delivering the Victorian Government's major transport projects and initiatives to improve public and private transport and other major infrastructure in urban and rural Victoria.

PTV is the statutory authority responsible for planning, coordinating, providing, operating and maintaining a safe, punctual, reliable and clean public transport system—including train services. In November 2011, the Transport Integration Act 2010 was amended to form PTV. On 2 April 2012, PTV began operation and assumed responsibilities for overseeing train operations previously exercised by the Director of Public Transport and the Department of Transport.

PTV delivers train services through its agreements with operators:

The train operators use control systems to manage and control infrastructure to deliver train services across the train network.

MTM is the franchise operator of Victoria's metropolitan train service. It is a joint venture between the Hong Kong-based MTR Corporation, John Holland Group and UGL Rail. It operates 210 six-carriage trains across 869 kilometres of track. The train fleet provides more than 228 million train trips each year and transports 415 000 customers each day.

MTM is not an authority (a department, public body or an entity of which the state or a public body has control) and has participated voluntarily in this performance audit under section 15 of the Audit Act 1994.

V/Line is a Victorian Government statutory authority legislated under the Transport Integration Act 2010. Its primary objective is to provide passenger and freight train services, and it is the sole provider of train and bus services in regional Victoria. In 2014–15, more than 15 million train and bus passenger trips were taken on V/Line services. Every week, more than 1 700 train services are scheduled between Melbourne and major regional cities.

EMV also supports the Emergency Management Commissioner, who has overall responsibility for coordination and response before, during and after major emergencies, including managing the consequences of an emergency that affects critical infrastructure. This role was previously performed by Victoria Police under the Terrorism (Community Protection) Act 2003.

Critical infrastructure for train services includes network equipment, field equipment and the communication network, which are all monitored and controlled by control systems. These systems are computer based and are assets that should be managed across their life cycle to support the delivery of train services. Control systems must be secure to ensure that train services are sustainable and protected from unauthorised access and can also be reliably operated and delivered.

This audit specifically focused on the security of control systems. Figure 1B shows the boundary between control systems, network equipment, field equipment and the communication network. 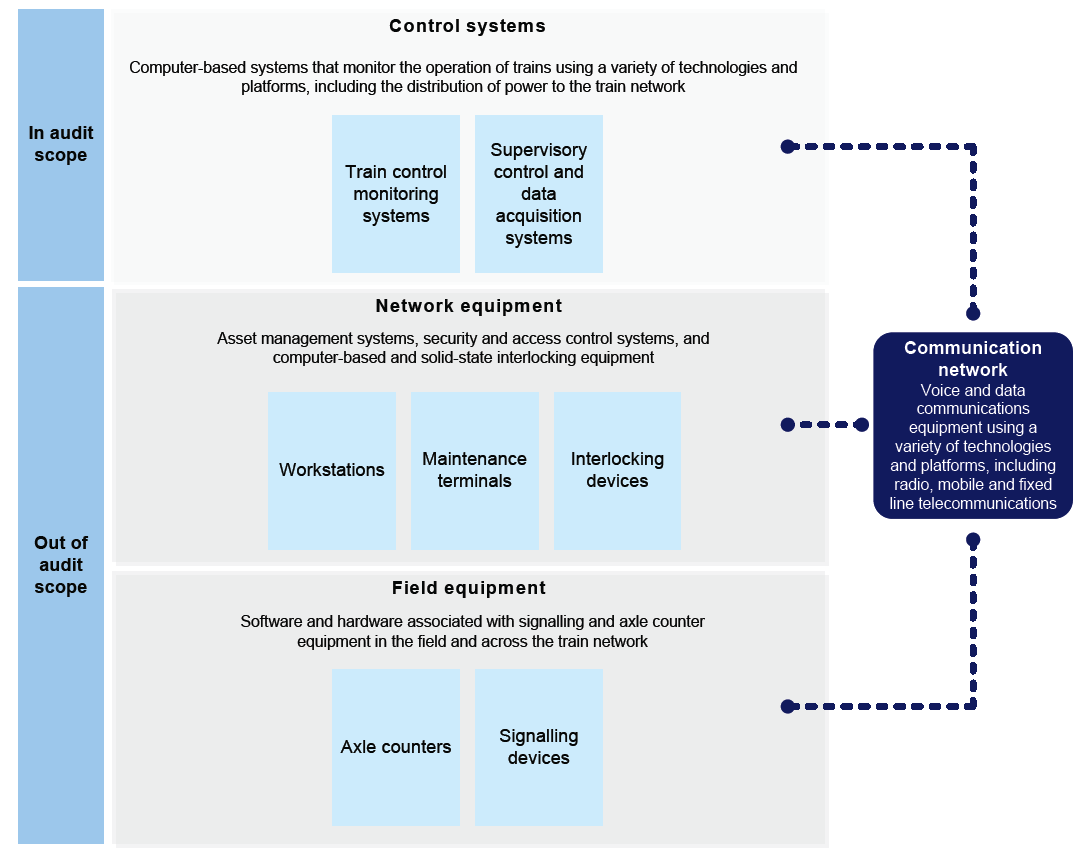 Cyber attacks pose a growing threat to the security of control systems. Australia's Trusted Information Sharing Network—a forum established by the Australian Government to build the resilience of critical infrastructure for business and government—advised that the risk of cyber attack is escalating, with targeted attacks having the capability to damage infrastructure.

For Victoria’s train system, if security vulnerabilities in control systems are not addressed, they may result in:

The motivation for launching a cyber attack varies, but it typically includes a desire to cause harm, to demand a ransom, to cause service disruption, to inflict reputational damage or to steal data. The possibility of trusted users such as employees, vendors and external contractors accessing or operating control systems inappropriately, causing service disruption, poses another threat.

In 2014–15, CERT Australia—the Australian Government's national computer emergency response team, a partner agency of the Australian Cyber Security Centre—responded to 11 733 incidents affecting Australian organisations, 218 of which involved systems of national interest and critical infrastructure. A CERT Australia survey in 2015 asked respondents a series of questions about cyber attacks. The survey's results indicated that: 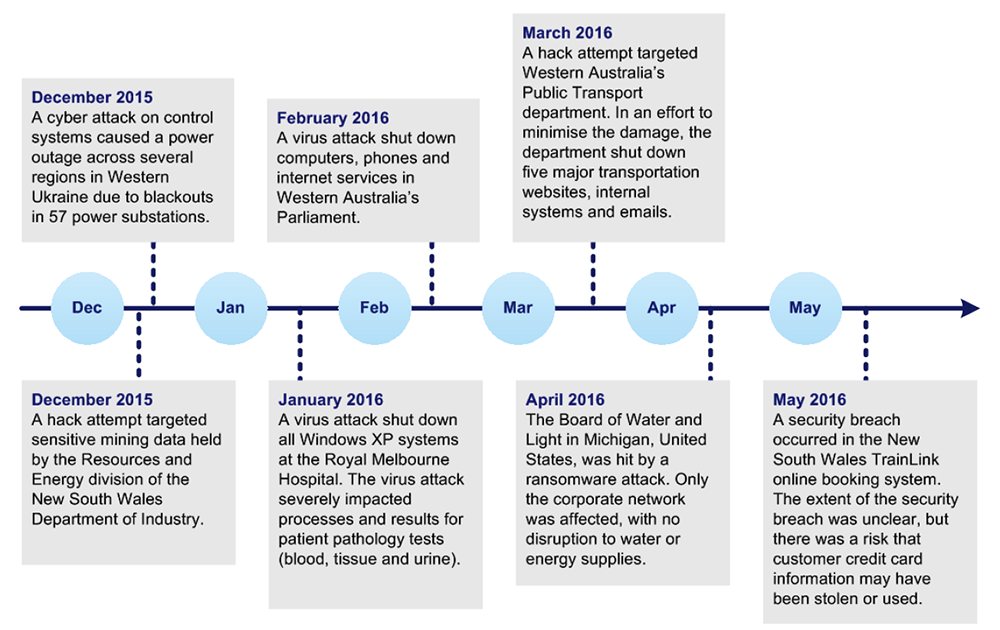 The Emergency Management Act 2013 came into effect on 1 July 2014 and established governance arrangements for emergency management in Victoria. The governance arrangements require all government agencies and other organisations to work collaboratively to respond to any potential or existing situation that may cause harm to people or damage to property or the environment. As of 1 July 2015, the 2014 amendment to the Emergency Management Act 2013 requires operators of critical infrastructure declared vital to create emergency risk management plans.

In July 2016, the Victorian Protective Data Security Framework (VPDSF) and Victorian Protective Data Security Standards (VPDSS) were published by the Commissioner of for Privacy and Data Protection. The VPDSF and VPDSS establish mandatory requirements to protect public sector data and provide for governance across the four domains of information, personnel, information and communication technology (ICT) and physical security. PTV and train operators are required to comply with the VPDSF and VPDSS requirements by July 2018.

The Asset Management Accountability Framework was released by the Department of Treasury & Finance in February 2016. The framework establishes a set of mandatory requirements and general guidance to ensure Victorian public sector agencies manage assets appropriately. This includes ICT assets.

The Information Technology Strategy: Victorian Government 2016–2020 was released by the Department of Premier & Cabinet in May 2016. The strategy provides direction for government on information management and technology for the next five years, including development of a statement of direction and overall strategy for cyber security.

The following standards include relevant principles for good governance and information security policy:

Other good practice standards relevant to maintaining the security of control systems include:

In October 2010, we tabled the performance audit report Security of Infrastructure Control Systems for Water and Transport. We found that the risk of unauthorised access to water and transport infrastructure control systems was high. Unauthorised access could compromise these systems and affect the stable delivery of essential services to the community.

In November 2013, we tabled the performance audit report Whole-of-Victorian-Government Information Security Management Framework. We found that policy, standards and protection mechanisms for the security of information and communications technology systems and data across 11 public sector agencies had not been effectively applied.

Our objective was to assess whether security risks to critical infrastructure control systems that operate and control train services are managed effectively. To do this, we assessed whether:

We focused on metropolitan and regional train services for two reasons:

The audit includes the department, agencies and train operators involved in the provision of passenger train services to the Victorian public:

We conducted this audit in accordance with section 15 of the Audit Act 1994 and Australian Auditing and Assurance Standards. The total cost of this audit was $545 000.

In accordance with section 20(3) of the Audit Act 1994, we express no adverse comment or opinion about anyone we name in this report.

This report is structured as follows: