The East West Link (EWL) project was one of the largest transport infrastructure projects ever proposed in Australia. The full project included an 18 kilometre cross city road connecting the Eastern Freeway at Hoddle Street to CityLink, the Port of Melbourne precinct and the Western Ring Road at Sunshine West. Figure 1A shows the planned EWL. 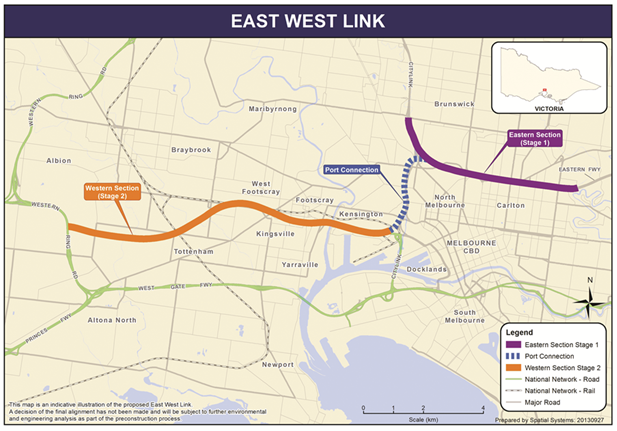 In May 2013, the then government announced that funding had been allocated as part of the 2013–14 State Budget for the eastern section of EWL—to become known as Stage 1—at an estimated cost of between $6 and $8 billion.

The tolled motorway between Hoddle Street and CityLink was to be delivered by the end of 2019 in conjunction with the private sector under an availability public private partnership (PPP). This involved the private sector financing, designing, constructing and then operating and maintaining the road for 25 years in return for payments from the state based on the availability of the road. The state was to retain toll revenues and also the associated risk that demand might be lower than expected.

In May 2014, the state announced its commitment to deliver the western section of the EWL (Stage 2) at an estimated cost of between $8 and $10 billion with initial works commencing in 2015. Stage 2 involved connecting Stage 1 to the Western Ring Road and improving freight access to the Port of Melbourne precinct. Work on Stage 2 did not proceed substantively beyond the planning stage.

On 29 September 2014, the state appointed the East West Connect (EWC) consortium following a competitive tender, to finance, design, construct, operate and maintain the tolled motorway component of Stage 1. The project agreement (contract) included a new clause 58 in response to concerns about the potential impact of a legal challenge to the validity of the planning approval decision for the project which was pending at the time. In addition, the Treasurer issued a side letter to the consortium, reaffirming the state's commitment to honouring the contract and related payment obligations, in response to EWC's concerns about questions raised in relation to the state's power to enter the contract. Appendix A sets out the key features of the contract.

Consistent with public commitments made prior to the 2014 state election while it was in Opposition, in December 2014 the new government instructed the consortium to suspend works and commenced negotiations to terminate the contract.

On 15 June 2015, the state announced the final termination agreement and acquired the EWC business and associated project assets for $1. The state paid EWC $424 million to cover its claim for costs incurred on the project. This included $81 million spent by EWC to establish a $3.1 billion loan facility for the project. Under the termination agreements the state acquired the interest rate swap facilities established by EWC as part of the project financing to manage financing risks on the project. The cost of closing out this swap agreement position will depend on interest rate movements but was estimated at $218 million at 30 June 2015.

As part of the termination the state also negotiated a $3.1 billion uncommitted note issuance mandate, which gives the state discretionary access to future debt funding, with some members of the EWC banking group. This was a new agreement between the state—through Treasury Corporation of Victoria (TCV)—and the relevant banks and not the loan facility established by EWC for the project.

Figure 1B outlines key events and decisions in the planning, development and management of the project up to its termination in June 2015.

Key decisions on the EWL project were made by government through the Cabinet process. The Cabinet made decisions following consideration of advice and/or recommendations from the Minister for Roads and relevant departments and agencies. The Premier and Treasurer also made project decisions.

The EWL project was declared under MTPFA in December 2012 for statutory planning assessment, approvals and project delivery. MTPFA was selected because it is a process specifically designed for projects like EWL. MTPFA combines planning and delivery powers under one Act, and consolidates approvals under 11 separate Acts into a single decision by the Minister for Planning. In addition to consolidating approvals, MTPFA also provides time line certainty.

1.3.2 Agencies involved in planning and development of the project

DEDJTR was responsible for whole-of-project scope and budget as well as designing the tolling policy for when the road was operational. DEDJTR provided oversight of LMA (which managed and had financial oversight of Stage 1 of the project), and established the EWL steering committee which undertook the core coordination role. DEDJTR was responsible for preparing the final EWL project business case.

LMA was a statutory authority, established in July 2010, as the successor to the Southern and Eastern Integrated Transport Authority. LMA was established to manage complex road projects and was accountable to the Minister for Roads.

The LMA was given responsibility by the government to deliver Stage 1 of the EWL project, including financial oversight, budget monitoring and financial reporting. It was also responsible for the initial development of the business case, statutory planning, developing the Expressions of Interest and Request for Proposal procurement documents, evaluating the bidder's proposals, selecting a preferred bidder and leading negotiations with this bidder to prepare contractual documentation for the project.

In January 2015, the government announced that LMA was to be abolished following the decision to suspend and ultimately discontinue the EWL project.

DTF was responsible for the commercial principles and financial structuring of the project—including structuring revenue and tolling risk transfer. DTF was represented on the project steering committee, which had direct involvement in the governance and management of the project.

DTF also had direct involvement with the contractual and financial arrangements between the state government, Commonwealth Government and EWC. It also provided financial forecasts and assessments, and negotiated with Transurban—the operator of CityLink—on the interface of the proposed EWL with the CityLink toll road.

VicRoads provided technical advice for Stage 1 of the project—road based corridor planning and assessment—and was responsible for the planning and delivery of complementary works on both the eastern and western sections such as the Eastern Freeway upgrade and Doncaster Area Rapid Transit bus upgrade.

DPC was represented on the project steering committee and provided briefings and advice to government on the progress of the project from planning through to the signing of the contract.

1.3.3 Agencies with a limited role in the planning and development of the project

The Department of Environment, Land, Water & Planning—formerly the Department of Transport, Planning and Local Infrastructure—provided advice and support to the Minister for Planning, to inform his approval decision for the project under MTPFA.

The Minister for Planning appointed an Assessment Committee under MTPFA to consider the matters associated with the proposed EWL Comprehensive Impact Statement.

The committee conducted public hearings and considered submissions on the Comprehensive Impact Statement from LMA, the Minister for Planning, several councils—Melbourne, Yarra, Moonee Valley, Moreland and Darebin—the Environment Protection Authority (EPA) and a number of community groups. The committee reported to the minister on 30 May 2014 with 43 recommendations.

Under the Environment Protection Act 1970 the construction of twin multi-lane road tunnels (with ventilation systems) for Stage 1 of EWL required a works approval from the Minister for Planning. EPA's role was to advise the minister whether a works approval should be issued and what conditions, if any, it should be subject to.

TCV was engaged by LMA to provide market interest rate benchmarking services at the signing of the project contract.

The Victorian Government Solicitor's Office (VGSO) and counsel engaged by VGSO provided legal advice to the government on the legal challenges to the validity of the Minister for Planning's EWL project planning approval decision under MTPFA, as well as advice on the power of the state to enter into the contracts with EWC and the side letter.

1.3.4 Agencies involved in the termination of the project

DPC led implementation of the new government's policy decision that the project would be terminated. DPC was responsible for negotiating a settlement and termination agreement with EWC.

DTF was responsible for seeking to achieve the 'repurposing' of the EWC project loan facility as part of the termination negotiations with EWC and its financiers.

The objective of the audit was to determine if the state effectively managed the EWL project and related costs by assessing the:

The audit examined the:

The audit included the following departments and agencies:

The audit was conducted in accordance with section 15 of the Audit Act 1994 and the Australian Auditing and Assurance Standards. Pursuant to section 20(3) of the Audit Act 1994, unless otherwise indicated any persons named in this report are not the subject of adverse comment or opinion.

1.6 Structure of the report

The report is structured as follows: