Were Department of Premier and Cabinet grants to the Migrant Workers Centre misused for political campaigning activities at the 2018 state and 2019 federal elections?

Grants are typically ‘non-exchange’ transactions, in that they transfer benefits to third parties for which the government does not get equal value in return.

They are a common feature of public administration and are often used to further government objectives.

As such, it is important that the awarding and use of grant moneys is subject to strong oversight and control.

We received a referral that included allegations that:

We performed a limited assurance review engagement under section 20 of the Audit Act 1994.

VTHC has admitted to misusing some of the DPC grant moneys it received for political campaigning activities at state and federal elections.

It is apparent that both DPC's and MWC Inc's compliance monitoring failed to detect this.

VTHC asserted to us that it previously believed these activities were permitted under its subcontract with MWC Inc, but it now accepts that they were not.

It plans to repay the grant funds it misused.

VTHC has also asserted that its Secretary directed centre staff to undertake these activities, and that it was not subject to any external direction or request to do so.

Nothing has come to our attention that contradicts VTHC’s assertions.

We provided two recommendations to DPC to recover grant funding that was misused by the VTHC to perform campaign activity at the November 2018 state and 2019 federal elections. We also recommended that DPC require all grant recipients to certify they have used funds for their intended purpose.

The 2017–18 Victorian Budget included funding of $2 million over two years to establish a new Migrant Workers Centre in Melbourne to advocate for exploited workers.

In June 2017, the Department of Premier and Cabinet (DPC) engaged a consultant to recommend arrangements for establishing the centre to the then Minister for Multicultural Affairs. The consultant’s report recommended that the centre:

Following the minister's endorsement of the report's recommendations, the consultant worked alongside DPC to form an incorporated association, Migrant Workers Centre Incorporated (MWC Inc), which was incorporated on 15 February 2018. Its committee elected the same consultant to be its inaugural chair.

In April 2018, DPC contracted MWC Inc to establish and operate the centre.

At the time MWC Inc comprised seven committee members who were appointed for a three-year term. It later expanded the committee’s membership to nine members and employed one part-time administrative officer to support the committee. MWC Inc's constitution states that its purpose is to address the exploitation affecting migrant workers by:

The contract ties grant payments to the completion of specific milestones, including DPC approval of MWC Inc's:

VTHC helps organise activities and campaigns with and on behalf of affiliated unions.

Consistent with the consultant’s recommendations, in June 2018 DPC approved MWC Inc's request to subcontract the operation of the centre to the Victorian Trades Hall Council (VTHC) ahead of its launch in August 2018.

The subcontract requires that VTHC perform the activities on the same terms and conditions as MWC Inc’s contract with DPC. The most recent subcontract allocated $2.875 million in grant funding to VTHC between June 2018 and January 2021, with MWC Inc using the remaining $503 433 to administer itself, monitor service delivery and perform other activities in line with the contract's deliverables.

MWC Inc and VTHC have modified the subcontract on four occasions, with a fifth variation expected in early 2021 that will bring the subcontract in line with MWC Inc’s contract with DPC.

The timeline below summarises contractual arrangements used to establish and operate the centre. 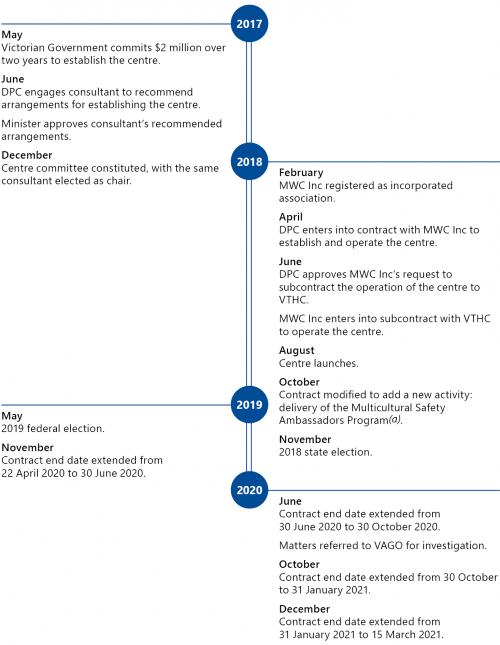 (a) The Multicultural Safety Ambassadors Program trains and supports migrant leaders in Victoria to deliver education sessions on workplace health and safety to their communities.

We consulted with the reviewed entities and considered their views when reaching our conclusions. The entities’ full responses are in Appendix A.

Responses to the allegations

We asked VTHC about the allegations that:

VTHC explained that it had previously believed this election activity was consistent with parts of the contract and subcontract, namely:

VTHC's interpretation is at odds with the subcontract's underpinning deliverables and key performance indicators, neither of which suggest that election campaigning activities are permitted.

VTHC now accepts that centre employees should not have engaged in election campaigning activities while on duty and being paid using the grant funds. It plans to repay the grant funds it misused. It also advised us that it is reviewing its systems and procedures to ensure that:

MWC Inc became aware of the allegations from media articles published in June 2020. It gave us conflicting advice about the allegations compared to VTHC, including that:

In October 2020, MWC Inc and VTHC modified the subcontract (backdated to June 2020) to clarify VTHC's obligations for its staff to only perform duties within the scope of the subcontract while on duty for the centre. This included a new clause that states 'while performing the services, the staff must not engage in VTHC work outside the services'.

Subject to MWC Inc obtaining further government funding, it is now working with VTHC to deliver the contracted services itself, rather than through a subcontracting arrangement.

Like MWC Inc, DPC became aware of the allegations from the June 2020 media articles. It advised us that in response it 'reviewed the funding agreement and assessed the acquittals provided by the MWC against the funding agreement to ensure that those reports demonstrated that the MWC was using the funds for the intended purpose'.

DPC periodically collects workplans, budgets, progress reports and financial reports from MWC Inc. However, this information gave no indication of whether the alleged election activity occurred.

Under the contract, DPC may conduct an audit of MWC Inc and VTHC if it has reasonable concerns that they have misused grant funding. The contract gives DPC access to all information and records needed to undertake the audit, along with full access to MWC Inc's and VTHC's premises. DPC did not undertake such an audit after it learned of the allegations.

(a)Machinery of government changes on 1 February 2021 transferred responsibility for administering grants to the Migrant Workers Centre from DPC to the Department of Families, Fairness and Housing (DFFH). As such, DPC and DFFH provided a joint response to the above recommendations that is included in Appendix A.

Other issues arising from the review

Our investigation into these allegations revealed underlying issues with the establishment of the centre.

DPC could not demonstrate compliance with its procurement policy when it engaged a consultant in June 2017 to recommend arrangements for establishing the centre.

DPC’s contract with the consultant included an estimated cost of $16 000. Under DPC’s 2017 procurement policy, it had to obtain three written quotes for all procurements valued between $2 000 and $25 000. We found no evidence that DPC sought quotes from other parties for this procurement. DPC also advised us that it ‘has not been able to locate any records indicating that three quotes were obtained’.

Problems with the subcontracting arrangement

The consultant’s June 2017 report recommended that, in addition to establishing the centre as an incorporated association, it should be co-located with like-purpose organisations such as VTHC or community welfare centres.

MWC Inc’s subcontract with VTHC allowed the centre to leverage existing networks with migrant communities. However, it increased the risk that:

MWC Inc's plan to operate the centre itself should address these risks.

We have consulted with DPC, MWC Inc and VTHC, and we considered their views when reaching our review conclusions. As required by the Audit Act 1994, we gave a draft copy of this report, or relevant extracts, to those entities and asked for their submissions and comments.

Responsibility for the accuracy, fairness and balance of those comments rests solely with the entity head. 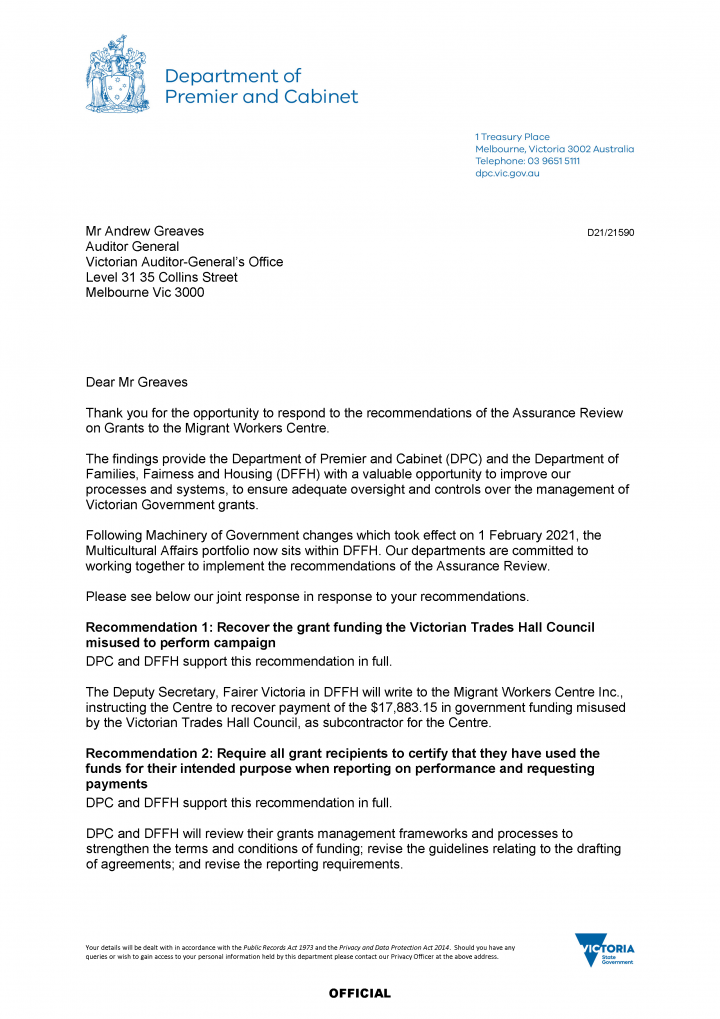 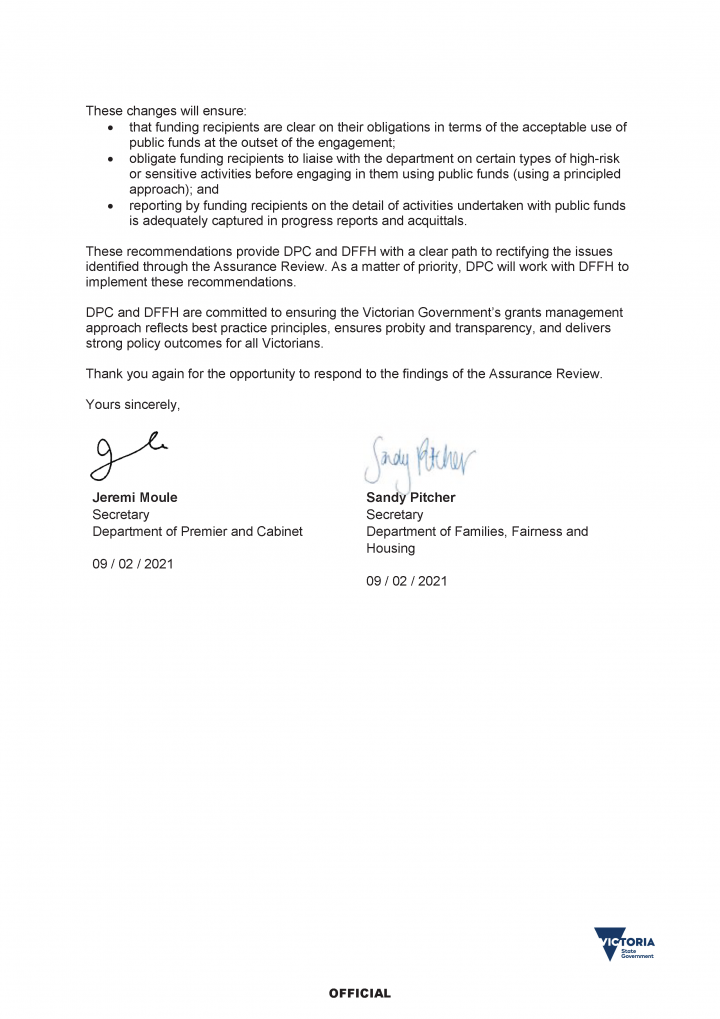 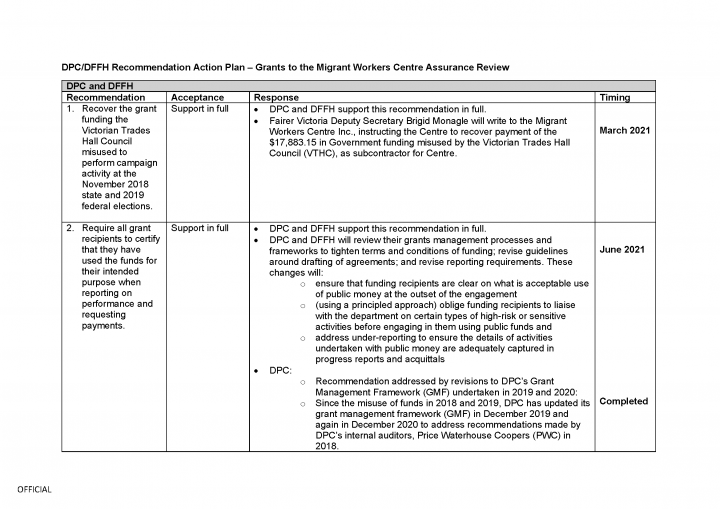 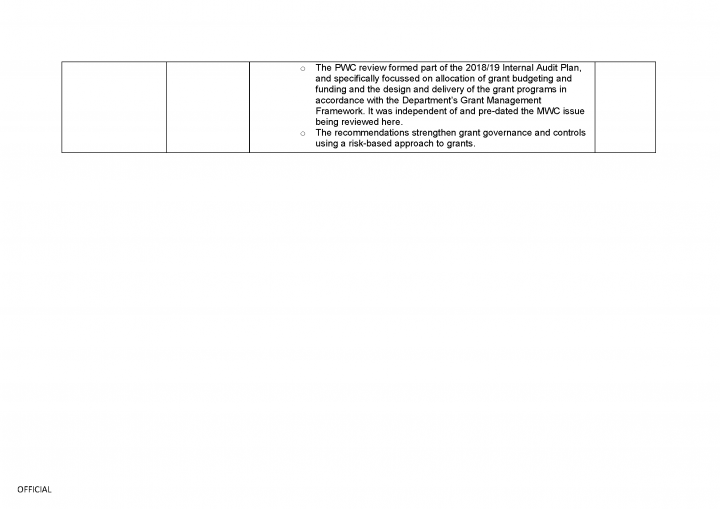 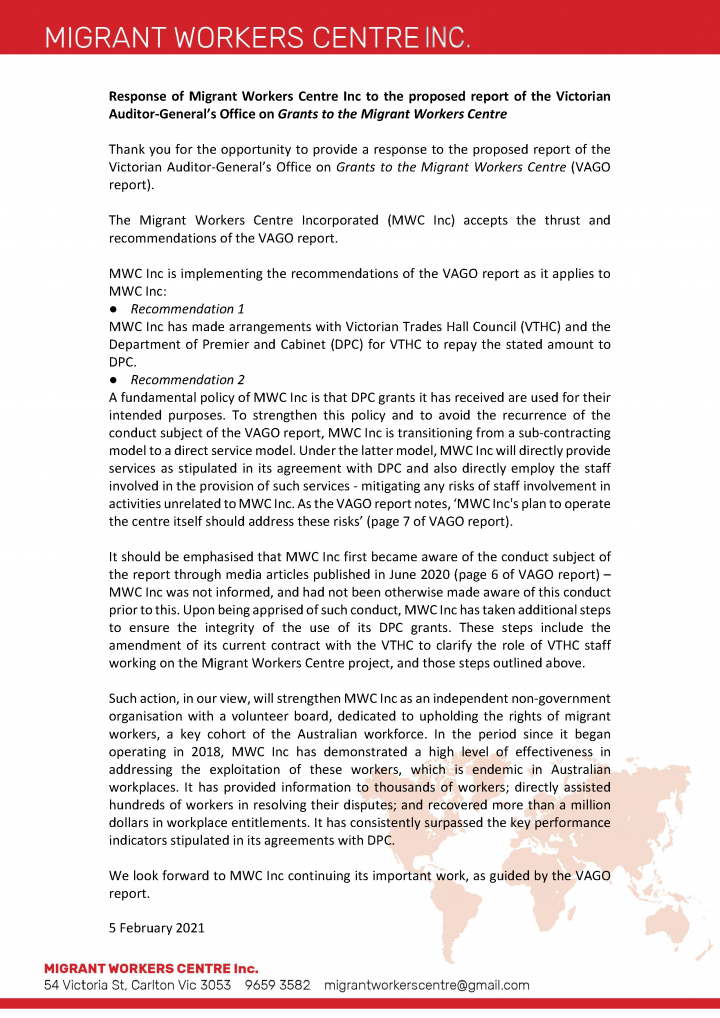 Response provided by the Secretary, VTHC 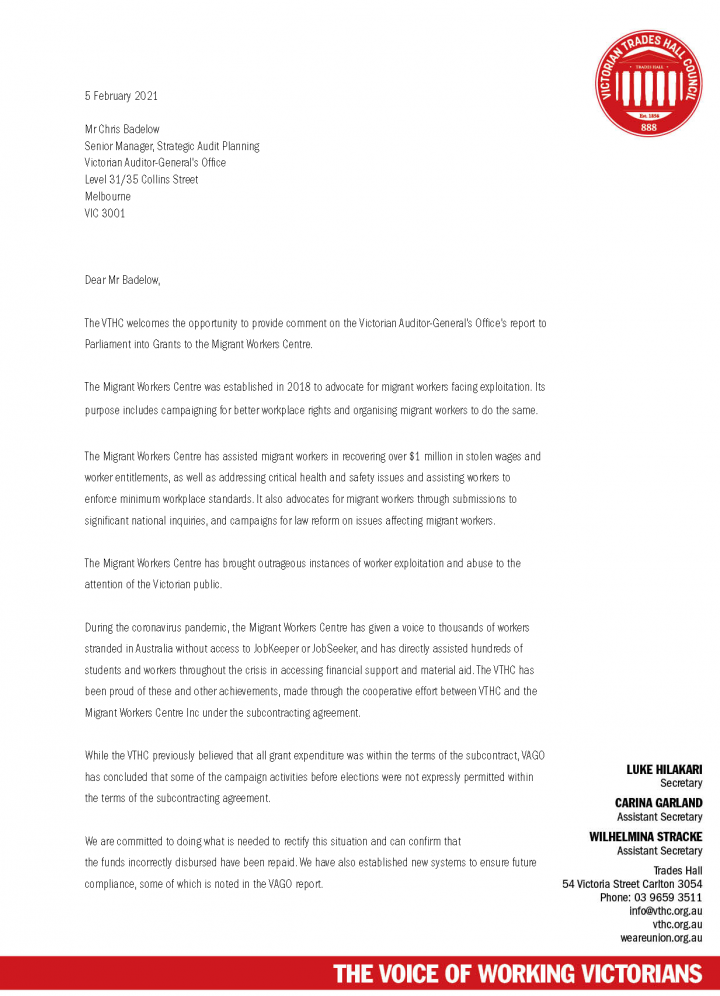 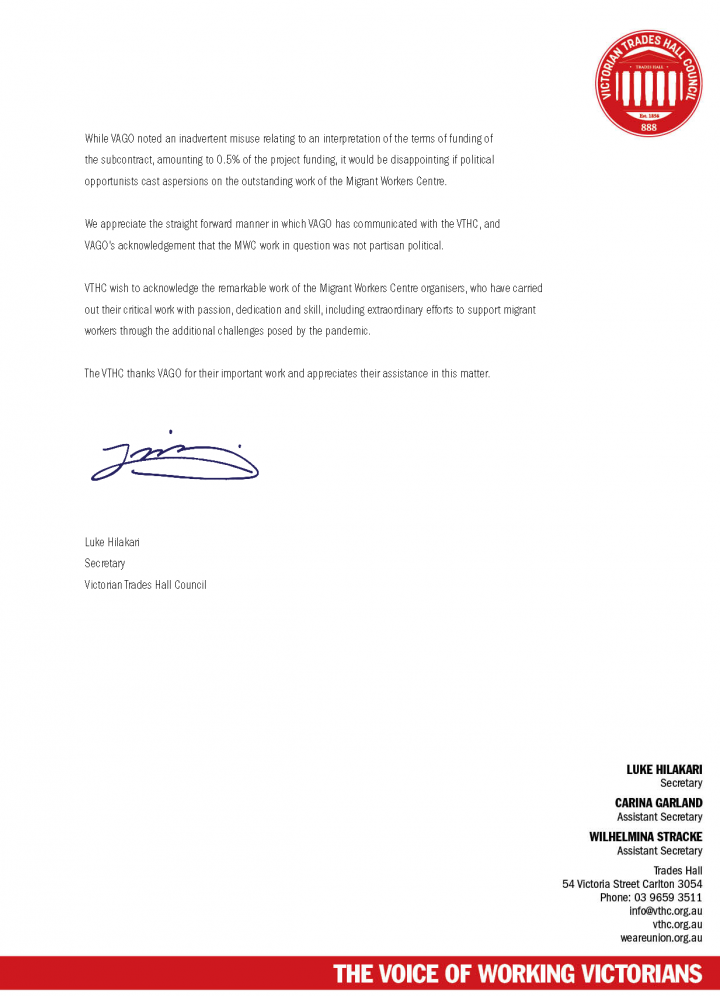 Matters referred to the Auditor-General

In June 2020, the Auditor-General received a referral that included allegations that:

(a)In accordance with the Audit Act 1994 we included MWC Inc and VTHC in scope as entities receiving a financial benefit from DPC for a particular purpose.