1.1 Regional Victoria's role in the economy and community

Since 2005–06, regional Victoria has experienced negative GRP growth in six years and growth of less than 1 per cent in another four. The gap in GRP per person between regional Victoria and metropolitan Melbourne is increasing, as shown in Figure 1A. 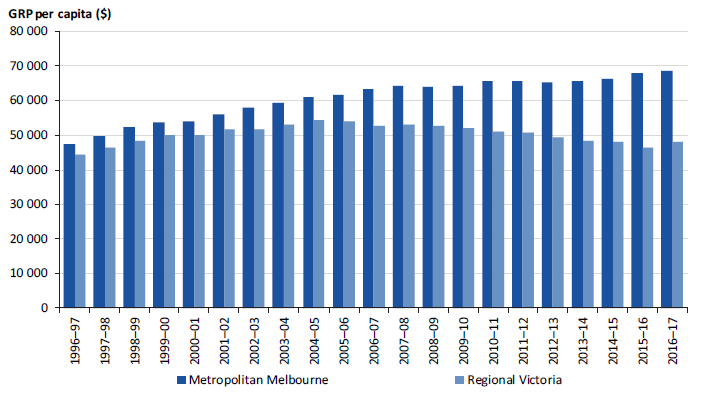 Figure 1B
Population growth in regional Victoria and metropolitan Melbourne 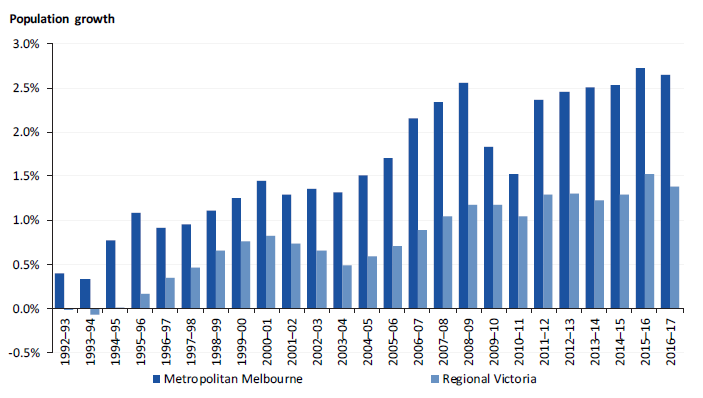 RDV manages RJIF under the RDV Act. The government created each fund through amendments to the RDV Act—most recently, the Regional Development Victoria Amendment (Jobs and Infrastructure) Act 2015, which simultaneously established RJIF and abolished RGF.

Section 17 of the RDV Act sets out the five purposes for which grant funds can be used to support regional Victoria:

Schedule 2 of the RDV Act lists the 48 LGAs and six alpine resorts in regional Victoria that can apply for RJIF grants.

The RDV Act requires the Minister's approval for all grants. The Treasurer must also approve grants of more than $5 million. The RDV Act has provisions for the Minister to delegate this power to RDV, however this has not occurred.

DTF's Standing Directions of the Minister for Finance 2016 details agency responsibilities when distributing 'discretionary financial benefits'. Under these directions, agencies must maximise value for money and have effective and efficient administrative controls over their grant programs.

The standing directions require agencies to apply DTF's 2016 Investment principles for discretionary grants when developing and managing grant programs. These principles recommend agencies minimise administration costs, ensure that recipients' compliance costs are proportionate and that the program does not overreach into local governments' areas of responsibility or create an ongoing need for funding.

The Commonwealth Department of Finance produced the Commonwealth Grants Rules and Guidelines 2017 (the commonwealth guidelines), which—although only directly applicable to Commonwealth agencies—supply further guidance relating to the design, implementation, governance and transparency of grant programs.

Note: RGF was an eight-year program that planned to distribute $1 billion in grants, but RJIF replaced it in 2015–16. At the time the government ceased RGF it had allocated up to $570 million for grants.

The government set up RJIF with the aim of 'growing jobs, building infrastructure and strengthening communities in regional Victoria'.

RJIF aims to deliver $500 million in grants over four years to 2018–19. Councils, businesses and non-government organisations in Victoria's 48 regional LGAs can apply for grants. 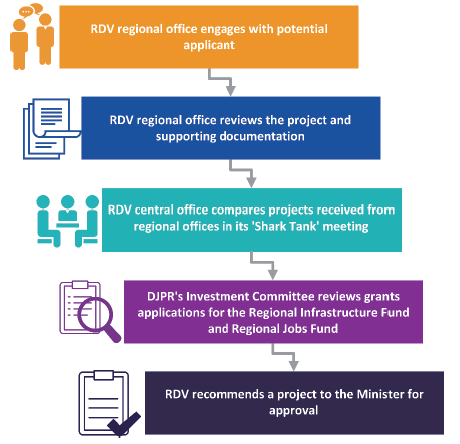 DJPR's Investment Committee evaluates applications for the Regional Jobs Fund (jobs fund). It includes senior public servants and independent experts responsible for assessing a range of investment opportunities. It meets regularly and is the final stage in deciding whether to recommend a grant to the Minister for consideration.

The Investment Committee has reviewed applications for both the Regional Infrastructure Fund and the jobs funds since 2017 to improve the consistency of decision-making between the two programs.

RDV refers applications for the communities plan directly to the Minister without the Investment Committee's consideration as these grants are smaller and focused on community building activities.

RDV uses the GEMS case management system to manage RJIF and to capture all information relating to a grant—enquiries and engagement with organisations, applications and supporting documents, assessments, ministerial briefs, grant agreements, implementation activities and payment. RDV's monitoring and reporting is based on the data entered in GEMS.

Many agencies play a part in social and economic development in regional Victoria.

RDV is the lead agency responsible for facilitating development across regional Victoria and has administered more than $1 billion through grant programs since 2011. RDV was part of the former Department of Economic Development, Jobs, Transport and Resources until 1 January 2019. Since then, RDV has been part of DJPR.

Councils have an obligation under the Local Government Act 1989 to promote the social, economic and environmental viability and sustainability of their municipal districts.

We have audited two of RDV's previous regional funds.

Our 2015 audit Regional Growth Fund: Outcomes and Learnings examined RDV's management of RGF. It found that due to weaknesses in the fund's design and implementation, RDV could not show it achieved value for money or the program's objectives.

1.7 Why this audit is important

The ongoing development of Victoria's regional areas is important to the state's economic and social future. The regional economy plays a vital role in the overall Victorian economy.

Our audits of previous programs found deficiencies in their administration and made recommendations for the design of RJIF. It is important to assess if RDV is applying the lessons learned from its previous funds to improve its management of RJIF, and whether the state's current and historical investments in the regions is achieving the intended objectives.

The audit evaluated whether state investment through various funds has improved outcomes in regional Victoria. We evaluated RDV's implementation of RJIF by focusing on its design, assessment processes, monitoring and evaluation. The audit also examined how RDV has evaluated earlier grant programs to ensure it is implementing better practice and helping drive regional development.

We engaged with five councils of varying sizes and regional stakeholders to gain added perspectives on RDV's effectiveness in administering RJIF.

We conducted our audit in accordance with Section 15 of the Audit Act 1994 and the Australian Auditing and Assurance Standards. The cost of this audit was $445 000.