Over 99 per cent of people sentenced to prison in Victoria will be released, so successfully rehabilitating prisoners is in the public’s interest. Wherever possible, rehabilitation involves preparing prisoners to reintegrate and make a meaningful contribution to the community.

Rehabilitating offenders is complex and extends beyond the role of the criminal justice system. Many factors influence a prisoner’s ability to positively reintegrate into the community. CV focuses on the following areas:

Victorian prisons provide pre and post-release programs that target these areas and other risk factors.

Recidivism is measured in a range of ways. Measures can be based on different types of crime and time frames after a prisoner’s release, and may be triggered by rearrest, reimprisonment, or self-reported criminal behaviour.

The Australian Institute of Criminology (AIC) has established that the following factors increase the likelihood of a person reoffending:

The Productivity Commission annually reports on national and state return to prison rates in its Report on Government Services (RoGS).

RoGS’s measures of reoffending rates include the proportion of adults:

Between 2001 and 2010, the rate of offenders who returned to prison within two years fell to a low of 33.7 per cent in Victoria. This change was largely consistent with national trends. Since 2010, the rate has increased, sitting above 40 per cent for the past five years. In 2018–19, Victoria’s return to prison rate was 43.3 per cent, which is slightly above its target of 41 per cent.

Figure 1A
Comparison of return to prison rates within two years 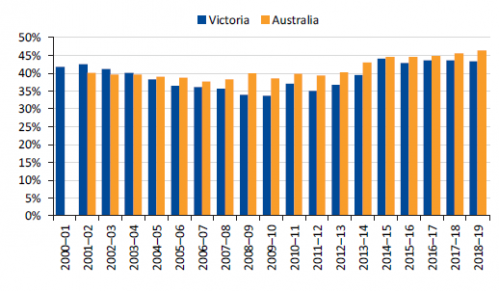 Note: Australian data for 2000–01 is unavailable.
Source: 2020 RoGS and the Department of Justice and Community Safety Annual Report 2018–19.

Increased demand on the justice system

The number of remand prisoners in the Victorian system has increased due to multiple legislative and procedural changes over the past five years. These changes include reforms to bail and parole processes, changes to sentencing laws and the abolition of suspended sentences and home detention. Population growth and significant increases in police resourcing have also led to more crime being detected.

Ravenhall is a men’s medium-security prison that is privately operated by GEO. Ravenhall first received prisoners in November 2017. It opened with 1 000 available prisoner places but had the capacity for 1 300. This included 75 forensic mental health beds.

The state designed Ravenhall to have a targeted focus on rehabilitation and reducing recidivism. The prison’s physical design and services were guided by this goal. Ravenhall’s seven key focus areas are shown in Figure 1B. 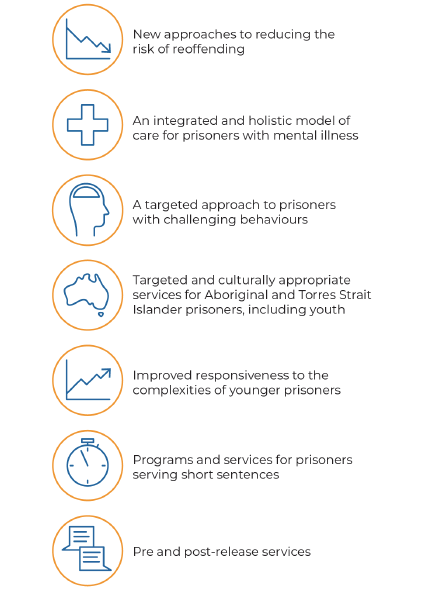 Source: VAGO, based on documents provided by CV.

Source: VAGO, based on GEO.

GEO provides support services within the context of its Continuum of Care model. Prisoners transition through the model from their reception at Ravenhall to their release. After their release, they can continue to access services with the same clinical staff.

CV monitors and measures the performance of all private prisons against the SDOs and KPIs outlined in each operator’s contract with the state. These SDOs and KPIs relate to:

In its contract with GEO for Ravenhall, the state has developed specific KPIs to measure prisoner reintegration and recidivism outcomes.

Source: VAGO, based on documents provided by CV.

GEO began reporting its performance against KPI 15 to CV for the period of April to June 2018, which was Ravenhall’s third quarter of operation.

KPI 16 measures the rate at which prisoners released from Ravenhall return to any Victorian prison within two years after their release. This KPI is designed to indicate the effectiveness of Ravenhall’s rehabilitation services in reducing recidivism compared to the broader prison system.

Source: VAGO, based on CV documents.

Private prisons, including Ravenhall, are eligible for a quarterly performance payment, which is made up of six components. One of these components is the service-linked fee, which pays prisons for successfully achieving their KPIs and SDOs.

Ravenhall’s KPI 15 and 16 are incentive-based payments. This means that GEO is financially rewarded if it achieves its KPIs, but not financially penalised if it does not. GEO can receive performance payments of up to $1 million per year for each of its KPI 15 and 16 targets.

Ravenhall is the first prison in Australia to have service payments linked to its recidivism outcomes. If successful, the state can learn from Ravenhall and potentially roll out this incentive across Victoria.

While Ravenhall was initially contracted to hold 1 000 prisoner places, it was built with the capacity for 1 300 in case the state required them. These additional 300 places were activated in July 2018—nine months after Ravenhall commenced operations.

As of 31 December 2019, CV and GEO are finalising a contract variation to further increase the number of available prisoner places at Ravenhall to above its design capacity of 1 300.

Remand prisoners present different challenges and risks than sentenced prisoners, such as cost, transition needs, family support and facilities. Remand prisoners have ongoing legal matters and may need to be transferred to and from prison more often. This creates a more unsettled prison environment.

Based on their presumption of innocence, remand prisoners are entitled to less restrictive conditions and have different rights to sentenced prisoners. For example, remand prisoners are not required to participate in programs or work. They often have significant drug and alcohol abuse issues and a higher prevalence of physical and/or mental health issues.

1.5 Roles of agencies and associated entities

CJS is a business unit within DJCS. It is responsible for custodial operations, offender services, security and intelligence, and sentence management. CJS also includes Justice Health and Justice Services.

CV sits within CJS and is responsible for establishing, managing and overseeing the security of Victoria’s prisons in line with their legislative requirements. CV’s key functions include:

CJS represents the state in all its contracts with privately operated prisons, including Ravenhall. It manages these contracts to ensure that private operators adhere to the required standards and performance expectations.

GEO privately operates Ravenhall as part of a public–private partnership. Under its contract with the state, GEO provides accommodation services (suitable for prisoner containment) and correctional services (to maintain the safety, security and welfare of prisoners). These services must comply with the relevant state legislation and policies.

GEO also provides prisoners with education and training, employment within prison, health services, and rehabilitation and reintegration interventions and services.

Our 2018 audit Managing Rehabilitation Services in Youth Detention examined how well rehabilitation services were meeting the developmental needs of children and young people in the youth detention system and reducing their risk of reoffending.

We found that young people in detention had not been receiving the rehabilitation services they were entitled to and necessary for their needs. As a result, youth detention had not been effectively reducing reoffending because correction facilities were not providing adequate services, case management and needs assessments. Correction facilities were also prioritising security over offenders’ education and health.

1.7 Why this audit is important

Ravenhall is an opportunity to trial new methods to reduce reoffending. This is a core principle of the criminal justice system and a strategic priority for CV.

Ravenhall is also the first prison in Australia to have financially incentivised KPIs for reducing recidivism. It is in the state’s interest to ensure that these measures promote best practice in prisoner rehabilitation and reintegration. If this approach is effective, then it could be rolled out across Victoria to help reduce the high running costs and overcrowding of prisons.

We intend for this audit to be longitudinal and conducted in two phases.

In this first phase, we have sought to identify any early gaps or weaknesses in the design and implementation of Ravenhall’s rehabilitation initiatives. We have also examined the appropriateness and effectiveness of CV and GEO’s proposed performance monitoring and evaluation framework, including the KPIs.

The second phase of this audit will assess if GEO has achieved its proposed outcomes to reduce reoffending at Ravenhall compared to other prisons. In the second phase, we will report on the impact of GEO’s new model and assess if the state has achieved a return on investment for this innovative approach in prison management.

In this audit we examined if CV and GEO have developed best practice prisoner management at Ravenhall to rehabilitate offenders and reduce recidivism. We also assessed if there are effective performance and evaluation frameworks in place to measure these outcomes.

To do this we:

We conducted our audit in accordance with the Audit Act 1994 and ASAE 3500 Performance Engagements. We complied with the independence and other relevant ethical requirements related to assurance engagements. The cost of this audit was $402 000.

The rest of this report is structured as follows: