In our 2014 audit, we found situations where a CoM overseen by DEPI was not the most appropriate arrangement for managing a Crown land reserve:

Figure 2A summarises our assessment of DELWP's progress in implementing the two recommendations from the 2014 audit that relate to the land management model, as well as progress against the actions it committed to and the updates provided through our annual follow up survey.

DELWP is considering better arrangements for managing Crown land in some coastal areas, including amalgamating CoMs. A four-year project to streamline land management arrangements across three coastal areas will likely provide some important lessons about the amalgamation process and community engagement. Lessons learnt could be used in other areas, both coastal and beyond, where there are issues with sustainability and appropriateness of the CoMs to manage their reserves. It will be important for DELWP to evaluate and capture these experiences and communicate them for potential broader use.

DELWP has increased its support for volunteers involved in coastal land management—its Coastcare program now includes a volunteer forum, community grants and volunteer awards. Volunteer recognition for non-coastal CoMs varies greatly across different DELWP regions, from established programs to none at all.

DELWP has targeted its support activities to coastal CoMs because it considers them a higher risk. It does not plan to extend this support to all CoMs.

At the local level, DELWP has been engaging with councils to understand the issues they face in supporting CoMs, and to develop solutions around individual reserves as opportunities arise:

DELWP has advised that this proactive work with councils is occurring frequently, but poor record-keeping practices limit its ability to demonstrate what is being done.

Since our 2014 audit, six Crown land reserves have been transferred from a CoM to a more appropriate land manager. However, these changes occurred reactively, often at points of crisis. Three of these transfers occurred due to the CoM not functioning adequately. One resulted from community and council concerns about public safety on the reserve and an urgent need for maintenance of the reserve. The other two occurred in response to a request from the relevant local council to facilitate its plans to develop or manage the reserve.

DELWP has not taken strategic action to identify where Crown land reserves could have more appropriate land managers, and it continues to manage land even when it knows that it is not the most appropriate manager.

During this audit, DELWP advised us that 13 local councils have communicated significant concerns about supporting local CoMs—in some instances, the councils have removed insurance coverage and maintenance support for relevant reserves. The City of Bendigo has communicated its concerns to the responsible minister. During the audit, local government and DELWP were considering a joint workshop to discuss these issues.

At the annual meeting of the Municipal Association of Victoria—the peak body for local councils—in both 2016 and 2017, local councils passed resolutions calling on the state to provide greater support for CoMs managing Crown land reserves, and to work together to access resources.

DELWP has not made any progress in realigning reserves to other government departments whose portfolios better align with the use of the Crown land reserves—for example, transferring hospitals to the Department of Health and Human Services or racing tracks to the Department of Justice and Regulation. DELWP met with the Department of Health and Human Services to discuss the resource burden of leasing arrangements for hospitals. Beyond this, however, we found no evidence that DELWP had broader discussions with any department about transferring the management of Crown land reserves that better aligned with the department's portfolio.

Further, DELWP has not sought to understand where volunteer capacity is inadequate or where the CoM model is not sustainable or effective. DELWP could not advise us how many vacant positions there are on CoMs.

We surveyed volunteers in June 2018. Of the 462 respondents:

There are many towns where CoMs need to draw large numbers of volunteers from small populations. For example, in the town of Granya in north-eastern Victoria, with a population of 99 people, there are four CoMs comprising 23 volunteer positions—equivalent to 23 per cent of the population. Granya has separate CoMs for the public hall, the public park, the recreation reserve and the local history museum.

Figure 2B shows there are nine towns where filling volunteer positions across their multiple CoMs would require more than 20 per cent of the population to volunteer. This type of analysis could help DELWP to identify priority risk areas for the sustainability of CoMs and opportunities for amalgamations. This is particularly important given our 2014 audit's findings about the ageing profile and declining number of volunteers. 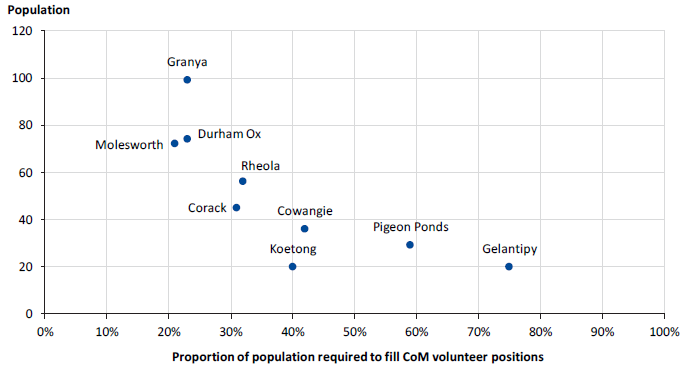 Note: This figure shows only those towns with the highest ratios and with multiple committees. There are additional towns that have very high ratios but only one committee.
Source: VAGO based on DELWP's 'Portal' database of CoMs and Crown land reserves as at March 2018.