In this Part we detail the outcomes of our financial audits of the local government sector for the 2015–16 financial year. We discuss the main reasons for the combined net result achieved by the 79 councils, and focus our analysis on the five council cohorts.

We also comment on the internal control matters we found during 2015–16, and provide an update on matters raised in previous audits.

Independent audit opinions add credibility to financial reports by providing reasonable assurance that the information reported is reliable and accurate. A clear audit opinion confirms that the financial report presents fairly the transactions and balances for the reporting period, in accordance with the requirements of the applicable accounting standards and relevant legislation.

All 79 councils were issued with clear audit opinions for their financial statements for the financial years ended 30 June 2015 and 30 June 2016.

We issued all 79 councils with clear audit opinions for their performance statements for the financial years ended 30 June 2015 and 30 June 2016.

Figure 2A summarises the key financial balances of the local government sector—comprising the 79 councils—for the financial year ended 30 June 2016. The sector generated a net surplus of $1.6 billion ($1.5 billion in 2014–15).

Figure 2B shows the net result of the cohorts for the financial years 2011–12 to 2018–19. The information for this figure, and all analysis in this Part, has been drawn from: 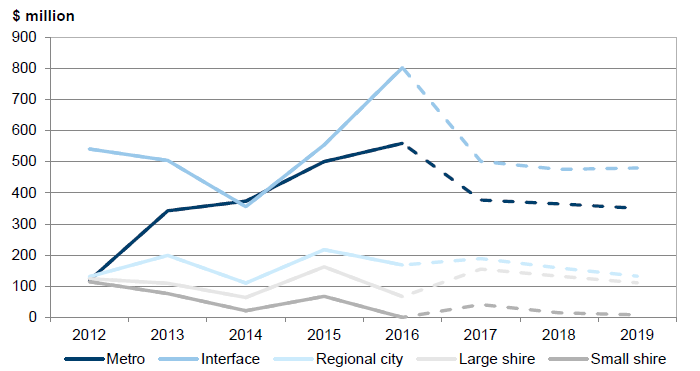 The net result for the sector at 30 June 2016 was a $100 million increase on the prior year. Two key revenue changes affected this result:

The combined net result of the 79 councils is influenced by the timing of payments of the financial assistance grant from the Commonwealth Government—received through the state government. This grant is provided to councils each year, to be used towards the provision of council services. Under Australian Accounting Standard AASB 1004 Contributions, councils are required to recognise this income in the financial year it is received, even if it relates to the provision of services in the following financial year.

In recent financial years, councils have sometimes received a portion of the grant early. The first payment for 2015–16 was received in June 2015. This resulted in additional revenue of $269.8 million, which councils would ordinarily have recorded in 2015–16, being recorded in 2014–15.

In 2014, the Commonwealth Government announced that it would stop indexation of the financial assistance grant until 2017–18. This means that the total value of the grant provided to Victoria will be similar each year until 2017–18, and may not reflect the cost increases councils incur as they provide services to their communities. As a result, councils will need to ensure they have other funds available to meet any shortfall in grant funding.

Developer contributions are received either as cash or physical assets (in-kind contributions) when a new community has been built. The council then maintains the assets on an ongoing basis. Items include infrastructure—footpaths, roads, drainage—or community buildings, such as a school or library. Alternatively, the developer will provide cash to enable the council to build these items as required. Both types of contribution are recognised as revenue when they are handed over to the council.

While total in-kind developer contributions are recognised as revenue up front, councils have an ongoing obligation to maintain the assets they receive and also to spend developers' cash contributions on community assets.

Interface councils generated the largest surplus in most of the last five financial years. This reflects their 'growth council' status—which means that they undertake more community development than other councils. This results in these councils receiving more developer contributions than other councils each financial year. The peak in 2015–16 was driven by $692.4 million in contributions, a 54.7 per cent increase on the $447.7 million they received in 2014–15.

We report the weaknesses we find in a council's internal controls to the mayor, chief executive officer and audit committee in a management letter.

In 2015–16, we reported 211 issues that we classified as extreme, high and medium risk in our management letters across the 79 councils. Figure 2C summarises the issues by area and risk. Appendix C provides additional information on our risk ratings, and our expected time lines for resolving issues.

Reported issues by area and risk rating for 2015–16

Note: Issues rated as low risk are excluded from this analysis.

We found the key areas of weakness across the councils relate to the areas of information systems (IS) controls and fixed assets.

IS are an integral part of day-to-day council processes. In particular, each council has several key systems that feed into the financial reporting processes. It is important that data held within these systems is secure, and the risk of an unauthorised person accessing the data and systems in minimised.

Across the 79 councils, we raised 46 issues relating to:

All of these issues increase the vulnerability of council IS systems to a potential loss of data or the failure of a particular system, which would reduce the integrity of the data available to the council, and potentially affect their financial information.

We raised 90 issues regarding the fixed assets and the valuation framework in place across the 79 councils, including failure to:

These issues are discussed further in Part 4 of this report, where we assess the non-current physical assets valuation frameworks in place across the 79 councils.

Note: Issues rated as low risk are excluded from this analysis.