Economic prosperity is important to a community's wellbeing. The World Bank describes local economic development as building the economic capacity of a locality to improve its economic future and the quality of life of its citizens. In this process, public, business and community sector partners work collectively to create better conditions for economic growth and job creation.

Every community has unique conditions that affect its development and should shape the design and implementation of a local economic development strategy.

Victoria is home to a quarter of Australia's population and contributes around 22 per cent to the Australian economy.

One of the key economic performance measures at the state level is gross state product (GSP). It represents the total value of all goods and services produced in the state during a given year. In 2015–16, Victoria's GSP was $374 billion. 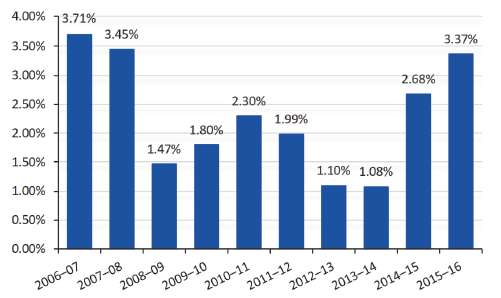 Gross regional product (GRP) measures each local government area's contribution to the state economy. Figure 1B shows that the 31 metropolitan councils account for 81 per cent of the state's GRP. 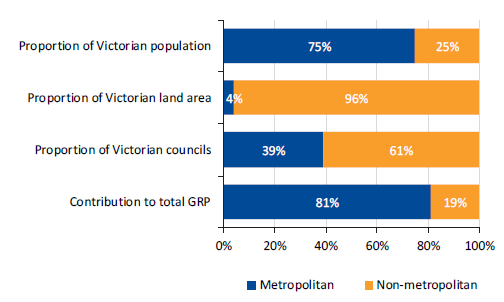 Source: VAGO, based on RDV and Australian Bureau of Statistics data. 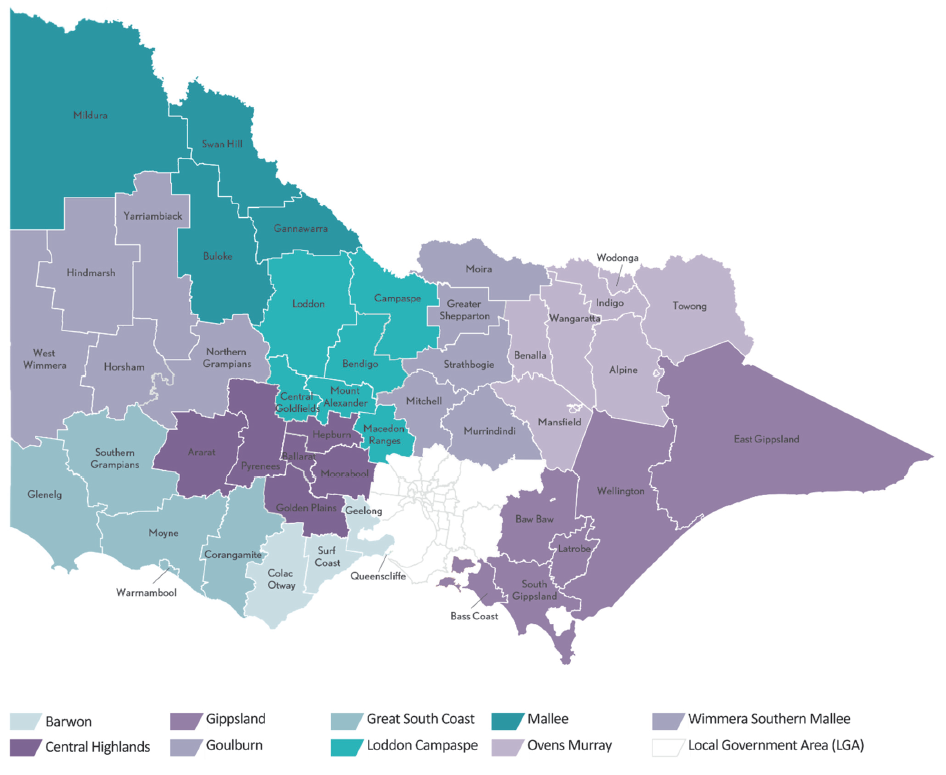 Victoria's Regional Statement: Your Voice, Your Region, Your State (Regional Statement) acknowledges the contribution regions make to Victoria's economy and its way of life. The statement introduces the nine regional partnerships—which aim to increase collaboration between communities, industry, businesses and government—to address the most important challenges and opportunities in each region. The partnerships seek to have more regional community views represented in government decision‑making.

Economic growth across partnership groups varies, ranging from an average GRP decline of 11 per cent for the Mallee group councils to an average increase of 34 per cent in the Western group, as shown in Figure 1E. The GRP growth for the state in the same period was 21 per cent. 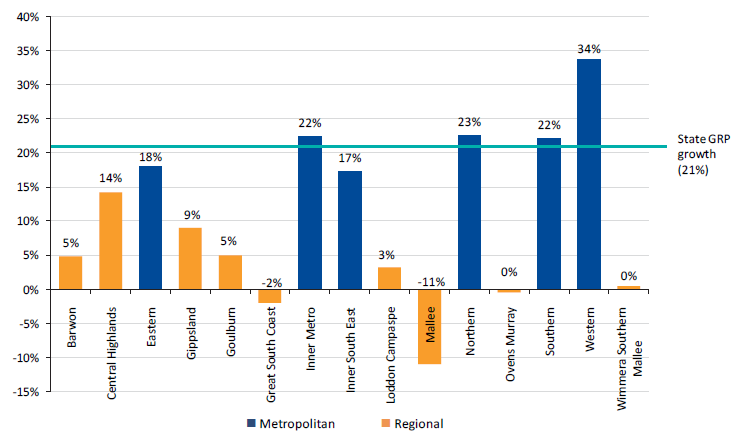 Note: Growth represents average for councils in that partnership. See Appendix A for individual council growth.

Source: VAGO, based on RDV data.

Source: VAGO, based on RDV and Australian Bureau of Statistics data.

For audited councils, economic growth ranged from a decline of 15 per cent in Corangamite to an increase of almost 70 per cent in Melton. Appendix B has economic and population growth data for all 79 councils.

The powers and accountabilities of local government are set out in the Act. According to the Act, councils' primary objective is to achieve the best outcomes for the local community, taking into account the long-term and cumulative effects of decisions. To achieve this objective, councils must have regard to:

Local government also has a number of specific powers that help facilitate economic development. These include entrepreneurial powers, the power to sell or lease land and the power to enter into contracts, which may also be subject to specific conditions and limitations.

Strategic planning is an essential aspect of economic development. There are three planning requirements under the Act: 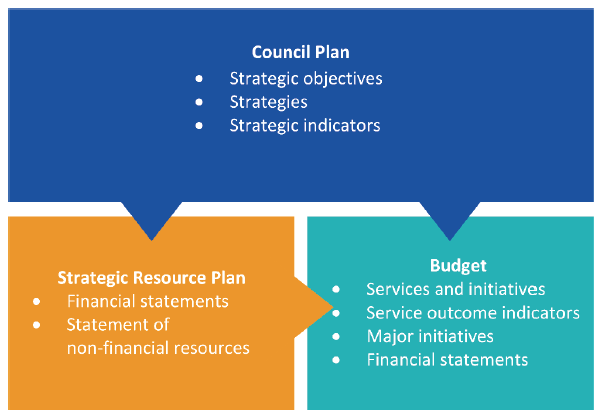 Land use planning is an effective tool that councils can use to facilitate economic development in their municipality. The purpose of the Planning and Environment Act 1987 is to 'to establish a framework for planning the use, development and protection of land in Victoria in the present and long-term interests of all Victorians'.

Section 4(b) of the Planning and Environment Act 1987 lists the objectives of the planning framework, including to 'enable land use and development planning and policy to be easily integrated with environmental, social, economic, conservation and resource management policies at State, regional and municipal levels'.

In 2015, the government released the Regional Statement, which builds on a number of previous strategies to drive regional economic development. It acknowledges the contribution regional Victoria makes to Victoria's economic strength and commits to delivering a stronger voice for regional communities in government decision-making across all areas of policy and service delivery. The key reform of the Regional Statement was the introduction of nine new regional partnerships across the state to help drive economic development in regional Victoria—as discussed in Section 1.1.

The government developed the Regional Statement in response to the findings of the 2015 Regional Economic Development and Services Review.

The relevant planning authority—usually the local council—must select the appropriate zones and overlays from the Victorian Planning Provisions for inclusion in their planning scheme.

The local community elects a council to govern the municipal district. Under the Act, councils must have regard to their district's social, economic and environmental viability and sustainability.

Councils' contributions to the Victorian economy are significant, including more than 43 000 employees in the sector, managing over $84 billion in public assets and spending more than $7 billion annually on services.

Under the Act, the roles of a council include:

DEDJTR works across many portfolios to increase jobs, investment, exports and opportunities in Victoria. DEDJTR aims to stimulate innovation, competitiveness, confidence and sustainability in Victoria's economy.

RDV works with Regional Development Australia (RDA) to facilitate regional engagement and economic development. RDA is a Commonwealth Government initiative that involves all levels of government in supporting regional development.

In 2016, the Premier of Victoria created the suburban development portfolio within DELWP. The priorities for the portfolio are to:

LGV provides policy advice, oversees legislation and works with the Minister for Local Government and Victoria's 79 local councils to support responsive and accountable local government services. Along with providing policy advice to the minister, LGV oversees the administration of the Act and other relevant legislation.

1.4 Past reviews and inquiries

Past reviews and inquiries into local government and its contribution to economic development have identified the importance of clearly defined outcomes, performance reporting, partnerships, and utilising a range of activities to drive economic development.

In 2008, the Victorian Parliament released its report Inquiry into Local Economic Development in Outer Suburban Melbourne. The report concluded that there is no 'silver bullet' solution to generating local economic development. Rather, sustainable jobs and the economic benefits that flow from them generally result from well-researched, carefully planned and adequately resourced programs implemented in partnership with government at all levels. The report made 170 recommendations.

Inquiry into Regional Centres of the Future, 2009

In 2009, the Victorian Parliament released its report Inquiry into Regional Centres of the Future. The inquiry sought to identify and consider measures to build on the government's investment in regional Victoria, through the further development of regional centres. The report identified that regional centres should be places of economic, environmental, social and cultural innovation that enable regional Victoria to meet the challenge of predicted future population growth. The report recommended that government redirect its energy and its funding efforts to regional centres, as a priority.

In 2013, the Victorian Parliament released its report Inquiry into Local Economic Development Initiatives in Victoria. The report concluded that local government is well placed to drive local economic development because of its proximity to the community, local businesses and organisations. However, it found a range of barriers including issues with the Victorian planning system, occupational health and safety compliance issues, a lack of access to skilled workers, ineffective regional collaboration, and insufficient engagement with the private sector. The inquiry found that few local councils have adopted an integrated, whole‑of‑government approach to economic development.

The report made 43 recommendations, including:

In February 2015, the Minister for Regional Development announced a review of DEDJTR's regional economic development strategy and service delivery model. The aim of the Regional Economic Development and Services Review was to identify best practice, evidence-based policy directions to foster regional growth and job creation.

The review developed a new approach to regional governance and service delivery and recommended a new approach to regional development. In response to the review, the government established regional partnerships to increase collaboration between communities, industry, businesses and government. It also recommended 48 policy reforms across transport and planning, industry and innovation, trade and investment, education and skills, and regulation.

1.5 Why this audit is important

Local economic viability and sustainability affects Victorian communities and their wellbeing. Given the important role of local government in facilitating economic development, this audit aims to assist councils and, in turn, their communities by identifying areas for improvement and sharing examples of better practice.

1.6 What this audit examined and how

We assessed whether councils' economic development activities improve the economic viability and sustainability of their municipalities. Specifically, we assessed whether councils' actions to improve economic viability and sustainability are strategic and achieve their intended outcomes. We also assessed the role agencies like RDV and LGV play in providing guidance and support to the local government sector.

Our preliminary analysis, which drew on multiple indicators of economic development, identified economic sustainability and capacity risks in large and small shire councils. The analysis also identified accelerated growth risks for interface councils—the 10 councils surrounding metropolitan Melbourne. We chose five councils to include in this audit that either did well or poorly on the key indicators:

We visited each council and met with members of the council's economic development team and a selection of internal and external partners, including RDV regional offices. We consulted with a range of stakeholders, including industry groups, peak bodies and business owners in each area. We also examined supporting documentation such as economic assessment material, guidelines, strategies, action plans, monitoring reports and available data.

We conducted our audit in accordance with Section 15 of the Audit Act 1994 and ASAE 3500 Performance Engagements. We complied with the independence and other relevant ethical requirements related to assurance engagements. The cost of this audit was $570 000.