The Act states that the primary objective of a council is to endeavour to achieve the best long-term outcomes for the local community, including by:

This part of the report assesses whether councils are implementing and reviewing their economic development strategy and whether council actions are achieving their intended outcomes.

In Part 2 of this report we discussed the first four steps of the World Bank's local economic development process, which focuses on strategic planning. The final two steps in the process are highlighted in Figure 3A.

Implementing the local economic development strategy requires councils to identify and allocate the resources—financial and human—needed to support its delivery, and to develop individual project action plans.

We examined the economic development budgets for the five audited councils, and found that the budgets mostly comprise funding for business support activities including:

Councils prioritise budgets based on their municipality's identified strengths. For example, Bass Coast identifies tourism as its key strength and allocates the majority of its economic development budget to deliver its tourism and events activities. These include:

VGC allocates financial assistance grants from the Federal Government to local councils in Victoria. To do this, VGC collects data from a range of sources, including directly from councils.

Lack of consistent data for economic development expenditure, across audited councils, resulted in the audit team relying on VGC data on business and economic services as a proxy.

According to VGC data, in 2015–16, Victorian councils spent $866 million on business and economic services including:

Figure 3B
Expenditure on business and economic services for audited councils, 2015–16

Without actual comparable data, it is difficult to ascertain whether this expenditure is sufficient. Based on our site visits, interviews and discussions with councils and stakeholders it is clear that economic development is high on councils' agenda and councils actively allocate resources towards it.

One of the opportunities that exists for regional councils to promote economic development in their municipality is to access funds from the RJIF. The RJIF, administered by RDV, is the Victorian Government's overarching regional development package. It focuses on major projects, employment and communities. There are three streams within RJIF:

By 31 December 2017, the RJIF had contributed $317.6 million towards 467 projects in regional city and rural councils. Of these, 265 projects were in rural councils. Figure 3C shows RJIF funding, by the nine regional partnership groupings. 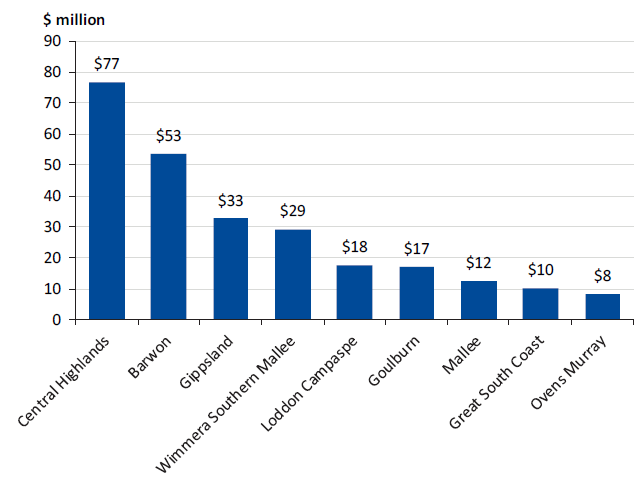 Note: The RJIF was officially launched in July 2015.

Each partnership group includes at least one regional city. Collectively, Ballarat City Council and Geelong City Council received 47 per cent of the RJIF allocation to regional and rural councils.

Source: VAGO, based on information provided by Bass Coast.

One of the three RJIF streams is the RIF. The RIF invests in major infrastructure projects to create or enhance the conditions for economic growth in regional Victoria and build diversified, resilient and sustainable regional economies. The RIF provides funding under four program streams:

For the four rural councils in this audit, RDV identified $8.5 million in grants for which councils had either not applied, or had applied but failed to meet the funding criteria as of December 2017. This was for 40 potential projects valued at more than $46.5 million.

RDV is working to identify the reasons why some councils do not apply for grants, and why applications often fail to meet the criteria. Most of the audited councils and RDV suggest that a lack of staff with skills and experience in developing business cases is a possible factor. However, Southern Grampians advises that inadequate and delayed feedback from RDV is another reason for the under‑utilisation of grants.

While RDV is willing to assist councils in determining the most appropriate funding stream to meet their project requirements, RDV considers that it is councils' responsibility to make sure they sufficiently resource and position themselves to compete for project funding.

Having sufficient and appropriately trained staff is important for an effective economic development strategy and enables councils to better access available grants.

In all audited councils, there were dedicated economic development staff. The number of staff varied based on the size of the councils. For example, Loddon—the smallest council in our sample—had fewer than two full-time-equivalent team members responsible for economic development.

Economic development staff undertook varied learning and development activities. Most of the councils had accessed courses or training provided by:

Councils can use a combination of their statutory powers and other innovative methods to drive local economic development.

We found some innovative examples of councils promoting economic development, which are discussed in the case studies in Figure 3E and 3F.

Source: VAGO, based on information provided by Southern Grampians.

Source: VAGO, based on information provided by Melton.

Use of council powers to promote economic development

The Act provides councils with 'the power to do all things necessary or convenient to be done in connection with the achievement of its objectives and the performance of its functions'.

The Act also specifies powers that councils may use including:

The current review of the Act is considering the scope of these powers.

The case study in Figure 3G is an example of a council using its investment powers to facilitate economic development.

Source: VAGO, based on information provided by Corangamite.

Reluctance to use incentive-based powers in certain circumstances

The audited councils advised that they are generally reluctant to use incentive‑based powers—to defer, waive or apply special rates and charges—particularly when using those powers may be perceived as promoting private, as opposed to public, interests.

Councils were also mindful of how existing businesses may perceive this incentive‑based support for new prospective investors. Councils prefer that investors choose to invest in their area because of recognised opportunities. Bass Coast advised that smaller councils have less capacity to use their incentive powers.

However, these problems should not deter councils from exploring how they can use their powers innovatively to facilitate economic development, while also mitigating potential risks.

Under section 3D of the Act, a council is responsible for establishing strategic objectives and monitoring their achievement.

Economic development strategies are long-term in nature, but the council plan—which an incoming council uses to identify its vision for the municipality—only covers four years. This creates an inherent inconsistency as councils' economic development priorities change over time.

For example, the incoming Corangamite council has discontinued the support fund discussed in Figure 3G, 'due to the risks involved'. Similarly, Southern Grampians developed a 10-year economic development strategy with more than half of its actions dedicated to industries that have growth potential or the capacity to stimulate growth in the region. One such industry targeted as part of this strategy was the equine industry. The council initiated many of the actions and undertook an industry study that indicated the sector had modest growth opportunities and 'promising compounding benefits'. However, since then, the council changed its priorities and the focus has moved away from the industry.

Source: VAGO, based on information provided by the audited councils.

Both Melton and Southern Grampians link their performance measures to specific actions rather than strategic objectives. For example, Melton's performance measures include holding an annual information session for local businesses and completing specific research tasks. Similarly, Southern Grampians included feasibility assessments and rebranding as performance indicators in its action plan. While these measures help the councils to achieve specific actions, they do not measure what these activities achieved and how the council is performing against overall strategic objectives.

While the information on economic development measures—like economic growth and number of jobs—is readily available to councils through various sources, the audited councils do not include any benchmarks, targets or trend data for these measures. Although all councils included performance measures in their council plan, only two councils had targets. Where there are no targets, reporting cannot identify if the council's performance is in line with expectations. This means councils cannot know if they are on track to achieve their intended outcomes, particularly by the end of the four-year council term.

In an example of better practice, Loddon adopted strategic performance measures and targets that provide high-level indicators of achievement, alongside the output measures in the action plan. These indicators are measurable and linked to accessible data, as shown in Figure 3I.

Having such clear expectations of economic development helps focus the economic development activities of councils. As discussed earlier, a range of internal and external factors influence these measures, and councils may not always achieve the targets they set for themselves. However, setting clear targets means councils can effectively analyse their performance and identify the factors affecting council performance—whether internal or external.

Two of the five councils use a monitoring system to track and report on their progress against actions in the council plan. This system monitors progress to date, which area is responsible, and produces 'traffic light' reporting on progress. However, the system mostly focuses on action items rather than the actual achievement of economic development indicators.

Limited monitoring of outcomes means councils do not have an evidence-based view of the effectiveness of their economic development strategies. It also means they do not understand which of their actions are helping to achieve the desired results.

In 2015, LGV implemented the LGPRF in response to the recommendations of the 2012 VAGO audit Performance Reporting by Local Government.

The economic development indicators in the LGPRF are:

The economic development indicators in the framework are optional, and none of the audited councils report on these to LGV. Three of the four indicators rely on data from the ABR, which councils consider problematic for reporting purposes, as discussed in Section 2.5. The indicators are limited to business support activities, are not outcome-oriented and lack the strategic insight to benchmark council performance across the state.

Even though councils differ in their nature—especially with respect to economic development—access to benchmarked data would enable councils to assess how well placed they are. The councils would then be able to filter information relating to councils of similar size or circumstances to help achieve better outcomes and shared learning.