The government issued a new guideline and established a five-stage process for considering MLPs in early 2015 and declared that MLPs would only succeed if found to be unique, VFM and in the public interest.

This audit considers the WGT project and the new VPC. The government procured both projects, which involve significant public expenditure, through MLPs.

MLPs do not result from standard government investment planning and evaluation processes and are not fully tested in a competitive market. While the MLP process may elicit innovative solutions, governments must take care to ensure they do not overspend in what is a non-competitive process.

Given these risks, DTF and relevant agencies must rigorously assess MLPs against the guideline requirements to give confidence to the government and the community that successful proposals are genuinely unique and provide VFM.

1.2 The MLP assessment and approval process

DTF first issued guidelines for unsolicited proposals, now called MLPs, in February 2014. DTF's amendments to the guidelines later that year addressed our recommendation that proposals of more than $100 million be subject to HVHR requirements.

The current MLP guideline specifies the five-stage assessment and award process outlined in Figure 1A. A proposal must pass each step to proceed to the next.

This assessment process has been in place and broadly consistent since February 2015.

The process does not rule out competitive delivery. However, it allows for situations where an innovative idea or competitive advantage means awarding a contract to a private party without competition.

The guidelines emphasise that, wherever possible, a proposal should incorporate competitive downstream tendering to ensure VFM outcomes.

The government bases its decision on whether procurement should be through exclusive negotiation or a competitive process on advice from DTF and lead agencies.

The MLP guideline includes the government's key criteria for assessing proposals. Proposals must:

Proposals need to satisfy these criteria to proceed under the MLP guideline.

Uniqueness and VFM are critical criteria.

For a proposal to be considered outside of the usual competitive process, it must have 'unique characteristics'. Figure 1B shows how the approach to determining whether a proposal is unique has evolved in iterations of the MLP guideline.

Figure 1B
Evolution of uniqueness criterion in the MLP guideline

Before November 2017, the MLP guideline required proponents to demonstrate uniqueness by the end of Stage 2 to justify further exclusive negotiations with the government.

Under the current MLP guideline, a proposal that may not meet all of the uniqueness characteristics specified in the guideline may still be assessed as unique when considered holistically. If a proposal is not assessed as unique at the end of Stage 2, it will only progress to Stage 3 if an additional uniqueness test has been undertaken and the government has approved progressing with a limited competitive process.

VFM is a key assessment criterion under the MLP process, and therefore critical to a proposal's success. The MLP guideline indicates that VFM is informed by multiple factors, including the proposal's risk and the reasonableness of costs to government to achieve promised benefits.

DTF's guidance on how to determine whether a proposal represents VFM for Victorians has evolved over time, as shown in Figure 1C.

The current MLP guideline considers VFM at each of the first four MLP assessment stages in varying degrees of detail.

The MLP guideline specifies governance and approval arrangements for each stage of the assessment process. Figure 1D outlines the stakeholder responsibilities within these arrangements. 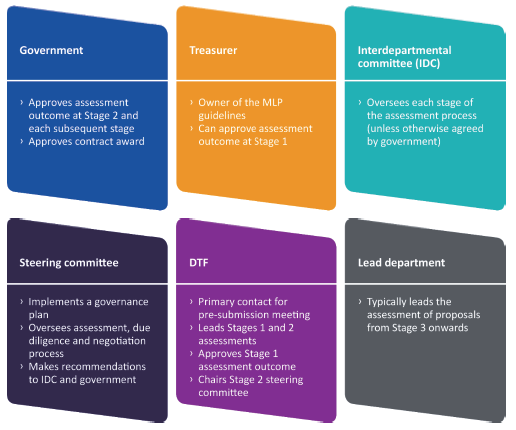 Each version of the MLP guideline includes a government commitment to uphold the highest levels of integrity and transparency in assessing proposals and specifies requirements for probity and disclosure.

The November 2017 MLP guideline enhanced disclosure and probity requirements to ensure the framework upholds this commitment. It:

Figures 1E and 1F outline the disclosure and probity requirements of the MLP assessment process.

Note: *In the Guideline Appendix: Terms and Conditions.
** Within 60 days of contractual or financial close.
Source: VAGO, from DTF's MLP guideline.

This audit examined whether DTF and lead agencies assessed the following MLPs in accordance with the MLP guideline:

The audit focused on the application of the MLP process. This included examining alternative proposals received for both the WGT and VPC.

The audit did not examine delivery of the approved proposals.

Figures 1G and 1H shows the MLP guideline versions that DTF and lead agencies used to assess the three proposals across the four assessment stages.

The Gateway Review and the HVHR processes are project assurance mechanisms overseen by DTF to review and improve project selection, management, delivery and outcomes.

The Gateway Review Process involves short, intensive reviews by a team of reviewers independent from the project at six critical points or 'gates' in the project life cycle. The reviews check that projects are on track before continuing to their next stage and are intended to support project owners.

The government's HVHR project assurance framework was introduced in 2010. DTF performs HVHR reviews for the Treasurer. The HVHR process aims to achieve greater rigour in investment development and oversight, increasing the likelihood of timely project delivery and benefits realisation for Victorians.

A project is classified as HVHR if it is a budget-funded project that is:

The HVHR has linked gateway reviews to key project approval points and mandated that projects costing over $100 million and/or assessed as high risk must be reviewed at all six gates.

1.8 Prior reviews relevant to this audit

In our 2015 audit we found that, in some instances, when DTF applied the HVHR process to unsolicited proposals there was inadequate:

This audit, also published in 2015, found that the business case for the East West Link project did not provide a sound basis for the government's decision to commit to the investment.

1.9 Who this audit examined

This audit examined whether DTF and lead agencies assessed the selected MLPs in accordance with government requirements.

Department of Treasury and Finance

DTF is responsible for the MLP guideline and process, and:

DTF is required to consult with relevant portfolio agencies and IDC members to undertake the strategic assessment of all proposals. This consultation feeds into the recommendations provided to government on whether to pursue the proposal and, if so, how it will be procured.

During Stages 3, 4 and 5, the government-approved lead department, which can also be DTF, undertakes the MLP assessment. When another department or agency leads an assessment, DTF provides support. DTF and relevant departments and agencies brief the MLP IDC throughout the assessment process

The former Department of Economic Development, Jobs, Transport and Resources

DEDJTR (now DoT and DJPR) was represented on the IDC and involved in assessing the MLPs for the WGT project and the development of a unique disease surveillance system.

The government-operated Pig Services Centre at Epsom, near Bendigo, then part of DEDJTR's Agriculture Policy branch (now within DJPR) was involved in assessment of the unique disease surveillance system.

Department of Premier and Cabinet

DPC is represented on the IDC and was part of the steering committees established to oversee the assessment of the WGT project.

DPC also engaged an independent review panel to examine the Stage 2 assessment of the WGT proposal and the business case for the WGT project.

West Gate Tunnel Project is a project office within the Major Transport Infrastructure Authority in DoT. It is responsible for the delivery of the WGT project. It was previously known as the Western Distributor Authority and more recently the West Gate Tunnel Authority.

Victoria Police provided input into the Stages 1 and 2 assessments of the VPC proposal and led negotiations with the proponents from Stage 3 onwards. Victoria Police also developed the Stages 3 and 4 assessment reports on the VPC in consultation with DTF.

1.10 What this audit examined and how

We also assessed whether DTF and lead agencies:

Our original audit scope also included the development of a unique disease surveillance system and production of disease prevention products for Victoria.

The MLP for this was submitted in June 2017 and rejected in June 2018. We did not evaluate this in depth because our initial inquiries indicated there were no significant issues with the MLP process.

We conducted our audit in accordance with the Audit Act 1994 and ASAE 3500 Performance Engagements. We complied with the independence and other relevant ethical requirements relate to the assurance engagements. The cost of this audit was $1 115 000.