A governance framework should have the structures, systems and practices to ensure:

DELWP was slow to establish governance arrangements for the MSA program and changed them several times. This has limited their effectiveness and meant DELWP missed key oversight activities or did not always do them consistently or to expected standards.

DELWP’s arrangements are not adequate to effectively oversee the MSA program’s future delivery, including ensuring risks are effectively managed and progress adequately communicated to key stakeholders.

Delivery of the MSA program requires the involvement and coordination of multiple government departments and agencies. DELWP has overall responsibility for ensuring the state meets its commitments to the Australian Government.

DELWP did not fully establish formal governance arrangements until 2013, three years after the MSA program was endorsed. This means that at its critical startup phase, the MSA program lacked necessary leadership and oversight.

The initial intended governance structure included an IDC, a Project Control Board and a Project Management Group. Figure 4A details their responsibilities. However, this was not in place until several years into the MSA program.

(a) The IDC comprised multi-agency representatives from departments and agencies involved in MSA Program delivery as well as the Departments of Premier and Cabinet and Treasury and Finance.
Source: VAGO, from DELWP documentation.

Issues with leadership and oversight

The government appointed the IDC in mid-2010 to provide whole of government direction and coordination to effectively implement the MSA program.

Given the MSA program’s scale and breath, the IDC was to operate as the peak project governance body. Its terms of reference stated it would meet quarterly, with more regular meetings to deal with key issues during the startup phase. However, the IDC first met in March 2013, three years after it was established. It met again in September 2013, but there is no evidence of it meeting since then.

DELWP established working groups at the start of the MSA program, to provide specialist advice and inform planning and implementation. These included the:

DELWP has disbanded some of the groups as there is no longer a need for them, while others have an ongoing role in MSA program delivery.

Since 2016, DELWP has managed and reported on the MSA program internally, as shown in Figure 4B. 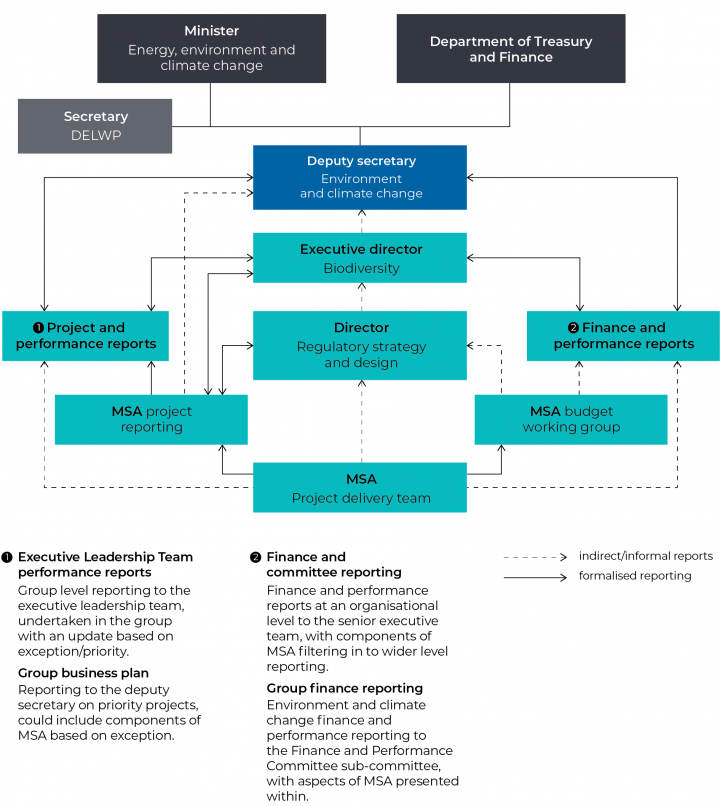 The current MSA program governance is integrated into DELWP’s business reporting processes. External oversight occurs via the Minister and DTF. There is no formal external oversight body such as the IDC.

In 2018, DELWP identified the MSA program as a priority service project. These projects have additional reporting requirements, including:

Our review of monthly reports identified that DELWP:

However, government briefings have focused on the legal and financial risks associated with the MSA program. They did not adequately reflect the impact of delays in acquiring land on meeting commitments to the Australian Government to establish the reserves by 2020.

Risk management is designed to identify, analyse, evaluate, treat and monitor risks that impact a program’s delivery and achievement of its objectives. It covers strategic as well as operational, financial and compliance risks.

The MSA program is to be implemented over the next 40 years and has been significantly impacted by uncertainty due to factors such as sluggish development growth, insufficient revenue and unexpected compensation claims.

Although DELWP has a department-wide risk management framework, it has not adequately managed risk around the MSA program. This includes not identifying all risks, as well as poorly or reactively managing issues as they materialise without appropriate mitigation.

DELWP’s risk management for the MSA program between 2010 and 2013 was poor. A draft risk register dated December 2013 identified 14 MSA program risks. However, DELWP did not finalise this or assess or put in place actions to manage or mitigate these.

Since 2015, DELWP’s MSA program delivery team has been responsible for recording and maintaining the MSA program risk register. DELWP advised us that most risks are managed on a day-to-day basis by the project team and not recorded in the register. As a result, there are no records of the potential risks or issues discussed and considered.

DELWP did not maintain records of potential risks or issues it considered during risk workshops. This would have provided insight into DELWP’s process to identify risks and issues and shown whether its approach has met DELWP’s risk management guidelines.

The corporate risk register only includes one MSA program risk, as seen in Figure 4C. DELWP advised us that it is not common to have multiple operational risks recorded for the same program.

Not meeting the MSA program’s 2020 deadline

In seeking approval for the cost recovery model in 2013, DELWP advised the government about the financial risk associated with the MSA program’s 2020 deadline. The advice indicated that the habitat compensation cost recovery approach would slow the rate of land acquisition and that the state would need to renegotiate the agreed MSA program targets with the Australian Government.

DELWP advised DTF and the Department of Premier and Cabinet that the Australian Government would need to amend the conditions of an approval issued under the EPBC Act to give the states and territories increased powers for approvals and allow them to renegotiate targets. However, this amendment did not occur and DELWP and the Australian Government now consider that an amendment of the approval is not necessary.

Not meeting the 2020 deadline for acquiring WGR land creates risks for its overall value and ecological condition. As previously noted, current monitoring practices cannot fully reveal the impact of this delay on grassland quality. Unacquired grassland may be further degraded by poor land management practices.

The Valuer-General estimated that from 2017 to 2019 increases in land prices led to a tripling of MSA program costs. Figure 4D shows the changes in price estimates.

Increases in land value to February 2019 and delayed land acquisition have contributed to the increase in MSA program costs.

Prior to the recent passing of the MSA Act, there was a significant financial risk that habitat compensation fees—for each habitat area—would not recover the cost of delivering the MSA program’s conservation commitments.

The MSA Act introduces a new environment mitigation levy for each habitat area from 1 July 2020, as shown in Figure 4E.

(a) Scattered Tree is charged per tree lost or removed.
Source: VAGO, from information provided by DELWP.

The environment mitigation levy will be indexed annually to 2024–25 and is intended to achieve full cost recovery. Over the life of the MSA program it is expected that this will provide sufficient revenue to enable the state to meet its commitment to the Australian Government to establish the two reserves.

There is an ongoing risk that slow land development will mean that DELWP will have insufficient revenue to enable timely land acquisition for the MSA program. DELWP considers land acquisition timely if it keeps pace with land cleared for urban development. However, this does not address the issue of ecological degradation of land not yet acquired.

Monitoring, evaluation, reporting, and improvement are integral components of any successful program. These promote accountability, enable the impact, appropriateness, effectiveness and efficiency of a program to be assessed, and help identify and address strengths and weaknesses.

The Monitoring and Reporting Framework

DELWP developed the MSA program’s MRF in May 2015. It is supported by two additional technical documents, both published in June 2015:

These documents provide a framework for how the Victorian Government will provide assurance to the Australian Government that it is meeting the MSA program’s ecological outcomes.

Public reporting was not a commitment of the MSA program. DELWP’s inclusion of public reporting on outputs and outcomes in its framework has improved transparency and accountability. However, this reporting has been ad hoc.

DELWP has developed KPIs to measure the MSA program’s performance. It has grouped these according to outputs and outcomes.

MSA program output KPIs are not adequate to allow for meaningful, transparent reporting. KPIs and targets for the Natural Temperate Grassland and Grassy Eucalypt Woodlands outputs are listed in Figures 4F and 4G.

The lack of output targets associated with the KPIs means there is a limited understanding of what ‘good’ performance looks like.

Deficiencies with the MSA program output KPIs and targets

DELWP’s KPIs and targets for the MSA program outputs do not allow DELWP to analyse performance and determine areas for improvement.

KPIs and targets for the Natural Temperate Grassland and Grassy Eucalypt Woodlands outcomes are listed in Figures 4H and 4I.

Figure 4H
Outcome KPIs and targets for the composition, structure and function of Natural Temperate Grasslands

Figure 4I
Outcome KPIs and targets for the composition, structure and function of Grassy Eucalypt Woodlands

Once DELWP has purchased properties, it completes thorough onsite assessments through flora and fauna inventory reports. These reports detail the quality and quantity of vegetation, the species present on each purchased site and the location of threats.

However, DELWP has not acquired land in a timely manner, which has affected the ability to conduct comprehensive monitoring of its KPIs in the WGR. Five of the seven KPIs are unable to be assessed, with only two assessed as ‘met’.

DELWP does not monitor properties it has not yet acquired—this only occurs once a property is purchased. Delayed acquisition impacts the baseline against which improvement is measured.

When DELWP has acquired three sites with the same baseline state, which reflects the condition of the grassland, it then sets the baseline state for that land parcel. DELWP then continues to assess grassland condition across multiple sample plots for five years.

DELWP committed to publishing annual progress reports on MSA program outputs. Figure 4J shows the reporting schedule and the status of each report.

DELWP has not published progress reports for 2017–18 or 2018–19 as these reports have not been finalised. This has decreased the MSA program’s transparency and accountability, as the broader community has not had an opportunity to scrutinise progress in these years.

DELWP has therefore not complied with its independent monitoring obligations under the MSA program or the MRF.

The MSA Act implements controls to ensure comprehensive independent monitoring of the MSA program. It delegates responsibility for reporting to the Commissioner for Environmental Sustainability.

The Commissioner will conduct strategic audits—and prepare a report—on the implementation of MSA program conservation outcomes every two years. The Commissioner must submit the report to the Minister, who will table it in Parliament. The first report is due by 1 July 2022.

DELWP advised us that the MSA Act regulations will specify the conservation outcomes the Minister must publish.

The inclusion of these provisions in the MSA Act are important and will benefit the MSA program by strengthening accountability and transparency. The Commissioner is intended to act as an independent voice to the Minister, the Australian Government and the community on the state’s progress in implementing the MSA program’s conservation commitments.

The MRF states that the Victorian Government will evaluate the MSA program’s implementation every five years. The Australian Government agreed with the MRF’s commitment for the first evaluation, which was due to occur in 2015.

The evaluation of the MSA program aims to:

DELWP has not yet completed an evaluation of the MSA program delivery.