Unlike previous road safety initiatives in Victoria, the Towards Zero Strategy and the Top 20 Program use continuous lengths of flexible barrier to prevent run off road and head-on serious casualty crashes. This new approach is the largest financial investment and rollout of continuous flexible barriers in the state’s history.

It is important to ensure that TAC and VicRoads have appropriately invested public resources to deliver this major project. It is also important to assess if the newly installed flexible barriers are performing as expected and improving the safety of Victoria’s roads.

1.2 Trauma rates on our roads

Since 1970, more than 114 000 people have died on Australia’s roads. In the last five decades, the number of road deaths per year has significantly decreased, despite significant population growth and increasing numbers of motor vehicle registrations.

Figure 1A shows the changes in Australia’s population, number of road deaths and vehicle registrations between 1970 and 2018. The reduction in road deaths over this period is due to safer roads and vehicles, the introduction of road safety legislation, improved public education and enhanced police enforcement and enforcement technology.

In 2015, the Australian Automobile Association estimated that the annual economic cost of road crashes in Australia was $22.2 billion. Loss of life, health and wellbeing accounted for around 41.7 per cent ($9.28 billion) of the total amount.

Figure 1A
Changes in the number of road deaths, vehicle registrations and Australia’s population between 1970 and 2018 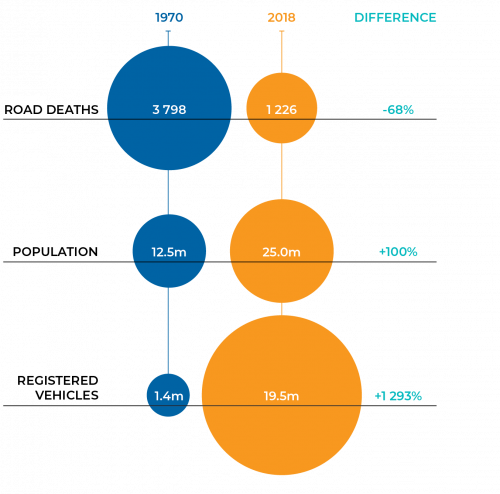 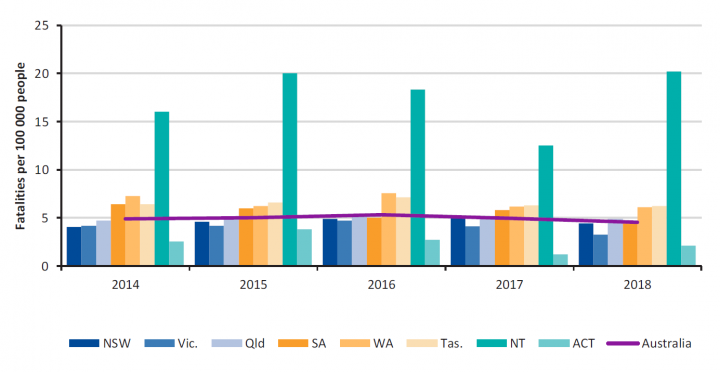 Source: VAGO, based on Bureau of Infrastructure, Transport and Regional Economics data.

Some roads are riskier than others. Factors such as speed limit and location (rural or metropolitan) can make roads more dangerous for users than others. Different types of vehicles also have different risk factors.

As Figure 1C shows, there is a relationship between speed limits and the number of deaths on Victoria’s roads. From 2006 to 2019, more fatal crashes occurred on roads with speed limits of 100 kilometres per hour and more. 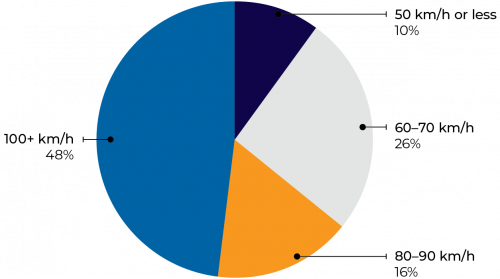 Note: This figure does not account for the number of kilometres driven for each speed category because VicRoads did not have this information.
Source: VAGO, based on VicRoads crash statistics.

Figure 1D compares road deaths in Victoria’s metropolitan and rural areas between 2000 and 2019. 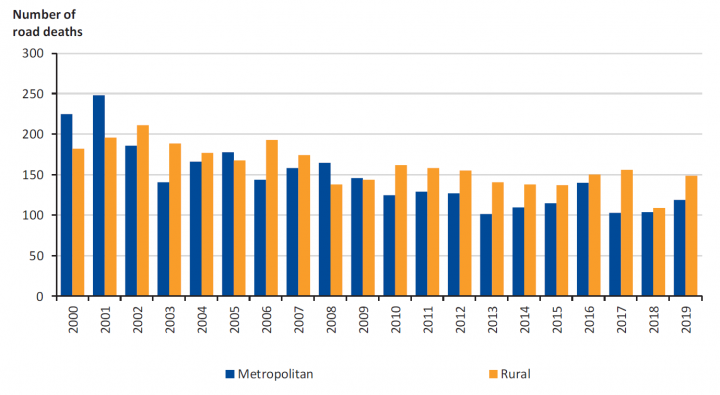 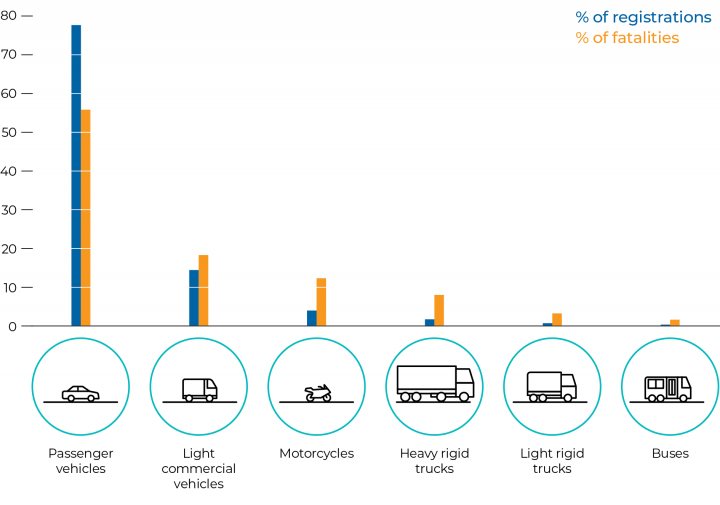 In Victoria, roads are classified by their quality and function (see Appendix B for further information on road classification) or by their type.

Our audit focused on sealed roads that are either divided or undivided. Figure 1F shows an example of a divided and an undivided road.

Figure 1F
Examples of a divided and undivided road

DoT and TAC are responsible for planning and delivering regional road barrier installation projects under the Top 20 Program.

VicRoads, which became part of DoT on 1 July 2019, is responsible for installing and maintaining flexible barriers on Victoria’s roads. VicRoads and TAC make up the joint committee that endorses funding and monitors the Top 20 Program projects.

There are seven VicRoads regions, which are responsible for managing repairs and maintaining roads and barriers in their region. The seven regions are:

TAC funds the cost of medical treatment for people who are injured in road crashes that involve a Victorian-registered vehicle. It also runs campaigns to promote road safety and funds infrastructure projects that aim to reduce road trauma.

TAC is the sole funder of the Top 20 Program and makes up part of the joint committee.

In November 2001, the government launched the Arrive Alive Road Safety Strategy 2002–2007. Under this strategy, VicRoads treated blackspots with safety upgrades, which TAC funded under the SRIP that it announced in May 2003.

In March 2013, the government launched the Road Safety Strategy 2013–2022, which outlines key focus areas such as speed, drink driving and drug driving. As part of this strategy, the government also announced a new funding program—the $1 billion SSRIP.

The Towards Zero Strategy

Launched by the government in May 2016, the Towards Zero Strategy aims to reduce trauma on Victoria’s roads by the end of 2020. Its targets include:

Towards Zero Strategy actions include:

Unlike the previous blackspot approach, the Towards Zero Strategy targets longer lengths of high-risk roads. It also focuses on regional and rural drivers because they are over-represented in crashes and road deaths. The Towards Zero Strategy states that death rates on rural roads are four times higher than on metropolitan roads.

The Safe System Approach is based on three principles: 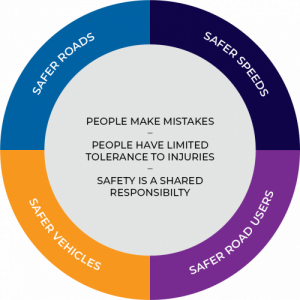 Source: VAGO, based on the Towards Zero Strategy.

Under the Towards Zero Strategy, VicRoads is installing safety infrastructure to stretches of Victoria’s highest-risk roads. Figure 1H shows the location of the 20 road stretches that VicRoads identified as having the highest risk. 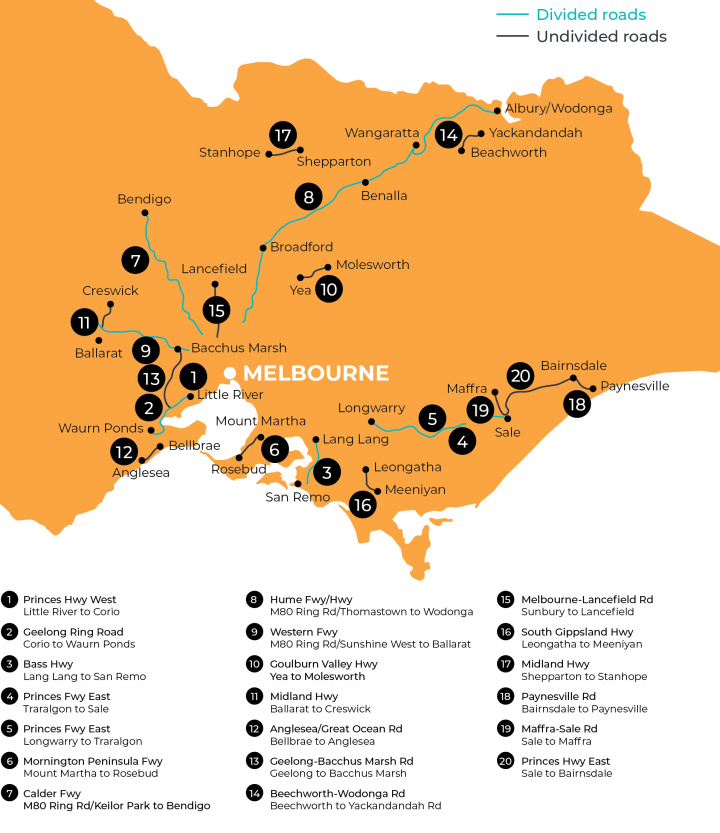 Source: VAGO, based on the Towards Zero Strategy.

Figure 1I outlines the three types of road safety infrastructure that VicRoads is installing to make rural roads safer.

The Top 20 Program is made up of five investment plans and 27 project proposals.

As shown in Figure 1J, the program has been through three different funding approval stages. In September 2014, TAC and VicRoads signed the SSRIP Funding Deed, which sets out their responsibilities and the approval process for the program’s investment plans and project proposals. The SSRIP Funding Deed also established the joint committee. 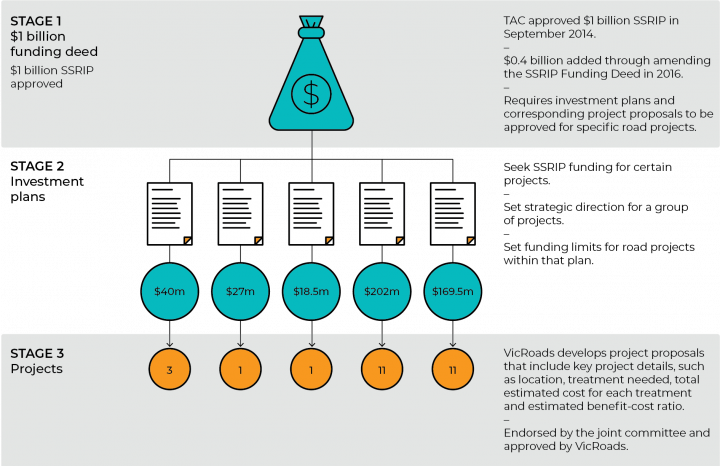 TAC approved the five investment plans that make up the Top 20 Program’s funding, which initially totalled $457 million. In November and December 2018, TAC approved three variations to these plans to provide an additional $100 million in funding.

As of October 2019, TAC and VicRoads have approved a total of $557 million in funding for the Top 20 Program. $527 million of this funding has been formally allocated to road projects. 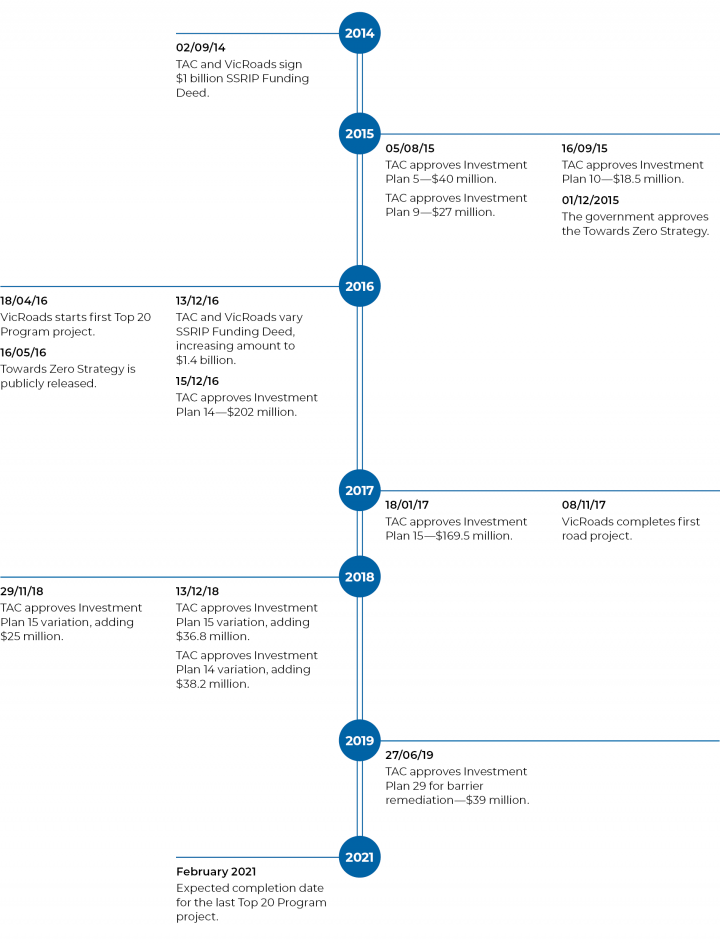 The Road Management Act 2004 outlines the rights and duties of road users and establishes the role, functions and powers of VicRoads as the relevant authority. It also describes how public roads should be constructed, inspected, maintained and repaired.

As shown in Figure 1L, there are three documented standards for road design and safety barriers. Road Design Notes (RDN) have precedence over the other two standards. However, when there is no relevant RDN to guide road and infrastructure design, the VicRoads Supplements to the Austroads Guide to Road Design details the specific requirements that must be met.

Our audit objective was to determine if Victoria’s regional road barriers program is delivering its intended safety outcomes.

Specifically, we examined TAC and VicRoads’ roles in planning, installing, maintaining and monitoring flexible barriers under the Top 20 Program.

We conducted our audit in accordance with the Audit Act 1994 and ASAE 3500 Performance Engagements. We complied with the independence and other relevant ethical requirements related to assurance engagements. The cost of this audit was $632 000.

Unless otherwise indicated, any persons named in this report are not the subject of adverse comment or opinion.