Eight universities and their 51 controlled entities make up the public university sector in Victoria. Collectively, they make a significant contribution to the state and national economy through their principal activities of higher education and research.

The universities provide higher education services to both domestic and international students. Enrolments have grown steadily by around 4 per cent each year since 2012, and there were about 370 000 students enrolled in 2016.

Over the past five years, foreign students have consistently accounted for around 30 per cent of total enrolments. As most foreign students pay full fees, they are a significant source of revenue for most universities.

The sector has progressively increased its international operations in an effort to diversify and broaden its reach to international students. This includes establishing overseas offices and campuses, developing partnerships with foreign higher education providers, and offering distance learning and cloud-based options.

The research conducted by the sector contributes to expanding knowledge and improving efficiency, with broad and far-reaching benefits. Higher Education Research and Development statistics show Victoria had the second highest expenditure—behind New South Wales—on higher education research and development in 2014.

Aside from research and education, universities also engage in a number of other income-generating activities, including providing student accommodation, health and fitness facilities and other services, to supplement and support the experiences of their staff and students.

To fund their operations, the sector relies primarily on student fees and government funding. Figure 1A provides an overview of the sector's operations.

Overview of the university sector 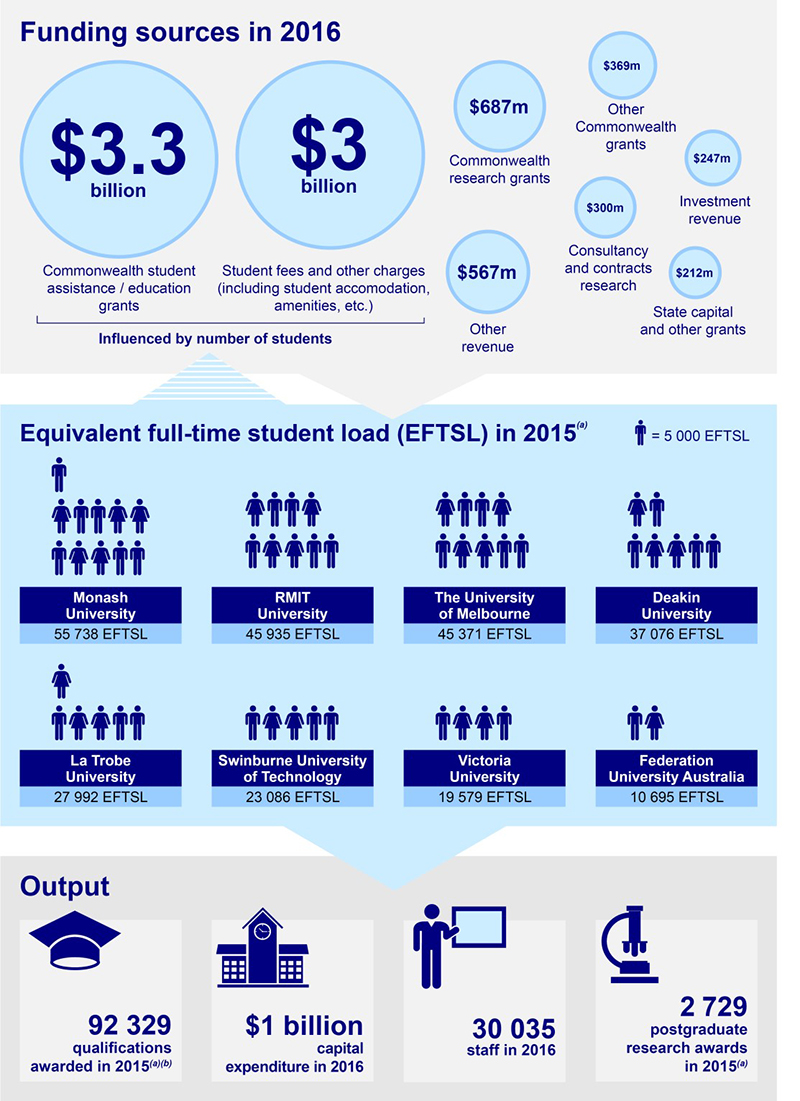 The universities and their controlled entities are subject to a range of accountability and reporting frameworks, with many and varied reporting requirements. As a result, universities' financial reporting is complex.

1.3 What we cover in this report

We identify and report on the key matters arising from our audits, and provide an analysis of the information included in the universities' financial reports.

Figure 1B outlines the structure of this report.

Appendix B provides a list of all 59 entities included in this report, and details the financial audit opinions issued for the year ended 31 December 2016.

We carried out the financial audits of these entities under section 8 of the Audit Act 1994 and Australian Auditing Standards. Each entity pays the cost of its audit.

The cost of preparing this report was $125 000, which is funded by Parliament.