1.1 The importance of successful transitions for children

The importance of children making successful transitions into and between schools is widely acknowledged and the success of a transition is influenced by a broad range of factors, including prior learning and achievement, socio-economic and cultural background, disability and learning difficulties, and gender.

The two key transitions occur at times of significant developmental change. The transition into Prep marks the start of a child's formal full-time education and the move away from play-based learning into a more structured learning environment. Meanwhile, the move from primary to secondary school often occurs around the onset of puberty.

While a transition is generally considered to be a single event—where a child moves between sectors (early childhood education and care to school) or schools (primary to secondary)—the process of transitioning covers a longer period of time, and can be both challenging and transformative. For example, the skills a child learns in kindergarten can influence how quickly and effectively they transition into school.

The actions of the school to support a child in the months and years following their transition can also have a significant impact. It is therefore important not to consider a transition simply as a process of transferring a child from one setting to another, but as a series of interconnected processes taking place over an extended period of time.

One of the key initiatives implemented across all Australian jurisdictions to drive improved transition outcomes for Prep students has been to increase the levels of participation in kindergarten programs. In 2014, around 96 per cent of four-year-old children in Victoria were enrolled in a kindergarten program.

Kindergarten programs play a critical role in a child's learning and development including their social and emotional skills, self-awareness, language, literacy and numeracy skills—all of which are critical to helping children settle quickly and effectively into a school environment. Attending high quality kindergarten programs has been shown to have a positive impact on a child's later school-based outcomes.

In 2014, 74 826 Victorian children moved from early childhood education and care or home-based settings into primary school, with 51 222 of those (68 per cent) starting Prep in a government school.

There has been growing awareness of the importance of 'the middle years'—defined as spanning Year 5 to Year 8—on a child's learning experiences.

The transition from primary school to secondary school occurs during these middle years and involves significant change for a child and their family. While the majority of children make this transition without disruption to their wellbeing or learning, many experience a drop in achievement and engagement with school in the years following this transition.

International research suggests that this negative impact may be cumulative—existing gaps are likely to be widened—and may signal the beginning of later disengagement from secondary school. Australian research also shows that as a child progresses through the middle years of school they report a decrease in psychological health. A quarter of Western Australian children surveyed by Edith Cowan University in a study published in 2014 found the transition from primary to secondary school difficult. 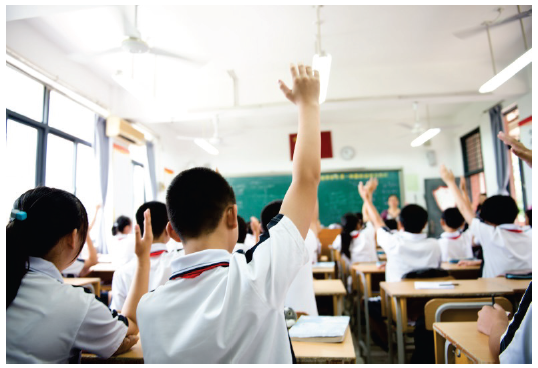 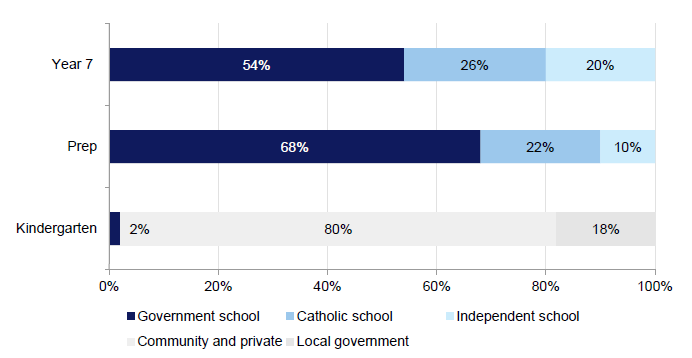 Note: 'Community and private' providers of kindergarten services include both Catholic and independent schools.

In addition to these two key transitions, a large number of school-aged children also experience transitions when they move:

In order to receive Victorian State Government funding, preschools must be licensed to operate a preschool program that meets the criteria for funding eligibility.

1.6.1 Department of Education and Training

DET is the key agency responsible for the delivery of educational outcomes in Victoria, including for early childhood and school education. It provides funding to government schools to cover the cost of providing free instruction in the core curriculum—including infrastructure, staffing and school resources—and separately funds specific programs designed to meet the individual learning needs of children, both prior to and within the school system.

In addition DET's role is to:

Under the Compact, government schools have broad responsibilities related to transitions—including demonstrating sustained improvement in student engagement and wellbeing, and tracking children's data, including any movement to a different setting. In Victoria there are:

Australian and international research suggests that learning experiences in the years prior to starting school—and in the early years of school—are critical to a child's long-term success at school. As a consequence, Australian governments have increased the investment in early childhood education and care significantly over the past decade. Across all state and territory governments, $1.4 billion is spent annually on early childhood education and care. DET reported that its expenditure for the 2013–14 financial year for early childhood education was $367.5 million. This figure includes per capita grants, kindergarten fee subsidies and specialist program funding.

1.7.2 Middle years and students with disabilities

DET provides the delivery of education to children in Victoria by giving funding directly to schools. DET funds government schools through the Student Resource Package. In 2014, the Student Resource Package allocated over $5 billion to schools, comprising student-based funding, school-based funding, and targeted initiatives. The standard funding component for each child in a school is weighted to recognise the different costs associated with different year levels. The level of funding provided for students in Years 7 and 8 who have just transitioned to secondary school was increased to the same level as students in Years 9 to 12, to encourage schools to invest in early intervention.

DET also administers $640 million in funding under the Program for Students with Disabilities for children from Prep through to Year 12. This cohort of children is considered to be at a higher risk of making a poor transition.

The audit focused on the most significant transitions that all children make—into primary school for the first time and into secondary school. It also examined activities undertaken by English language schools and specialist schools. The transitions that children make annually as they progress to the next year level were not considered as part of this audit.

The objective of the audit was to examine how effectively early childhood education and care providers, primary and secondary schools and DET are supporting the transitions of children in the education system. To evaluate this objective, the audit assessed whether:

The audit involved research, document and file review, and interviews with DET staff and stakeholders. The audit also selected a range of schools, taking into account factors such as their region, proximity to other government and non-government schools, socio-economic status, receipt of transition-related funding and performance against transition-related indicators. In total, the audit examined the practices of 30 schools and early childhood education and care providers, as shown in Figure 1B.

Providers or schools visited during the audit

(a) Providers not associated with DET.

1.10 Structure of the report

This report is structured as follows: