High-quality public services are critical to the wellbeing and prosperity of the community. The Victorian public sector comprises approximately 3 388 entities, employs about 286 000 people, and delivers a diverse range of services, such as healthcare, schools and roads. This requires a skilled public service capable of giving comprehensive and impartial advice to government, effectively and efficiently implementing policy, and delivering services. The public sector must operate with absolute integrity to meet the needs of the Victorian community and maintain its trust.

Public sector commissions exist in all Australian jurisdictions, and play an important role in supporting an effective public sector. They provide guidance and set standards in areas such as merit-based employment, professional codes of conduct and good governance practice.

1.1 The public sector commission in Victoria

In Victoria, the public sector commission function was performed by the State Services Authority (SSA) from 2004 until 2014, and by the Victorian Public Sector Commission (VPSC) from 2014 onwards.

SSA was established in 2004, under the Public Administration Act 2004 (the Act). Its role was to:

In July 2012, the creation of the Independent Broad-based Anti-Corruption Commission (IBAC) changed the Victorian integrity landscape and provided an opportunity for government to reconsider the role of SSA. The Department of Premier and Cabinet (DPC) led a review of SSA in 2012, which recommended changes to SSA's governance structure and new requirements for long-term strategic planning. The Act was subsequently amended in 2014, replacing SSA with VPSC.

The Act prescribes VPSC's functions, as shown in Figure 1A. Six of the functions are specific, such as issuing codes of conduct, while others can be fulfilled in various ways.

Note: VPSC is not subject to ministerial direction or control in performing any of the functions listed in section 40.

Source: VAGO, based on the Public Administration Act 2004 .

These functions are substantially the same as those of SSA, with two noteworthy differences:

When SSA transitioned to VPSC, the number of leadership positions was reduced. Figure 1B shows these changes.

Changes in governance in the transition from SSA to VPSC

Note: SSA appointed commissioners as required for short-term projects. VPSC's advisory board is appointed by the Premier and consists of up to seven members who collectively have knowledge, skills and experience in public sector, business, service delivery and regional matters.

Under the Act, VPSC is accountable to the Premier and the advisory board. VPSC's functions under section 40 of the Act are independent and not subject to ministerial direction. Provisions in section 39 of the Act can be subject to direction from the Premier.

The Commissioner is a member of the Victorian Secretaries Board (VSB), along with the secretaries of the seven departments and the Chief Commissioner of Victoria Police. Although not a formal part of VPSC's governance structure, VSB makes requests to VPSC for work, and VPSC considers VSB an important stakeholder in its activities.

Under the Act, the advisory board must provide:

The Secretary of DPC is the chair of the advisory board, and DPC held secretariat responsibility until it transferred this responsibility to VPSC in November 2016.

Since VPSC's establishment, its recurrent budget has remained around $6 million, with supplementary funding of: 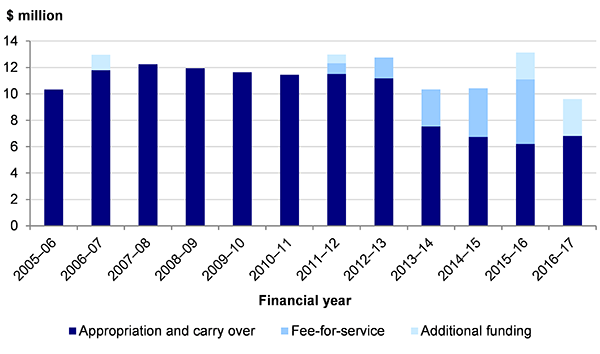 Source: VAGO, based on data from VPSC.

In response to the reduced budget, SSA lowered its costs by reducing staff numbers via voluntary departure packages, and reducing overheads. It also stopped promoting its guidance, and carried forward its previous‑year commitments to avoid a deficit. VPSC has continued these activities.

SSA also responded to the reduced budget by shifting some of its services to a fee‑for‑service model—an approach that VPSC has continued.

SSA already charged fees for several activities, such as its management of the Victorian government careers website and delivering the graduate recruitment scheme for the Victorian public service. From 2014 onwards, VPSC increased fees for these activities to better reflect their total costs. It also shifted its public sector agency review function, previously funded through appropriations, to a fee-for-service model. 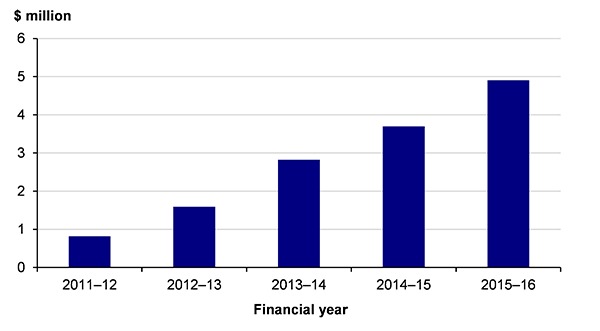 Source: VAGO, based on data from VPSC.

VPSC is a portfolio agency of DPC. DPC is responsible for supporting the Premier of Victoria and the Special Minister of State in promoting good governance, public administration and workforce management, as well as providing advice on the Act. In fulfilling this role, DPC has an interest in the effective operation of VPSC.

From 2016, amendments to the Standing Directions of the Minister for Finance (Standing Directions), derived from the Financial Management Act 1994, have given departments clearer information on how they should conduct relationships with their portfolio agencies.

Under the Standing Directions, DPC is responsible for establishing and maintaining an effective relationship with VPSC, including:

1.3 Why this audit is important

VPSC's statutory objectives focus on strengthening key elements of the Victorian public sector—effectiveness, efficiency, capability and integrity. In this way, effective delivery of VPSC's functions has a significant impact on the way the broader public sector performs its roles.

VPSC has not previously been subject to a performance audit. Given recent integrity failures, this audit will provide timely and important insight into VPSC's impact and effectiveness.

In this audit, we examined whether VPSC is effectively performing its functions. Specifically, we assessed whether:

The audited agencies were VPSC and DPC.

We conducted our audit in accordance with Section 15 of the Audit Act 1994 and Australian Auditing and Assurance Standards. The cost of this audit was $575 000.