Regional Victoria is a significant contributor to Australia’s national and export economy.

Victoria also has large deposits of rutile and zircon mineral sands. All major mining and mineral sands processing operations stopped for these minerals in 2017 but may resume if market conditions become favourable.

When ready for sale, commodities are transported by road or rail to national markets or Victoria’s three main export ports at Geelong, Melbourne and Portland.

These commodities, their freight transport mode, and their role in Victoria’s economy highlight the importance of the projects examined as part of this audit.

For many primary industries, the cost of moving goods to market is a substantial part of overall production costs. Transporting freight over long distances to port is historically cheaper by rail than road, as rail can transport heavier and higher volumes over longer distances.

Investment by government in the road network, as well as the use of larger vehicles, has steadily improved road transport productivity. These trends, when combined with substandard rail network performance and a lack of investment in rolling stock and rail facilities at ports and terminals, have contributed to rail’s decline as an economically advantageous freight mode.

This has led to increasing supply chain costs for regional exporters who now move freight by road, due to an unreliable and inefficient rail network.

Figure 1A shows the value and impact of freight and logistics to Victoria.

Figure 1A
Freight and logistics in Victoria 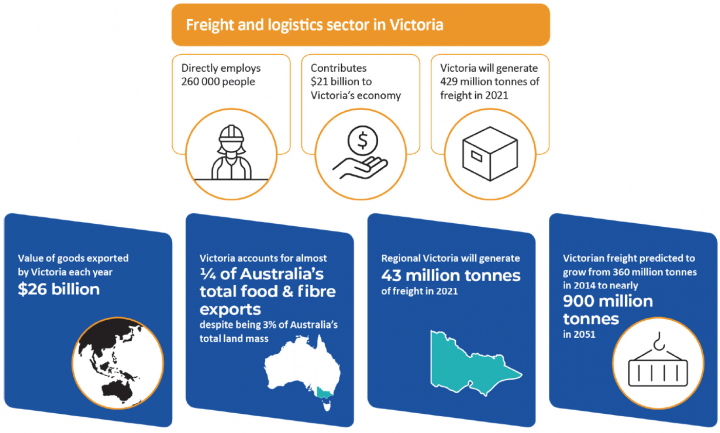 Recognising the importance of the freight sector to Victoria’s economy, the government endorsed the Freight Plan in July 2018.

The Freight Plan identifies a suite of short, medium and long-term initiatives to prepare Victoria’s freight and logistics sector for future growth, challenges and changes.

The Murray Basin is a regional area in North West Victoria that produces and exports grains, mineral sands, fruit, vegetables and wine.

Although mineral sands are not currently transported by rail, agricultural produce is exported on the road and rail network to the ports of Melbourne and Geelong.

In 2014, the Victorian Government announced funding for the MBRP. According to a brochure released by PTV that year, the MBRP would ‘better connect key freight centres in Victoria with our ports and encourage competition and private investment in our rail freight network’.

The government committed to invest up to $220 million towards this project. In April 2016, the Australian Government matched this amount.

The project seeks to deliver rail track and signalling improvements in the Ballarat precinct to maximise benefits for both the MBRP and the BLU, alongside passenger rail. The government allocated the delivery of the project to RPV, with V/Line and DoT seeking freight industry feedback on the project.

Key expected outcomes from the project are to:

By separating freight and passenger rail paths and reducing interfaces with passenger trains and passenger platforms, the project aims to enable faster and more reliable paths through Ballarat for freight trains.

The RRR is a $1.75 billion program to provide faster and more reliable services for every regional passenger train line in Victoria by 2022. Three freight-relevant upgrades within this program are on the Warrnambool, Gippsland and Shepparton lines.

Figure 1B
Freight-relevant works in the RRR program 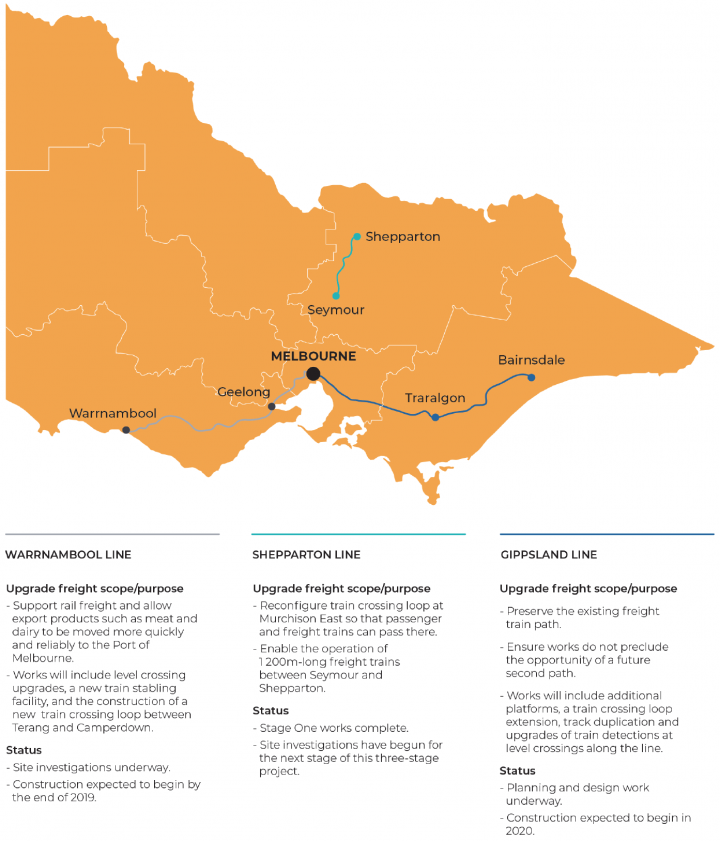 Note: A train path refers to the infrastructure capacity (signalling, level crossings and rail) required to run a train on a given route over a specific time period. Because of logistical issues, such as limited train paths and resource requirements, train operators must pre-book a path for a set time.
Source: VAGO, based on RPV, Regional Rail Revival, 15 October 2019, regionalrailrevival.vic.gov.au.

RPV is delivering the Shepparton Corridor Upgrade (Stages 1 and 2) project as part of the RRR program. It is not included in the RRR funding agreement with the Australian Government and was fully funded by the Victorian Government ($345.9 million) in the 2017–18 and 2018–19 budgets.

In October 2019, DoT began a study to identify infrastructure improvements to maintain and enhance freight capacity on the Shepparton Line. This study, known as the Shepparton Rail Freight Planning Study, is Stage 1 of a $10 million two-stage project funded by the Victorian and Australian governments.

The objectives of the study are to:

The study is still in draft form so we did not assess it as part of this audit.

The BLU project aims to deliver benefits for passengers, with works that enable extra services during peak and off-peak times and improvements to selected stations.

Although we have not examined this upgrade as part of our audit, the Victorian Government expanded the scope of BLU to include the FPRSP, prior to its pause in April 2019, pending the review of the MBRP business case.

In 2014, the state government announced and funded the MBRP. This project intended to deliver freight rail line upgrades to rail infrastructure around the Murray Basin. 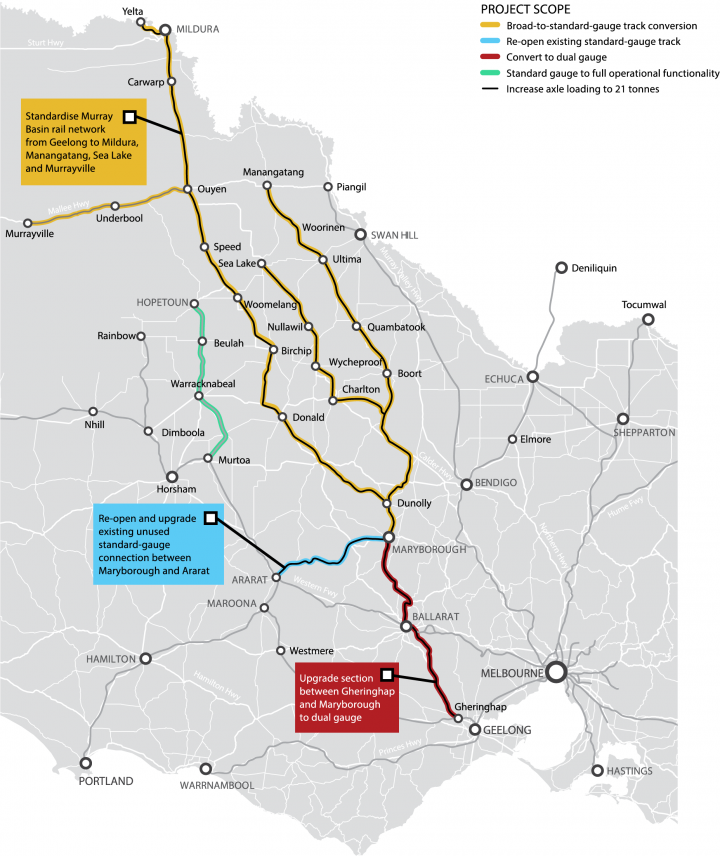 By identifying these corridors for upgrade, PTV reiterated three key issues that the MBRP aimed to address:

Intended benefits and scope of the project

This brochure identified that the project was expected to lead to:

The high-level objectives of the MBRP, according to the business case, are to:

The business case for the MBRP also set three high-level benefits that were expected to accrue from the project, with eight supporting key performance indicators (KPI), as shown in Figure 1D. 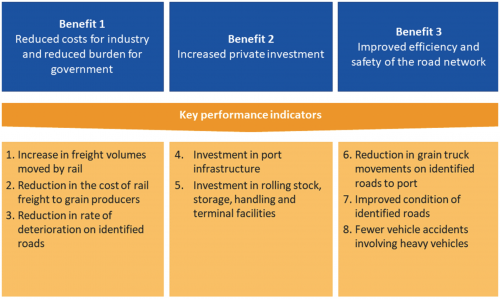 The business case identified four options to deliver these objectives and benefits. The preferred option is shown in Figure 1E.

Key elements of this preferred option include:

Figure 1F shows how the business case set out these works across four stages.

By April 2017, the government identified the need to undertake additional works through Ballarat. As a result of the MBRP and BLU, DoT advised the government that Ballarat would become a railway bottleneck due to ageing infrastructure, increasing transport demands and conflicting requirements between freight and passenger services.

The government subsequently identified works between Maryborough, Ballarat, and Warrenheip as the preferred option to address this issue. It named this option Stage 4b. The government recommended that Stages 2, 3 and 4 (seen in Figure 1F) of the project proceed for delivery while it would undertake a full review of scope and operations for Stage 4b to ensure that there was clear separation of freight from passenger operations. Figure 1G identifies the intended features of Stage 4b. 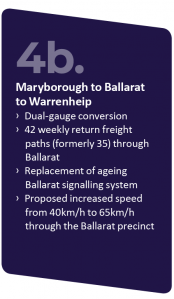 Source: VAGO, based on information from DoT.

In March 2018, the government renamed Stage 4b to Stage 5 of the MBRP. A key benefit expected from this stage was that it would enable standard-gauge freight trains to run from Melbourne or Geelong through Warrenheip to Maryborough. Passenger and freight trains could also run on the dual-gauge track from Ballarat to Maryborough. These works would also allow for the increase in weekly freight paths after the BLU.

In June 2018, the government incorporated Stage 5 into the scope of the BLU project (within the RRR program) and into what would become the FPRSP.

In April 2019, prior to the public announcement that the MBRP would not achieve timing expectations, the government deferred further work on the FPRSP, pending review of the MBRP business case.

Budget for the project

In August 2014, the Victorian Government allocated $220 million for the MBRP (based on a P50 estimate). The Australian Government matched this in April 2016, bringing the total to $440 million.

Timeline for the project

The 2015 business case stated the project would be completed by December 2018.

In December 2016, V/Line ran a procurement process to select a design and construct contractor to deliver Stages 2 to 4 of the MBRP. 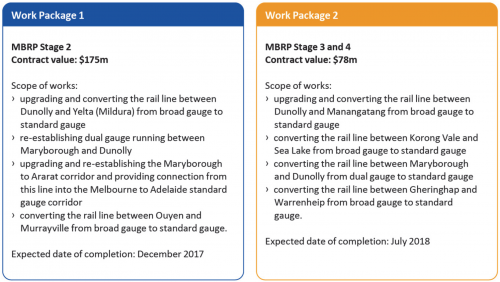 Source: VAGO, based on information from V/Line.

In May 2017, V/Line selected the MMJV as the successful tenderer. The next month, both parties signed the contract agreement for $275 million, which included $22 million in provisional sums.

The MMJV began Work Package 1 in September 2017. One month later, it reported that it could not complete the expected works within the project schedule. To address this, the MMJV submitted a recovery proposal to V/Line, which V/Line agreed to.

Work continued until 22 March 2018, when ONRSR identified a safety breach at one work site. While ONRSR ultimately did not attribute responsibility for the breach, V/Line immediately issued a stop work notice to the MMJV on all works being undertaken. Soon after, V/Line, in consultation with DoT, agreed that the delivery of Stages 3 and 4 would not proceed as originally procured. V/Line and DoT also assessed the option of V/Line directly delivering Stages 3 and 4 as the managing contractor.

In May 2018, the MMJV signed a settlement agreement with V/Line to formally resolve matters arising from the ceased contract works.

Figure 1I shows the agencies responsible for delivering the freight outcomes examined in this audit.

Figure 1I
Agencies examined as part of this audit 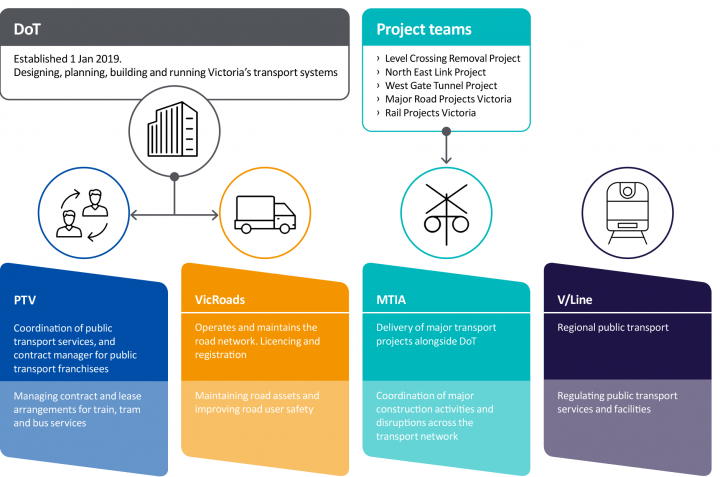 On 1 July 2019, DoT, PTV, and VicRoads merged. DoT is now responsible for planning and operating the transport system in Victoria.

Freight Victoria also sits within DoT. The government established it to coordinate the development of an efficient freight and logistics system. This includes leading the delivery and reporting of the priorities and actions under the Freight Plan.

RPV is a project office within MTIA responsible for the delivery of key rail transport infrastructure projects in Victoria. This role includes planning and site investigations, stakeholder engagement, and construction delivery and project commissioning.

In April 2019, V/Line and RPV jointly developed a proposal for $23 million in urgent maintenance works on the Manangatang line.

In August 2019, DoT confirmed RPV would develop and deliver the RRR.

V/Line is the accredited rail operator and network scheduler for regional rail and coach services and maintains 3 520 kilometres of railway track used by both passenger and rail freight operators in Victoria.

DoT directed V/Line to deliver the works required for Stage 1 of the MBRP. It completed these works in September 2016. V/Line procured a design and construct contractor to undertake Stages 2 to 4 of the project.

In June 2018, the transfer of project delivery roles to RPV limited V/Line’s role to completion of Stage 2 and urgent maintenance on the Manangatang line, which the Minister for Transport Infrastructure approved in July 2019.

1.5 What this audit examined and how

This audit analysed whether regional rail upgrades are improving rural freight outcomes in a timely and cost-efficient way. Specifically, we examined whether:

We conducted this audit in accordance with the Audit Act 1994 and ASAE 3500 Performance Engagements. We complied with the independence and other relevant ethical requirements that relate to assurance engagements. This audit cost $520 000.