When a government invests in a major infrastructure project, it expects benefits for the end user, as well as for the broader economy and society. Typically, a business case lists these expected benefits, and an economic analysis of the project then derives a BCR.

A hierarchy of relative beneficial effects helps governments decide which project will achieve the best outcome in a field of competing demands for capital investment.

In this Part, we examine:

The regional rail upgrades we reviewed for this audit have not yet realised their expected freight-related benefits.

The MBRP has not yet delivered many of the freight-related benefits that the government expected when it funded the project, particularly for track gauge standardisation, line speeds, axle loads and cost savings for exporters.

The three RRR projects with freight-related components that we reviewed showed some consideration of freight outcomes in their planning documentation.

While two of these projects had described freight-specific benefits, none had explicitly linked them to broader policy goals for rail freight. The consequence of this is that the RRR works may not be scoped and designed with appropriate flexibility to facilitate the future expected growth of rail freight on these corridors.

The projects that specified benefits—the MBRP, the Gippsland rail upgrade, and the Shepparton rail upgrade—constructed their benefits framework appropriately.

However, some of the measures defined in the MBRP business case to assess these expected benefits have not been quantified. This means that very small achievements against these measures could be claimed as a benefit.

We assessed the benefits frameworks by using an evaluation framework for project benefits, which is in Appendix C. This assessment model is based on DTF’s requirements and international better practice and we have used it in recent performance audits.

According to the business case, the high-level objectives of the MBRP were to:

The approved MBRP business case stated that the project would deliver the following key intended benefits, supported by eight KPIs:

The interaction between the objectives, expected benefits and solutions is shown in the investment logic map in Figure 4A. 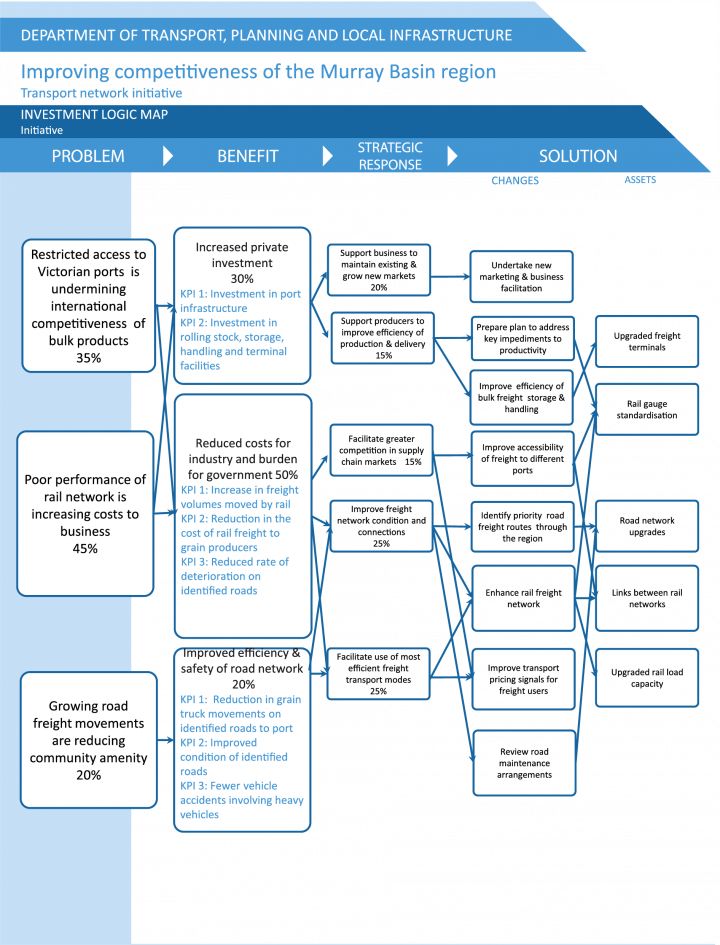 Assessment of the expected benefits

Based on our analysis using the project benefits assessment model, we found that the expected benefits from the MBRP:

In our review of the MBRP business case and benefits management plan, we found that four of the eight identified KPIs set quantitative targets. The remaining four showed targets that were not quantified.

This means that these four KPIs may not be measurable. They used descriptors like ‘reduction’, ‘improved’ or ‘fewer’ without specifying a quantitative target.

These KPIs used the following language:

The use of imprecise descriptors in these KPIs means that any improvement could be recorded as a successful achievement of one or more of the MBRP’s benefits.

DoT needs to rectify this deficiency in KPI measurement when the refreshed business case reconsiders the project benefits framework.

The full expected benefits of the MBRP have not yet been achieved because the main works are paused. While the MBRP has not yet delivered its approved and expected scope, the network is currently available for users, and some other unplanned benefits may exist.

Because the freight-related components of the RRR projects we reviewed have not yet completed their delivery phase, it is too soon to assess if they can achieve the expected benefits.

Achievement of the MBRP’s benefits

The conversion of broad to standard gauge track on the Yelta/Mildura rail line is a direct outcome from the completed components of the project.

Other project benefits that have been delivered to date are:

We saw evidence of increased competition for one freight operator due to the standardisation of the rail gauge. The business case identified this as an expected high-level outcome. However, we have not seen evidence that this benefit has been realised for other freight operators.

The recent urgent maintenance works on the Manangatang line may provide some unplanned benefits, as it is expected to improve the reliability of the freight line and remove restrictive speed limits.

The delay in implementing the approved re-gauging works from Maryborough to Geelong via Ballarat has allowed broad-gauge freight to keep using these corridors.

While some benefits have been achieved to date, the full extent of the MBRP’s future benefits will not be realised until the approved project is completed, or the original scope and benefits are formally redefined and approved by the government.

DoT will need to address a range of challenges so the project can achieve its expected benefits and outcomes:

In some locations, it has reduced rail freight operators’ scheduling and loading windows compared to the previous configuration of the broad gauge network and sidings.

The project scope decisions that were made during the MBRP’s delivery have directly impacted rail sidings:

Broad-gauge rolling stock is in limited supply, and two operators divested part of their grain wagon fleets based on government commitments to introduce standard-gauge.

If exporters need to lease back broad-gauge wagons at a potentially higher cost, it could increase rail haulage costs on the unfinished components of the MBRP. This contradicts the project’s aim to reduce freight costs.

However, rail operators continue to provide freight services using broad-gauge locomotives and a variety of wagons, including for grain, to Piangil, Deniliquin, Tocumwal, Maryvale and Warrnambool.

Broad-gauge passenger services frequently use these corridors, which are expected to remain broad gauge. This illustrates the medium-term viability of broad-gauge rolling stock.

Infrastructure Australia assessed the original MBRP business case as having a positive BCR of 1.7.

At the time of writing, V/Line and DoT have delivered about half of the project’s approved scope. However, it has used 86.7 per cent of the originally approved budget up to Stage 4.

With the next stages of the MBRP main works paused, it will be difficult for the project to generate the expected level of economic and community benefit.

Impact of the MBRP delays on the Victorian Freight Plan

With the project currently paused and uncertainty existing around its future stages, rural freight rail might become less attractive or less economically competitive than road.

This would undermine the broader long-term policy goal of shifting freight from road to rail, where it makes economic sense.

The future benefits from the MBRP were anticipated and incorporated into the Freight Plan’s aims to improve Victoria’s freight network between 2018 and 2050.

At a higher level, the Freight Plan sets out the desired future aims for the Victorian freight system, including road and rail freight.

The Freight Plan states that work completed by an external expert in 2015 found that investing in the regional rail network, such as upgrading axle loads, increasing speeds, modernising network operations, standardising key lines and maintaining the network at its rated standard, would lead to improved running times and productivity for regional rail freight.

According to the Freight Plan, a rail network maintained to enable 21 TAL and 115 kilometres per hour speeds would allow intermodal rail services to the Port of Melbourne to compete with road services. For bulk products, a higher axle load (23 TAL) at a lower speed (40 to 80 kilometres per hour) could also give rail an economic advantage over road.

The Freight Plan heavily focuses on road transport and freight in metropolitan areas. However, it implicitly relies on a functional regional rail freight network because most of the Victorian export freight that originates in regional areas is transported by rail.

As a result, the Freight Plan can only partly achieve its expected outcomes. This is because the MBRP is yet to fully achieve its objective to enable rail to better compete with road for regional freight.

If rail is less equipped to compete with road for regional freight, the consequences could include:

These possible outcomes contradict the policy and strategy aims of the Freight Plan.