This Part summarises the status of the audited programs compared to the original scope, time, cost and benefits parameters approved by government.

The rail upgrades we examined are not yet improving the efficiency, useability or cost-efficiency of the rural freight network to better support rural freight outcomes.

Completion of the MBRP is a year overdue, with over twice the original budget now estimated as necessary to complete the project to its original approved scope. This is due to:

Benefits expected to accrue from later project stages, such as an increase in private investment in new loading facilities at port, are therefore also paused.

The freight-related RRR components we reviewed are still in the procurement stage, so it is too early to assess most aspects of their performance.

The Victorian and Australian governments funded the MBRP to improve rail freight movement. While portions of the project are complete, most rail freight operators have not yet seen desired improvements to line speeds and axle loads. Some operators have seen their freight costs rise because of the inefficiency of the network and the delays in the completion of the MBRP. Further, the project will not achieve these desired improvements without significantly more investment than the government originally approved.

Specifically, the unfinished status of the MBRP has made the situation worse for standard-gauge rail freight on the Yelta to Mildura line when compared to the previous broad-gauge track:

Stage 1 of the MBRP is complete and Stage 2 is substantially complete.

The $440 million project budget is almost fully expended. V/Line recently completed urgent repairs on the Manangatang line costing $23 million. In June 2019, the Minister for Transport Infrastructure put the remaining two stages of the MBRP on hold pending a review of the MBRP business case.

Figure 2A shows the present status of the MBRP.

Figure 2A
Current status of the regional rail upgrade 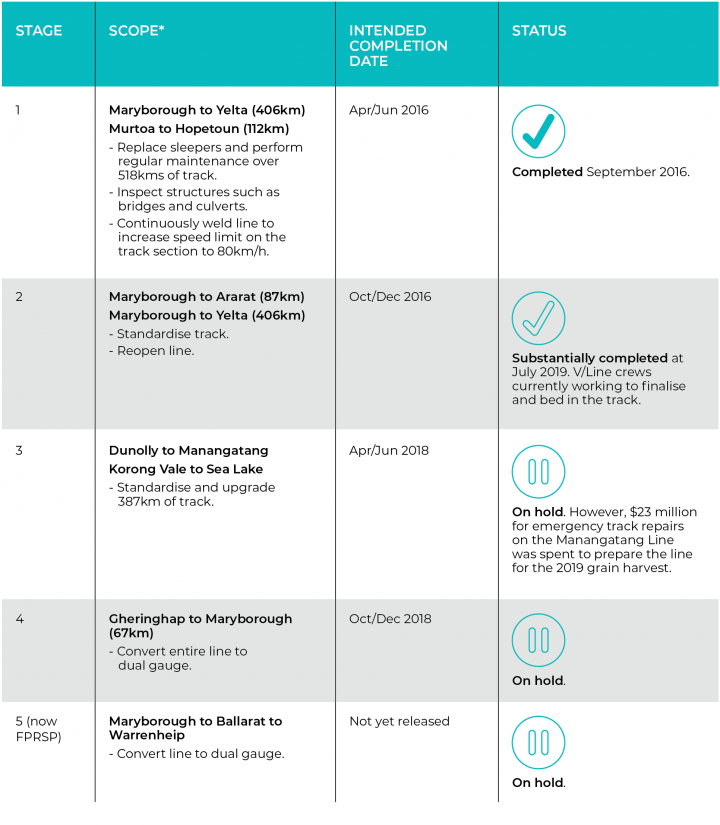 As of 12 June 2019, when the government put the MBRP on hold, funds spent on the project totalled $358.5 million. Figure 2B shows the budget status for the MBRP and FPRSP at December 2019 after V/Line’s urgent maintenance works on the Manangatang line.

Figure 2B
Budget status for the MBRP and FPRSP

Note: *State government and Commonwealth contribution.
Note: **Stage 1–2 and urgent maintenance works on the Manangatang line only.
Source: VAGO, based on information from DoT, V/Line and PTV.

To date, the project has delivered about half of its approved scope but consumed 86.7 per cent of the total originally approved MBRP budget.

Figure 2C
MBRP and FPRSP funding and spend to date 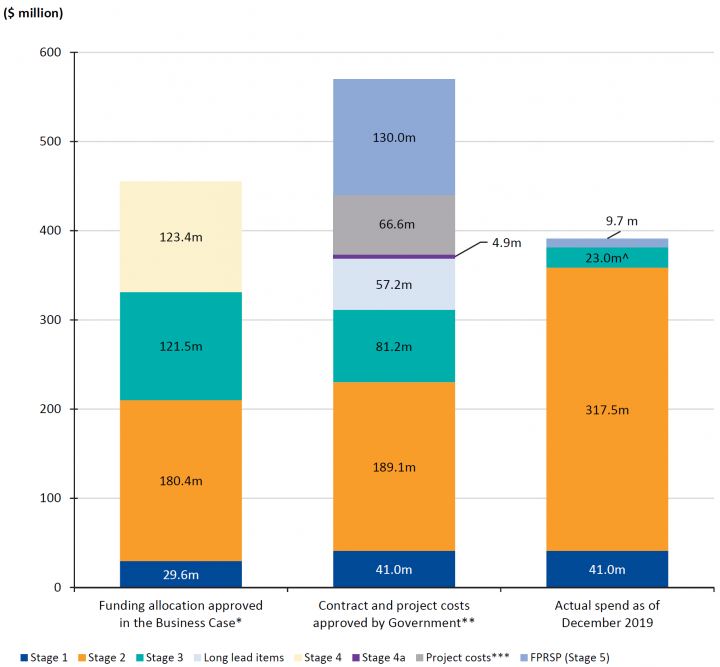 * Total cost estimate based on a P90 estimate of real cost.
** These figures show the actual costs approved by government in June 2017.
*** This covers signalling configuration, contingency, project management, and risk allowance costs.
^ Manangatang line repairs.
Source: VAGO, based on information from DoT, V/Line and PTV.

According to the timelines in the business case, completion of the full MBRP scope is now 15 months late. Due to the pause in the main works, the project is unlikely to be completed in two years’ time, as originally intended in the business case without additional funding.

Recent work by DoT and its advisers to review the original MBRP business case was not finished at the time of this audit. The Australian Government may also require further assessments and consideration of a refreshed business case, such as a review by Infrastructure Australia, if it is to continue as a co-funder.

This could further delay project delivery and expected project benefits.

Figure 2D shows key MBRP events, while Figure 2E shows the variance of expected and achievement dates. Appendix B summarises our findings of the current status of the reviewed regional rail freight upgrades. 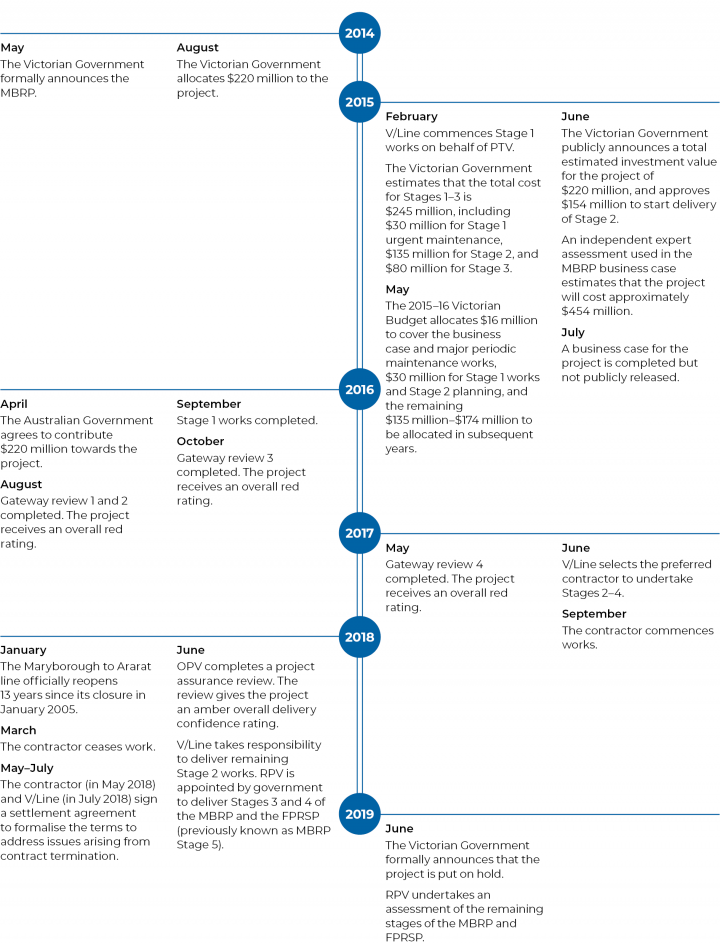 Source: VAGO, based on information from DoT, V/Line, PTV and publicly available information. 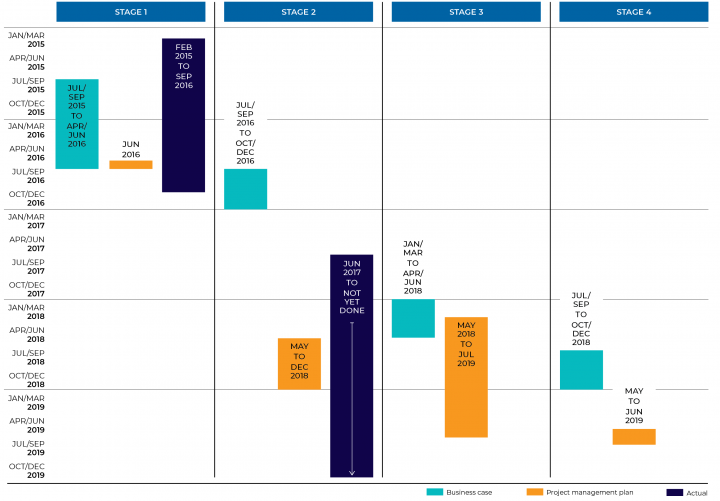 Source: VAGO, based on information from DoT, V/Line and PTV.

Future flexibility for rail freight infrastructure—such as longer passing loops and wagon sidings—was not explicitly considered beyond preserving the current small number of freight train paths on the Gippsland, Shepparton and Warrnambool corridors.

This means that a small increase in the length or number of freight trains will likely require further track adjustments at a later date. DoT advised us that, for the Warrnambool line, a new passing loop is being lengthened specifically for freight needs. However, the length of trains is currently limited by terminal capacity.

While the primary investment focus of the RRR program is on achieving passenger rail improvements, the RRR could also have a positive impact on freight trains as improved track should also allow higher speeds and axle loads.