As Victoria’s population grows, state and local governments need to build infrastructure to maintain Victorians’ standard of living. However, this places financial pressure on state and council budgets.

Development contributions provide governments with the opportunity to acquire additional funds to meet these needs.

In addition to regular revenue sources such as rates or grants, councils have other options, legislated by the Victorian Government, to collect funds from developers to help pay for infrastructure. For example, a council could create a DCP over a specified area. Any developers who build in that area then must pay the council levies on a per lot or per hectare basis.

Councils can also enter into individual legal agreements with developers called VA/s173s, which they can create when necessary.

All councils can use the DCP program or VA/s173s to obtain contributions for infrastructure. Only seven councils are eligible to use ICPs, the newest development contributions tool. The Minister for Planning (the Minister) chose these councils, which comprise six interface councils and one large shire, as listed in Figure 1A.

The state government can also collect funds from developers to provide state infrastructure such as schools, health facilities, bus services and stops, and train stations. In certain growth areas, developers are liable to pay GAIC, which is a flat charge applied on a per hectare basis. To date, legislation only allows seven LGAs to receive GAIC funded projects, which are the same seven councils that can utilise ICPs. In this report, we describe these as GAIC and ICP-eligible (GIE) councils.

Only state agencies may apply for GAIC-funded projects. The state can also use DCPs or ICPs, but this is rare.

Development contributions to either the state or councils can be payments in cash, services, works, or facilities in kind.

Figure 1A
Councils included in the GAIC and ICP programs 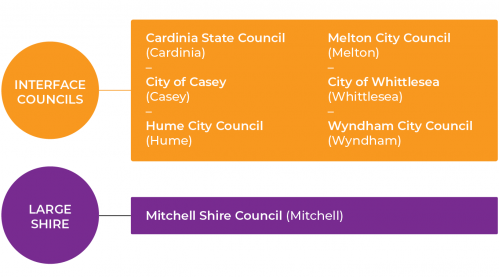 Source: VAGO, based on DELWP information.

The state government set up GAIC in 2010 to help fund infrastructure in seven councils on Melbourne’s expanding fringe.

Developers of land in GAIC-eligible areas are liable to pay the GAIC charge the first time one of four ‘trigger’ events occurs:

Under the Act, a landowner liable to pay GAIC can apply to the Minister to enter into a staged payment arrangement when issuing a statement of compliance for a subdivision or applying for a building permit. If approved, this allows the developer to spread payments over years.

Events that may be exempt from GAIC include:

SRO collects GAIC revenue and DELWP distributes it evenly into two trusts as required by the Act. State agencies can submit an application for GAIC funding to an interdepartmental panel, led by DELWP. The panel chooses projects based on their eligibility under the Act and alignment with the application guidelines, which DELWP releases annually. DELWP manages the annual funding round to distribute funds for state projects, and financially manages the two trusts. Figure 1B outlines the process.

Figure 1B
GAIC collection and distribution

Source: VAGO, based on DELWP information.

In addition to the annual funding round, the government can also use GAIC money to fund eligible projects through the state budget process. To support this, departments need to identify the parts of their budget proposals for which they are seeking GAIC funding and demonstrate eligibility.

VPA is responsible for:

In 1995, Parliament amended the Act to enable planning authorities—including councils—to create DCPs. Under a DCP, a council can obtain funds from developers to support infrastructure delivery by collecting:

Councils usually develop their own DCPs. VPA develops DCPs on behalf of GIE councils and will sometimes develop them for other councils.

In each DCP, the planning authority identifies the:

Planning authorities incorporate the proposed DCPs in an amendment to their planning scheme. They make this public and may receive stakeholder feedback. The final stage is for Planning Panels Victoria to review any unresolved issues with the amendment.

Once approved, all new developments pay a contribution to the council, or perform work in kind to meet their liability. Developers cannot challenge the requirement to pay these contributions.

Of Victoria’s 79 councils, 24 had active DCPs in either 2017–18 or 2018–19. As shown in Figure 1C, the seven GIE councils that the Act declared as growth areas collected 92 per cent of DCP contributions in those two years.

Note: The GIE council category includes six interface councils and one large shire. We excluded GIE councils from other categories.
Note: We excluded one regional city council due to errors in its reporting on DCP outcomes.
Note: Minor variations for total amounts are due to rounding.
Source: VAGO, based on DELWP data.

In 2015, Parliament amended the Act to establish the ICP program. A 2016 ministerial direction made the ICP program available to the seven GIE councils. VPA has developed all eight ICPs so far, the first of which was gazetted in 2017.

Currently, when a ministerial direction brings a new area into the ICP program, it replaces the DCP program. Existing DCPs continue until they are finalised.

The intended advantages of the ICP program over the DCP program are:

The government intends for ICPs to operate in three development settings:

Currently, ICPs only operate in the MGG development setting. The MGG includes seven LGAs on the fringes of Melbourne: Cardinia, Casey, Hume, Melton, Mitchell, Whittlesea and Wyndham. These are the same LGAs included in the GAIC program.

DELWP and VPA have not yet recommended to the Minister:

ICPs were originally designed to collect only money. The government revised legislation in 2018 to include both ‘monetary’ and ‘land’ components.

Figure 1D shows the 2019–20 standard levy rates for MGGs. The ICP program applies the levy to each net developable hectare in a development to calculate the total amount payable.

Note: All amounts in dollars per net developable hectare.
Source: VAGO, based on DELWP information.

The ministerial direction defines the types of projects that each levy can fund. These include, but are not limited to:

An ICP can include a supplementary levy for transport projects if issues such as geographical challenges increase the cost of construction. This commonly applies to bridge construction, for example.

The land component requires developers to contribute land for public infrastructure such as community centres or sports fields. The ICP outlines the land contribution, which the planning authority uses to determine the average amount of land each developer needs to contribute.

Councils and developers can formalise these voluntary agreements through section 173 of the Act. The council records details of the agreement on the land title to ensure future owners are bound by it, and this remains on the title until the developer makes the agreed contribution.

Unlike DCPs and ICPs, voluntary agreements:

There is no public reporting on councils’ use of voluntary agreements, including the collection of revenue and delivery of infrastructure.

DELWP is the legislation and policy owner for development contributions in Victoria.

VPA is a statutory authority with functions under the Act to:

Under the Act, the Minister issues a statement of expectations for VPA outlining the projects that it should work on, including ICPs and DCPs in designated areas.

Councils decide on their development contributions strategy within the parameters set by the state government. 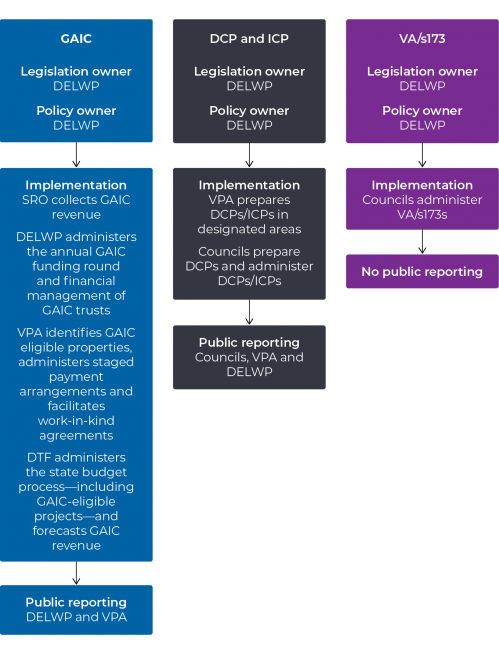 The Act is the enabling legislation for the four audited development contributions tools. The Local Government Act 1989 also provides direction to councils on the provision of services and fiscal management. There are also ministerial directions for the DCP and ICP programs outlining how they operate.

The current directions and guidelines are:

In conducting the audit, we:

We also surveyed Victoria’s 79 councils to understand their experience using development contributions. This included their experience with the DCP program, the support they receive and their expectations for the ICP program. We received responses from 65 councils, which is an 82 per cent response rate. Appendix B details their responses to survey questions that we used to support our audit findings.

We conducted this audit in accordance with the Audit Act 1994 and ASAE 3500
Performance Engagements. We complied with the independence and other
relevant ethical requirements related to assurance engagements. The cost of
this audit was $595 000.