Melbourne has an extensive transport network, which includes rail, roads, cycle paths and footpaths. The challenge is to ensure these components work together as an integrated transport system so that people and goods can move efficiently in and around Melbourne.

Melbourne is facing unprecedented population growth. In the next 30 years, Victoria's population is expected to increase by up to 60 per cent to 9.5 million. As the population grows, travel demands also increase, with public transport use growing at a faster rate than the population. Plan Melbourne 2014 indicates that, by 2050, Melbourne's road and rail network will need to accommodate an additional 10.7 million daily trips, on top of the 14.2 million daily trips recorded in 2014.

Managing increasing demand on road and rail infrastructure is a key task for government, and central to maintaining Melbourne's liveability.

A level crossing—also known as a grade crossing—is an intersection where a railway line crosses a road or path at the same level, as opposed to crossing over or under using a bridge or tunnel.

Governments remove level crossings for a range of reasons, including to facilitate an increase in the frequency of train services, to extend rail lines through developed areas or to improve safety and traffic flow. In the past, some of these removals were part of a larger project—for example, the grade separations in the extension of the Hurstbridge-South Morang lines—however, most were done on an ad hoc basis.

Between 2005 and 2015, there were more than 149 collisions between a train and a vehicle or pedestrian along a rail corridor across metropolitan Melbourne—including the 178 level crossings on the electrified rail network. Of these, 38 resulted in fatalities and 22 in serious injuries. Boom gate closure times and traffic volumes across sites vary significantly and, in some locations, extended boom gate closures can contribute to road traffic congestion.

The number of road level crossings remaining on Melbourne's metropolitan electrified train network is high compared to other Australian cities—see Figure 1A.

(a) Figure for Melbourne is prior to the LXRP.

Note: Canberra, Darwin and Hobart do not have metropolitan train services.

A level crossing removal program managed by VicRoads, Metro Level Crossing Blitz, commenced under the previous government in 2011, with business cases finalised in 2013 and 2014.

The current government announced a level crossing removal program while still in opposition. This program formed part of its Project 10 000 election commitment which identified 40 level crossings for removal. Ten further crossings were added before the election.

These crossings formed part of the 2015–22 LXRP. In 2015, LXRA was established and took over responsibility for managing the program from VicRoads.

There are four main types of road-rail grade separations—see Figure 1B.

Source: VAGO, based on information provided by LXRA. Photographs courtesy of LXRA.

Other options for grade separations include:

The LXRP is one of the Victorian Government's key transport infrastructure projects. Its stated aim is to remove 50 of the most dangerous and congested level crossings by 2022. In May 2015, as part of the Budget, government announced an interim target of 20 removals by 2018.

Since LXRP's announcement, the LXRA has identified two additional level crossings for removal, bringing the total to 52—see Appendix B for a full list. Figure 1C shows the location of these crossings. 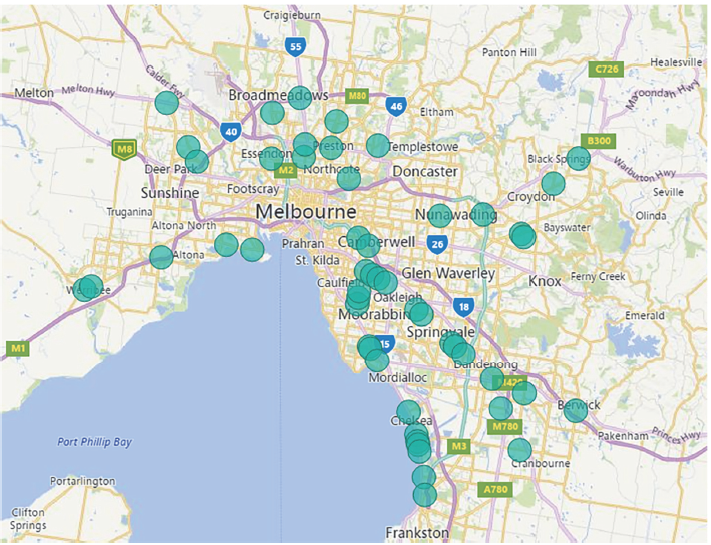 The stated benefits of the LXRP are diverse. They include to deliver significant safety improvements for drivers and pedestrians, improve travel around Melbourne and enable more trains to run more often and on time.

Level crossings will be removed along most Metropolitan train lines. The Cranbourne-Pakenham line will have the most removals, however, these will only amount to 52 per cent of the level crossings on that line—see Figure 1D.

Each package has its own governance arrangements that include:

The project teams are supported by functional teams that include communications and stakeholder relations staff, safety staff, cost controllers and commercial managers.

VicRoads had commenced work on the procurement and construction of 10 level crossing removals prior to the establishment of LXRA. The LXRP incorporated these crossings. The status of those crossings was:

All 52 level crossings are planned to be removed by 2022. While an interim target of removing 20 crossings by 2018 was set in 2015, LXRA is now intending to complete up to 28 by 2018. The 2017–18 State Budget brought forward additional funding to achieve this outcome.

By September 2017, LXRA had removed 10 crossings, with another 16 in the design and construction stage—see Figure 1F. 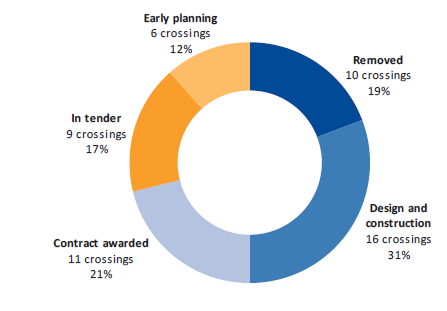 1.5 Integration with other transport projects

Coordination between the LXRP and other major transport projects is important for the development of Melbourne's future transport network.

As government has approved key decisions for the LXRP (including the scope, budget and procurement approach), the governance focus is now on project delivery.

Ultimately, the government is required to approve the LXRP business case, project proposals or works packages, and funding for project delivery.

Figure 1G
Governance for the MTIP 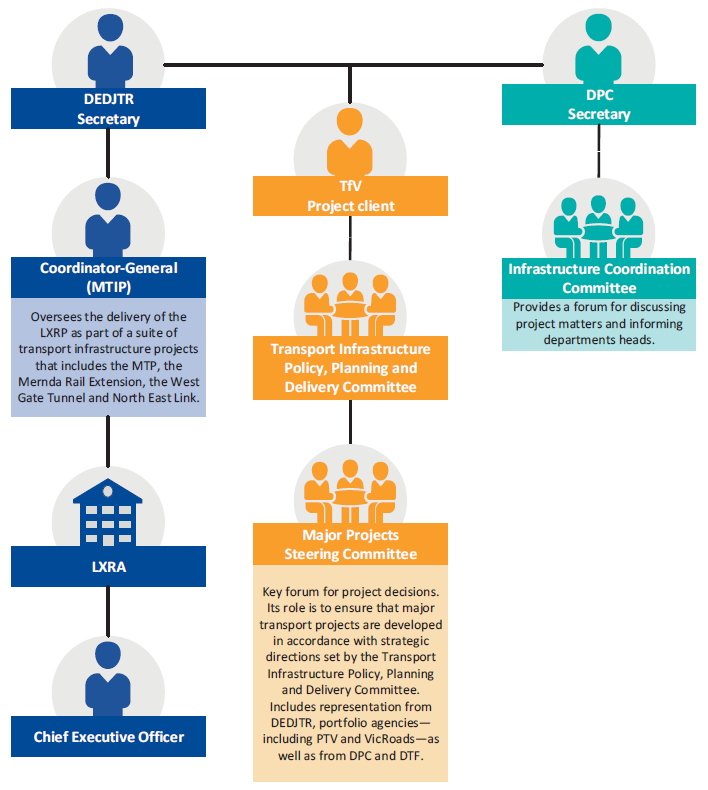 Figure 1H shows the framework for the delivery stage of the LXRP. 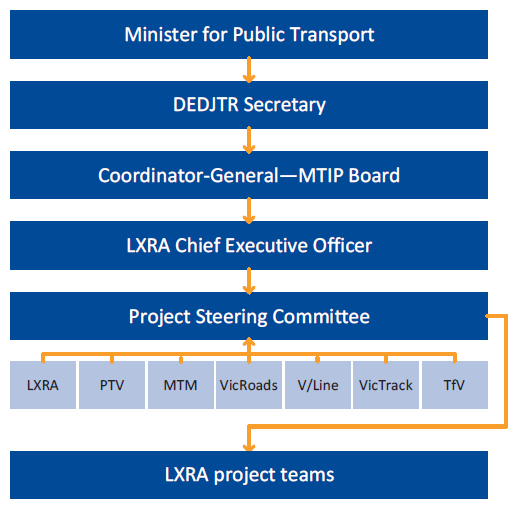 Source: VAGO, based on information provided by TfV.

Governance prior to LXRA

DEDJTR, PTV and VicRoads were accountable for the finalisation of the project development stage, including the business cases and project proposals prior to LXRA. This audit does not focus on the project prior to LXRA's establishment.

The government established LXRA in March 2015 as an administrative office within DEDJTR to manage the delivery of the LXRP, the Mernda Rail Extension and any other project as required. As stated in the LXRP business case, LXRA will oversee the LXRP's implementation and delivery of expected benefits.

DEDJTR is responsible for the integration of transport projects into the overall transport network. The Coordinator-General sits within DEDJTR and has responsibility for overseeing the MTIP.

The Coordinator-General provides strategic advice on progress towards achieving the intended project benefits to the Premier, the Minister for Public Transport and the Minister for Roads and Road Safety, as well as the Secretary of DEDJTR and the Head of TfV. The Coordinator-General also provides assurance regarding the planning, procurement and delivery of the projects.

VicRoads' purpose is to deliver social, economic and environmental benefits to communities throughout Victoria by managing the state's arterial road network and its use as an integral part of the overall transport system.

PTV was established in April 2012. In September 2016, PTV received a ministerial direction to undertake a network integrity and assurance role, to ensure:

Prior to the establishment of TfV, PTV was also responsible for detailed public transport network and service planning.

The Transport Integration Act 2010 requires that all decisions affecting the transport system are made within the same decision-making framework, to support the provision of an integrated and sustainable transport system. The Act:

1.9 Why this audit is important

The LXRP is designed to contribute to longer-term improvements to the road and rail network by easing transport congestion and delivering a safer and more efficient road network. This audit, at this point in time, serves to identify the risks, lessons and opportunities for improvement for future works.

1.10 What this audit examined and how

This audit examined whether the LXRP has been cost-effective in improving, or potentially improving, the safety and efficiency of the state's road and rail network. Our audit focused on DEDJTR's role, LXRA's role in program delivery and benefits monitoring, and TfV's role in providing oversight and strategic focus for the LXRP.

Other agencies in the scope of this audit are PTV, VicRoads and VicTrack.

We conducted this audit in accordance with section 15 of the Audit Act 1994 and the Australian Auditing and Assurance Standards. The cost of the audit was $530 000.

The rest of this report is structured as follows: