Eight universities and their 47 controlled entities make up the Victorian public university sector. Their principal activities are providing higher education and conducting research. Figure 1A illustrates all main income sources, activities and key stakeholders for the sector. 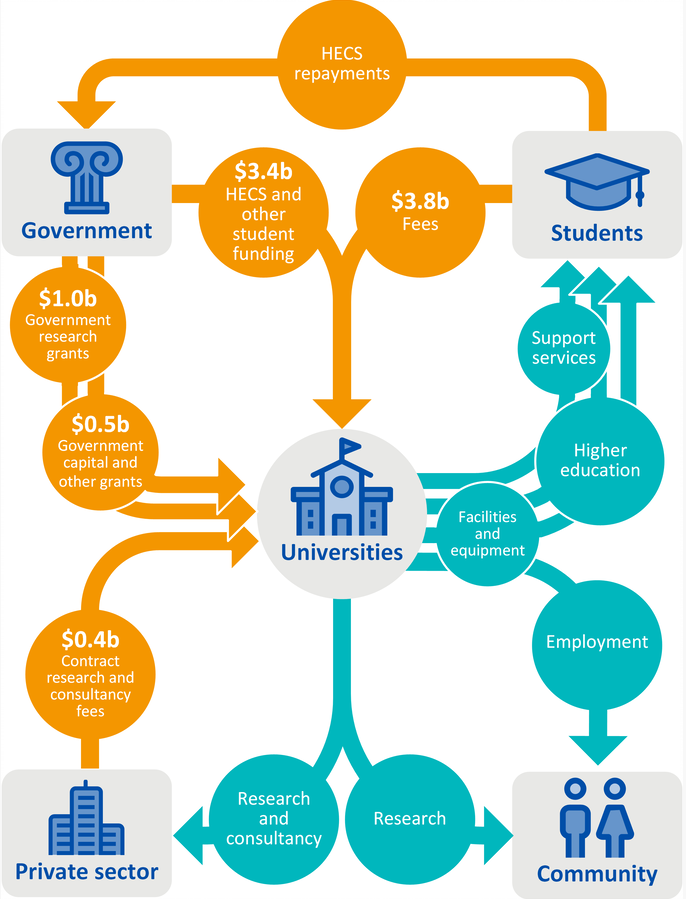 As seen in Figure 1B, most of the sector's income comes from student fees and Commonwealth Government student funding, both of which are driven by student numbers. Publicly and privately funded research is the sector's next largest revenue source. The majority of the sector's assets consist of the property, plant and equipment that it needs to deliver its services. The sector also holds a significant amount of cash and investments. 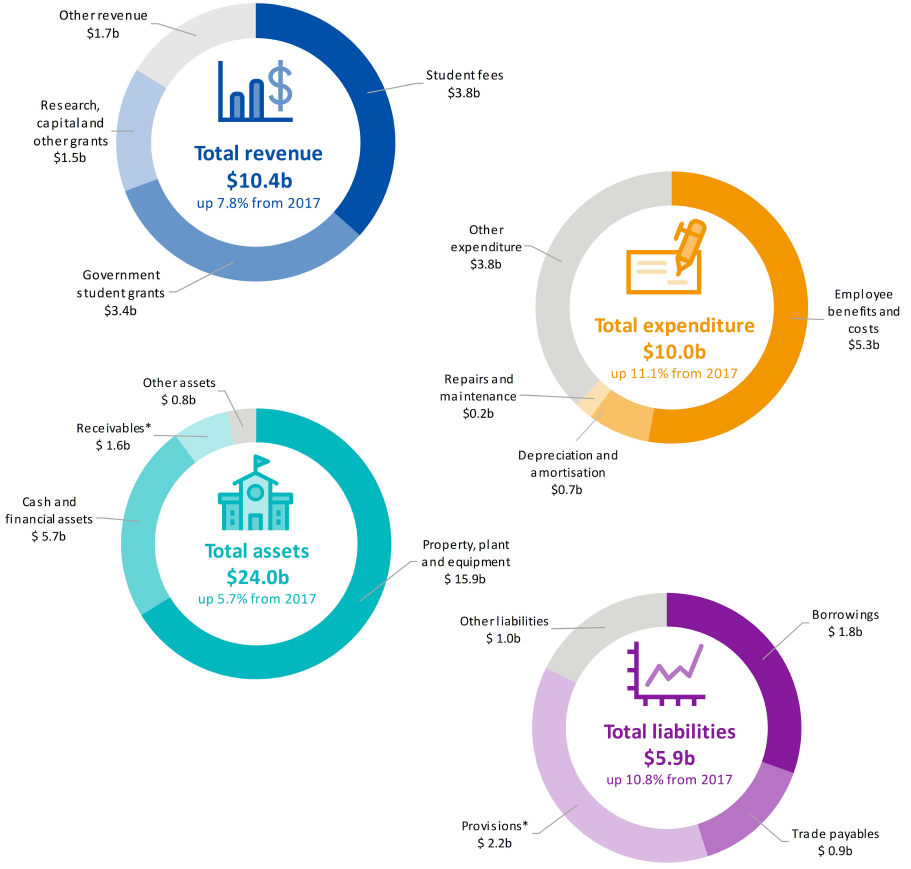 Note: *Provisions include the sector's estimated deferred superannuation contributions of $1.2 billion ($1.1 billion in 2017). An identical amount is included in receivables as the Commonwealth and state governments have agreed to meet this liability.
Note: Figures have been adjusted for the two universities with qualified audit opinions.
Source: VAGO.

Figure 1C shows each university's relative size, based on the number of effective full-time students enrolled, and the number of staff employed. The two largest universities, the University of Melbourne and Monash University, are also members of the Group of 8 (Go8), a company whose members comprise Australia's leading research-focused universities. 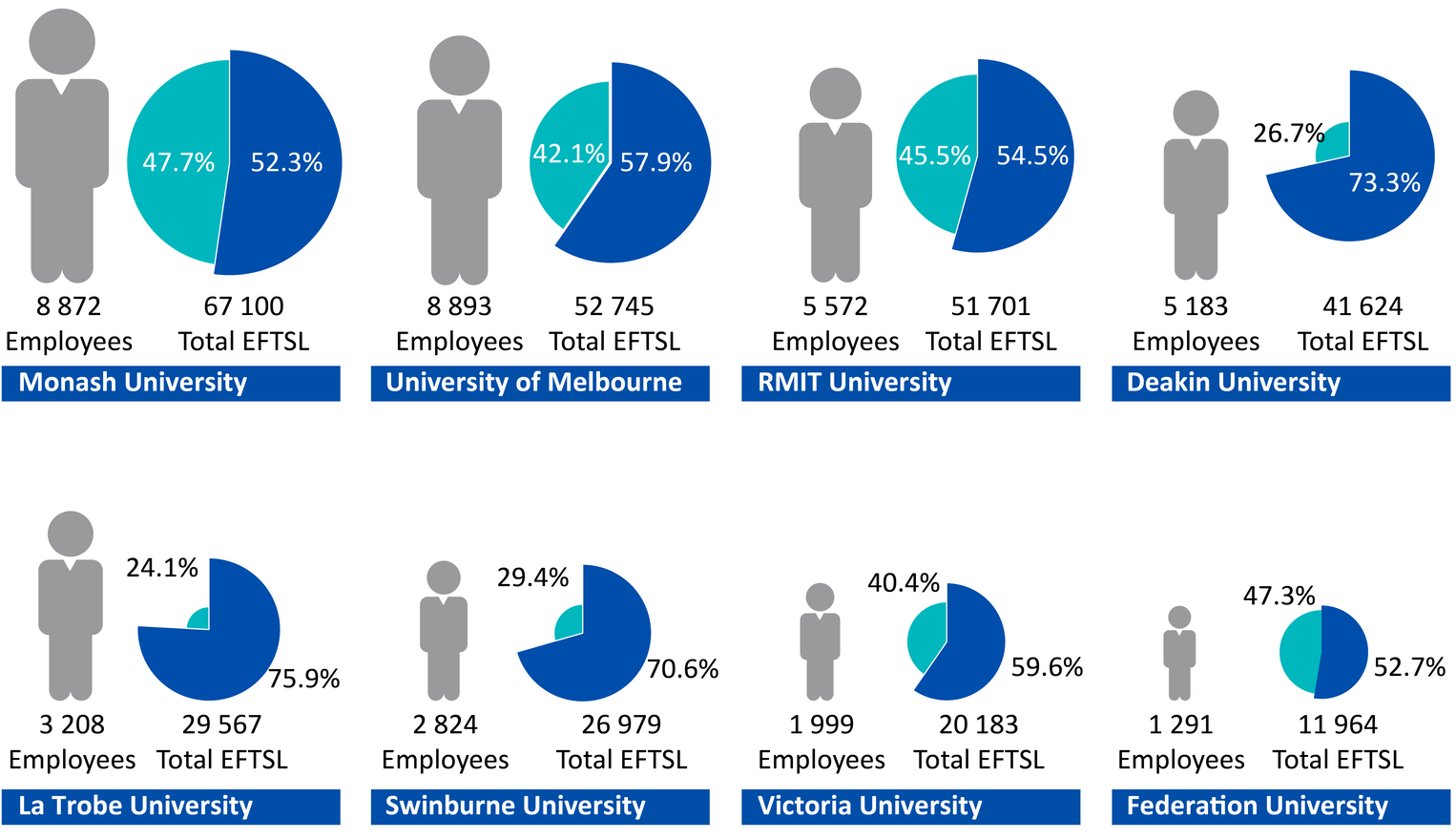 = domestic students.
Note: One equivalent full-time student load (EFTSL) represents the equivalent of a student who is studying on a full-time basis for a year. Overseas EFTSL includes both onshore and offshore student loads.
Source: VAGO.

The universities and their controlled entities are subject to a range of complex accountability and financial reporting frameworks, with many reporting requirements.

Entities controlled by the universities do not automatically fall within the scope of the FMA, but may be required by the respective enabling legislation of their parent university to produce financial reports in a form approved by the minister administering part 7 of the FMA.

We identify and report on the key matters arising from our audits and analyse the information included in the universities' financial reports. Figure 1D outlines the structure of this report.

Appendix B provides a list of all 55 entities included in this report and details the financial audit opinions issued for the year ended 31 December 2018.

We carried out the financial audits of these entities under section 8 of the Audit Act 1994 and Australian Auditing Standards. Each entity pays the cost of its audit.

The cost of preparing this report was $165 000, which is funded by Parliament.

We have consulted with the Department of Education and Training (DET) and the eight public universities in Victoria, and we considered their views when reaching our conclusions. As required by section 16(3) of the Audit Act 1994, we gave a draft copy of this report to those agencies and asked for their submissions or comments. We also provided a copy of the report to the Department of Premier and Cabinet.

The following is a summary of those responses. The full responses are included in Appendix A.

We received four submissions from the sector and a response from DET.

The University of Melbourne and Deakin University do not agree with our interpretation of the nature of their revenue that resulted in our issue of qualified audit opinions on their financial reports, which is discussed further in Part 2. These two universities have also provided their perspectives on their readiness for the implementation of the new revenue accounting standards, which is discussed further in Part 4.

La Trobe University has provided details on the timeliness of their audit, endorsed the use of the adjusted liquidity ratio and commented on their transition to the new accounting standards.