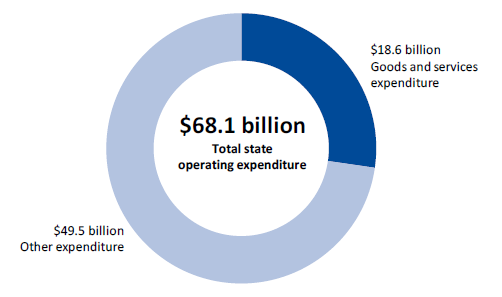 Source: VAGO, based on the Victorian Government's 2016–17 Annual Financial Report of the State of Victoria.

In 2016–17 these departments accounted for $3.3 billion (17.7 per cent) of the total VPS goods and services expenditure.

Given this level of expenditure, the public sector has many opportunities to use its combined demand for common-use goods and services to achieve better value for money. This can be achieved through SPCs, which aim to:

Various legislation governs the VPS procurement framework, described in Figure 1B, and the responsibility for policy advice, tools and training rests with several entities.

Source: VAGO, based on information provided by DTF.

In 1995 VGPB was established under the FMA to:

In February 2017 the government gave approval in principle to draft a Bill to amend the FMA and other legislation. The Financial Management and Constitution Acts Amendment Bill 2017 was introduced into Parliament in November 2017 and intends to update VGPB powers, functions and responsibilities.

VGPB's vision is to provide leadership in government procurement of goods and services, in order to deliver value-for-money outcomes for Victoria. Figure 1C depicts VGPB's strategic priorities for 2016–21. 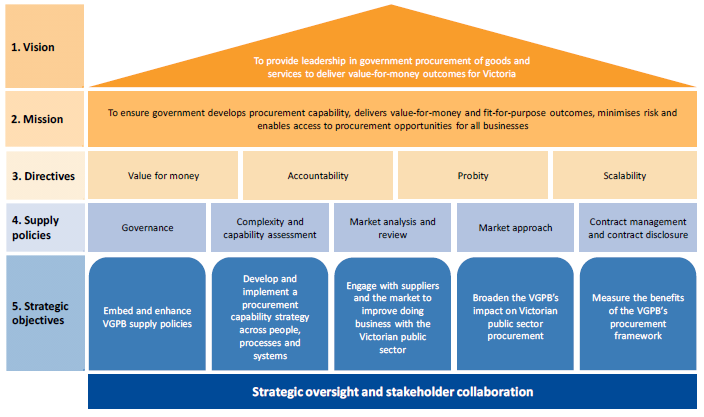 The five-year strategic plan incorporates a priority for multi-organisation purchasing, which includes SPCs and other procurement models.

VGPB policies relate to the procurement of goods and services only, and apply to the following mandated VPS entities:

Appendix B shows the entities bound by VGPB policies.

VGPB policy does not apply to non-mandated public sector entities, local government, the procurement of building and construction works and services, or to health-related goods, services and equipment, as shown in Figure 1D.

Figure 1D
VGPB's sphere of influence across the public sector 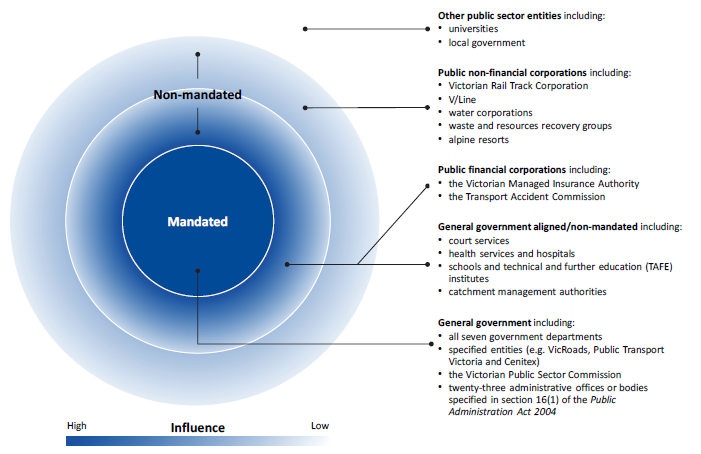 Source: VAGO , based on information provided by DTF.

VGPB works to improve procurement practices for the broader VPS and publishes accessible better practice guidance for all entities regardless of whether they are mandated to comply with VGPB policies or not. VGPB also works with non-mandated entities that want to bring their goods and services spend within the VGPB scope.

VGPB is developing a program to broaden the number of mandated public sector bodies and specified entities that it covers.

VGPB reports to the Minister for Finance, with DTF providing secretariat and other support. The secretariat is also the conduit for communications between VGPB and departments through procurement forums, the dissemination of relevant procurement information on VGPB's website, and by email to the network of procurement personnel across government.

VGPB receives no direct funding and is instead resourced through DTF's allocation to the secretariat.

In April 2018 the Minister for Finance approved a VGPB request to change its oversight process to a more pro-active, engagement model. This approval recognised the increased procurement capability and governance processes of each department and stakeholder feedback from chief procurement officers.

The changes to VGPB oversight role are intended to drive delivery of the government's procurement reforms and to implement the recommendations of a procurement review undertaken by DPC in conjunction with DTF in December 2017 .

A lead agency is responsible for establishing and managing each SPC. The VGPB Market analysis and review policy specifies that an entity that seeks to establish an SPC must:

Once the lead agency obtains ministerial approval, it must again notify VGPB.

Figure 1E shows the lead agencies for the 34 SPCs. 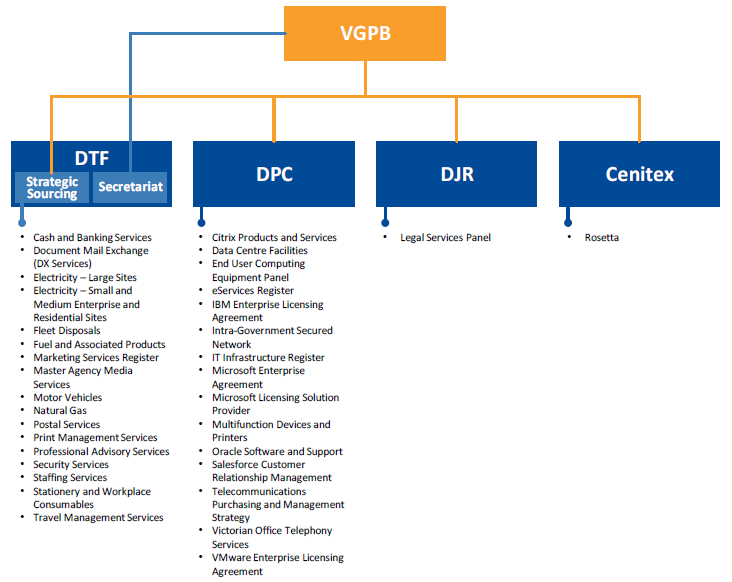 The value of SPCs is significant and growing. Figure 1F shows that reported spend under SPCs increased from $1.06 billion in 2014–15 to approximately $1.47 billion in 2016–17. This is an increase of 38.7 per cent and accounts for around 8 per cent of total public sector expenditure on goods and service in 2016–17. 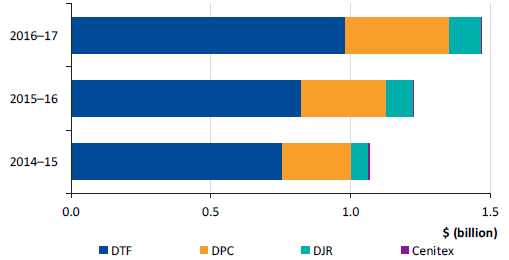 Source: VAGO, based on data provided by DTF, DPC, DJR and Cenitex.

SPCs are either mandatory or non-mandatory—based on an assessment by the lead agency—for entities bound by VGPB policies. Unless the lead agency grants a formal exemption, these entities must purchase from mandatory SPCs.

Statutory authorities, local councils, organisations that government partly funds, and charitable or not-for-profit organisations can use SPCs voluntarily, subject to approval from lead agencies. Where the lead agency grants access to a non‑mandated entity, this is for the duration of the SPC—generally, three years with provisions for two one-year extensions.

(a) DTF estimated spend, not actual spend reported by suppliers.
(b) Spend for this SPC is through the Microsoft Enterprise Agreement.
(c) Spend is not captured by DPC.
Source: VAGO, based on data provided by DTF, DPC, DJR and Cenitex.

Appendix C outlines the scope of each SPC arrangement.

SPCs range from relatively stable goods and services, such as stationery and gas, to rapidly changing commodities, such as telecommunications and personal computers. The different characteristics of these goods and services affect the type of purchasing arrangements needed for each SPC, and influence the monitoring required.

Once the relevant minister approves the business case, the market is engaged and the lead agency executes the SPC and sets out the terms and conditions. The lead agency then develops a Category Management Plan (CMP) to monitor performance and drive continuous improvement.

Figure 1H
Process for developing and managing an SPC

A lead agency should define the expected financial and non-financial benefits of an SPC so that progress against these can be monitored and managed throughout the life of the contract. This includes reviewing the benefits for continued relevance and achievability over time.

Figure 1I outlines a framework used to plan, capture and realise benefits. 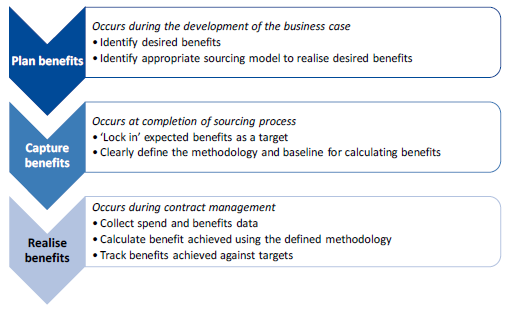 Benefits tracking is critical to a lead agency's ability to demonstrate an SPC's performance. A benefits management framework supports the achievement of the expected outcomes identified in the business case and the benefits finally secured on contract award.

Financial benefits are based on a question—if the SPC did not exist, would the service or goods cost more and, if so, by how much? The answer will be the financial benefit delivered by the SPC. Examples of financial benefits include cost savings through reduced pricing, increased discounts and more favourable payment terms.

DTF and DPC guidance makes SPC lead responsible for delivering the expected benefits or explaining variances when benefits do not meet expectations.

Benefits and risks of SPC arrangements

Figure 1J summarises the potential benefits and risks of SPC arrangements for government entities and suppliers.

Source: VAGO, adapted from the Australian National Audit Office, May 2012, Establishment and Use of Procurement Panels.

SPCs are either sole or multiple supplier arrangements, including panels or pre‑approved registers. Panels can be open or closed. Open panels can accept new suppliers during the term of the contract, closed panels cannot. Figure 1K outlines the different SPC sourcing arrangements.

The audit made the following findings:

This May 2012 audit examined how well DTF oversaw, and user departments managed, SPCs, including their understanding and management of contract leakage. The audit examined the Travel Management Services and the Stationery and Workplace Consumables SPCs.

The audit recommended that:

DTF noted in its response to the report that there were opportunities to work with public sector agencies to review the extent of contract leakage.

During 2014–15, VGPB reviewed its supply policies in response to the government's election commitments and broader operational feedback. The review identified a need for VGPB to adopt a stronger role in establishing, reporting and overseeing SPCs, which DTF oversaw prior to 1 July 2016.

It is timely to assess the extent to which SPCs provide value for money and optimise other procurement benefits, given the total value of Victorian Government agency expenditure on goods and services, including under SPCs, and the relatively recent change in SPC oversight arrangements (see Section 1.3).

1.7 What this audit examined and how

Our objective was to assess whether state government agencies are realising benefits in procurement by using SPCs. We examined whether:

We included eight agencies in the scope of our audit:

We also examined VGPB in its oversight role of state supply policies.

We examined a selection of SPCs based on factors such as strategic importance, spend and stage of contract lifecycle to assess the appropriateness of strategies, including governance, rules of use and reporting requirements. The scope of the audit included the collection of expenditure data from the seven departments' finance systems for the period 1 July 2014 to 30 June 2017.

Given the significant task of obtaining and analysing procurement data, we could not extend analysis to include the 2017–18 financial year.

We conducted our audit in accordance with section 15 of the Audit Act 1994 and the Australian Auditing and Assurance Standards. The cost of this audit was $725 000.