Tracking and reporting SPC benefits is a key part of measuring the performance of an SPC. Lead agencies should be able to show whether SPCs are delivering the expected benefits.

This part examines whether effective arrangements are in place to monitor and evaluate the achievement of expected savings and benefits from SPCs.

Lead agencies report that SPCs deliver significant financial benefits. However, without individual targets for each SPC to measure these reported benefits against, it is difficult to determine if they represent value for money.

For some SPCs managed by DPC, we disagree with the methodology used to calculate these benefits and we believe the calculation has resulted in the overstatement of benefits.

For seven SPCs, lead agencies did not report any financial or non-financial benefits.The lead agencies are unable to show that these SPCs deliver a benefit to the state.

Tracking and reporting SPC benefits is the key way lead agencies show the performance of an SPC and the impact of contract management activities.

DTF is the only lead agency that publicly reports on the performance of SPCs against a target.DTF is required to meet a financial benefit performance target specified in the State Budget papers—'Benefits delivered as a percentage of expenditure by mandated agencies under DTF managed SPCs'.

Figure 4A
Reported financial benefits delivered as a percentage of expenditure by mandated agencies on DTF-managed SPCs, 2013–14 to 2016–17

DTF reported that it exceeded the target each year. DTF advised that the 5 per cent target was derived in 2013 from past performance data. However, DTF has not documented the basis for the target and it is unclear whether this is a reasonable measure against which to judge performance. There is also no documentation that outlines how each of DTF's 17 SPCs should contribute to the target. Further, the target has not changed over four years, despite changes to market environments and SPCs across this period.

DPC and Cenitex do not have overall performance targets to meet for their SPCs, which makes it difficult to assess reported benefits and track performance. DJR has a target but only manages one SPC so is discussed in the next section.

Measuring and monitoring benefits against pre-determined targets enables lead agencies to determine if SPCs are performing as expected. Following the sourcing process, the expected benefits of an SPC should be 'locked in' as documented targets. Lead agencies should then report against these targets to demonstrate that SPCs are achieving expected value for money.

The Legal Services Panel is the only SPC with a 'locked-in' target against which the lead agency, DJR, can track financial benefits. DJR's target reflects the discount in hourly rate that the SPC hopes to achieve compared to the market. DJR undertakes an annual benchmark activity to measure whether SPC rates have achieved this. Since the Legal Services Panel's establishment in March 2016, DJR has consistently exceeded this target. Given this is the only SPC that DJR manages, it does not report publicly against this target to ensure the financial benefit achieved remains confidential.

Lead agencies report the achievement of financial benefits for 26 of the 34 SPCs. Figure 4B shows all reported SPC spend and benefits for 2012–13 to 2016–17. 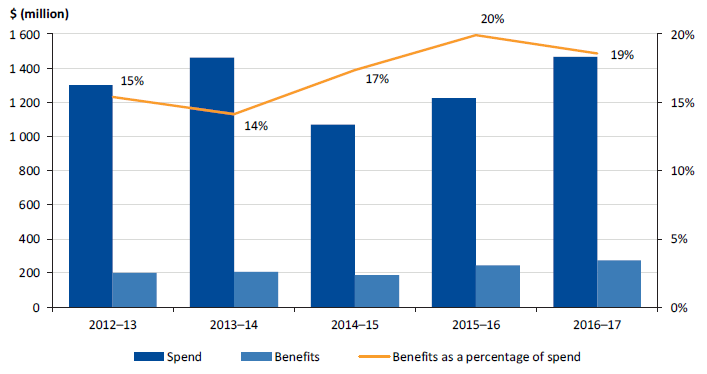 The reported financial benefits in 2016–17, as a percentage of spend, varied between users and ranged from 9.5 per cent at DPC to 34.2 per cent at DET, as Figure 4C shows. This variation can be due the nature of goods and services purchased by entities and the different methodologies used to calculate benefits for each SPC.

Figure 4C
Reported financial benefit as a percentage of spend by user entity, 2016–17 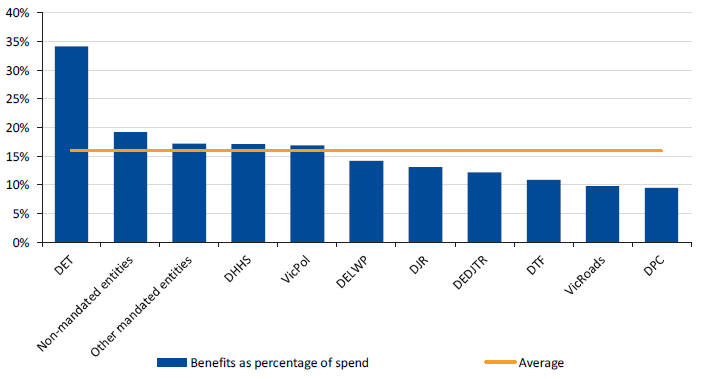 Without targets we were unable to determine whether the reported financial benefits for the SPCs managed by DTF, DPC and Cenitex were appropriate. These SPCs exist in very different market environments and are in place for very different goods and services. For this reason, it is hard to assess the reported financial benefits for each SPC without an associated target.

Figure 4D
Reported financial benefit as a percentage of spend by SPC, 2016–17 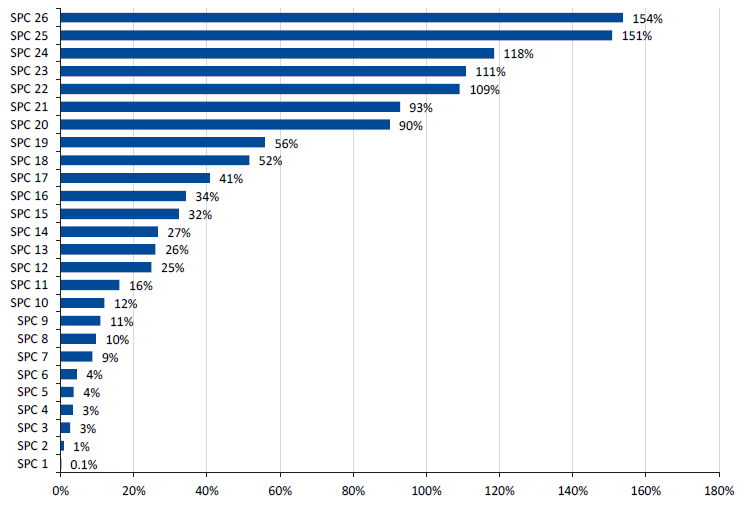 Some SPCs—such as Stationery and Workplace Consumables , and Travel Management Services —may report small financial benefits in relation to spend. However, this may be a good result if the objective was to contain procurement costs rather than achieve large savings, given they have been previously market tested. Without a target we are unable to make this judgement.

SPCs with no financial benefits

In some cases, it can be difficult to calculate the full financial benefit of an SPC compared to if the SPC did not exist. For example, for an engagement of consultancy services under the PAS SPC, no means is available to accurately know the rates a department would have been able to negotiate for the same engagement if the SPC was not in place. However, without attempting to measure the financial benefits of these SPCS, lead agencies are unable to determine if they are providing value for money.

The method for calculating a financial benefit is different for each SPC since contracts deliver different goods and services and exist in distinct markets.

Figure 4F
Reported financial benefit as a percentage of spend by DTF and DPC, 2016–17 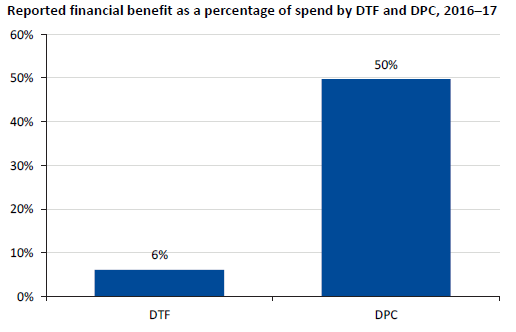 Note: Cenitex did not report any financial benefits for the Rosetta SPC. We have not reported benefits data for the SPC managed by DJR due to commercial sensitivity.
Source: VAGO, based on data provided by DTF and DPC.

We examined how lead agencies calculate financial benefits for 11 SPCs and found inconsistencies and irregularities in the methods for six SPCs managed by DPC. Figure 4G outlines these examples.

Source: VAGO, based on information provided by DPC.

Lead agencies also establish SPCs to deliver non-financial benefits. For example, the establishment of a consistent set of legally endorsed standard terms and conditions—instead of several independent agency contracts—can reduce commercial risk and legal exposure. While some of these non-financial benefits are difficult to accurately measure or even estimate, lead agencies should capture and measure them where possible.

DJR measures and reports on the non-financial benefits pertaining to the operation of social justice policies incorporated in the Legal Services Panel SPC. For example, DJR monitors whether suppliers are promoting corporate social responsibility practices in the workplace, including:

In analysing spend and savings data for SPCs, significant data issues hamper the VPS, both in terms of the quality of systems in departments and agencies, and the unavailability of comprehensive data on spend, price and volume.

Because SPC spend is fragmented across many users, and there is no whole‑of‑government procurement platform to provide overall visibility, lead agencies rely on suppliers to capture and self-report spend data. This is done monthly for the Legal Service Panel SPC and quarterly for the remaining SPCs, as Figure 4I shows. 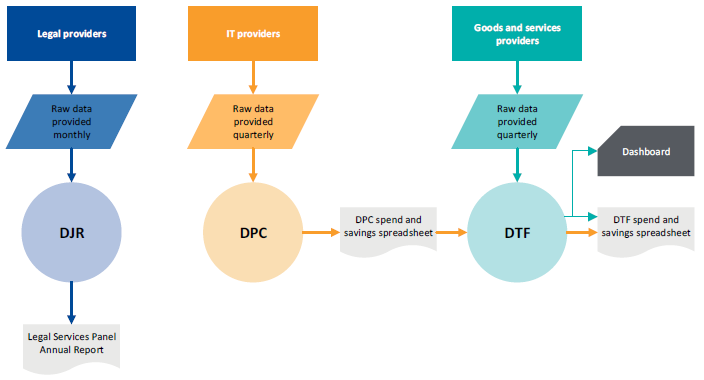 Source: VAGO based on information provided by DPC, DTF and DJR.

Lead agencies cannot easily validate self-reported supplier data and the quality of this data varies. Lead agencies undertake ad hoc checks of the data and require SPC users to confirm spend for some SPCs. However, these verification activities are limited, given lead agencies do not have all the information needed to sufficiently assess and validate the supplier reports, including access to the finance systems of SPC users.

Lead agencies should periodically audit provider reports to confirm their accuracy. However, DTF and DPC have not done so, despite the current contracts allowing for this. DTF and DPC need to address this because it affects the effectiveness and integrity of spend and benefits monitoring for SPCs.

Our review of information maintained by DTF and DPC also highlighted errors in the spreadsheets they use to track spend and benefits for SPCs. We found under-reporting of:

We also found a further issue with the accuracy of financial benefits calculated for the Travel Management Services SPC. Spend for this SPC in 2016–17 was over-reported by $5.9 million due to changes in internal processes.

Given these data issues, the actual levels of savings achieved by SPC users is very likely to be different from those reported by lead agencies.

DTF uses this information as the basis for publicly reported performance information in the State Budget papers and its annual report, so it is important that it has quality assurance measures to ensure the reported information is accurate. DTF advised that it has rectified all errors identified by this audit.