The Australian Government's national survey of child and adolescent mental health defines the most common and disabling mental health problems that children and young people in Australia experience as: 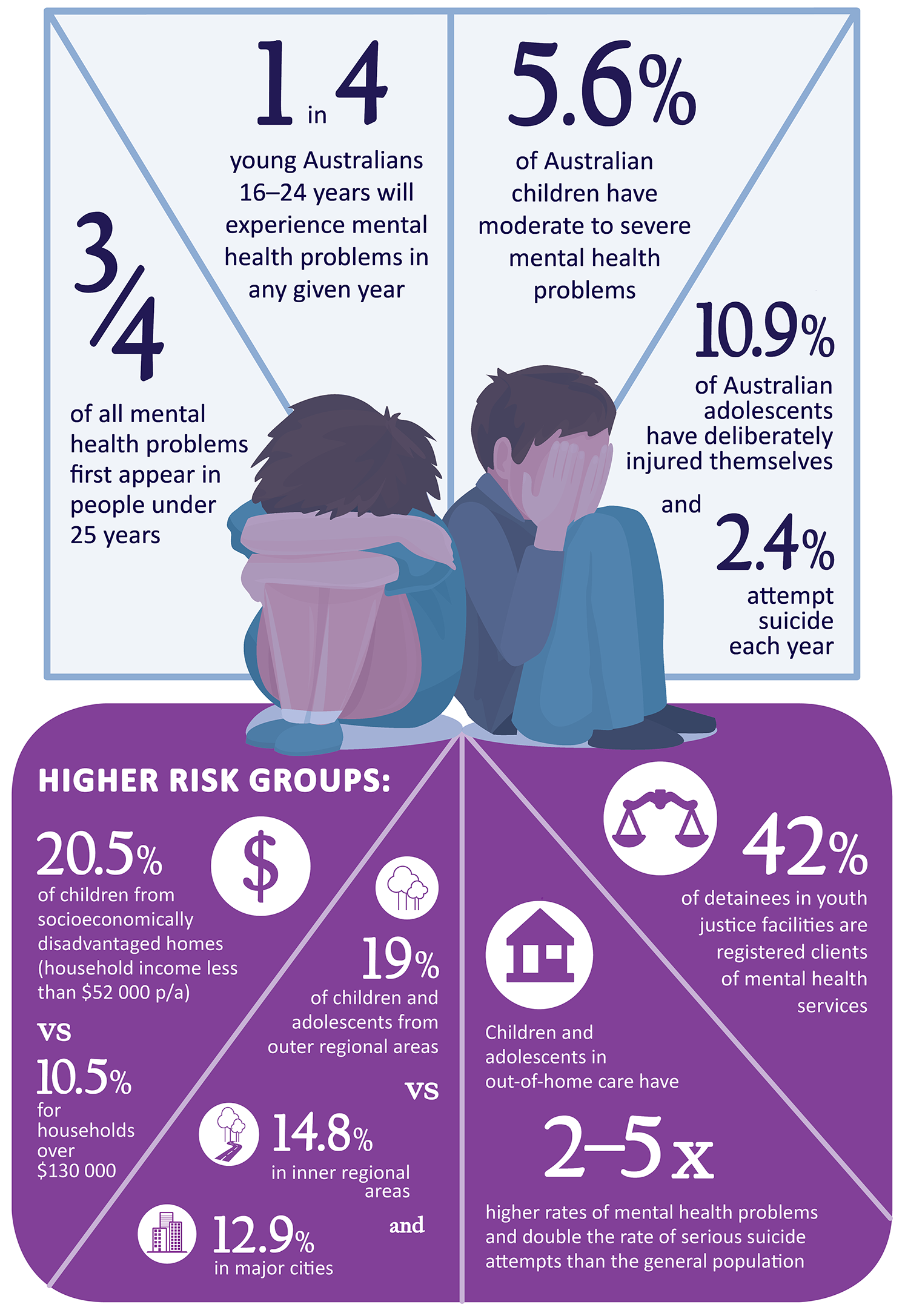 For children and young people, intervention early in life and at an early stage of mental health problems can reduce the duration and impact of the problems. Services that recognise the significance of family and social support are particularly important for children and young people. These principles informed the Australian Government's National Mental Health Plan, published in 2003. 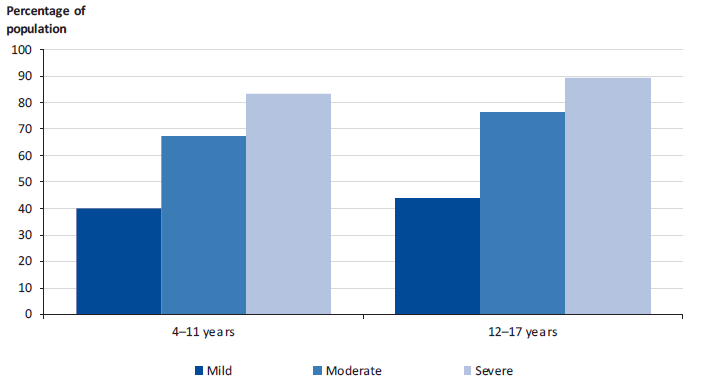 Note: Services include any service provided by a qualified health professional regardless of where that service was provided including in the community, hospital inpatient, outpatient and emergency, and private rooms; school or other educational institution; telephone counselling; online services that provided personalised assessment, support or counselling.

Department of Health and Human Services

DHHS is responsible for ensuring the delivery of good-quality health services to the community on behalf of the Minister for Health and the Minister for Mental Health. DHHS plans services, develops policy, and funds and regulates health service providers and activities that promote and protect the health of Victorians.

The Secretary of DHHS is responsible for working with, and providing guidance to, health services to assist them on matters relating to public administration and governance.

The Mental Health Branch of DHHS has 84 staff who carry out the duties prescribed to the Secretary.

The Secretary of DHHS appoints a Chief Psychiatrist, who has legislated responsibilities under the Victorian Mental Health Act 2014 (the Act) for:

CYMHS support children and adolescents through a mix of community-based or outpatient programs and inpatient treatment in hospitals, as well as a small number of community residential programs. They also provide education, upskilling and leadership on managing mental health problems to the services and agencies that care for children and young people, which includes schools, child protection and disability services. Health services manage CYMHS and are responsible for ensuring compliance with relevant legislation, regulations and policies.

Figure 1C shows one CYMHS's description of the service system for its clients and their role within it.

Figure 1C
Other services that clients of CYMHS routinely require 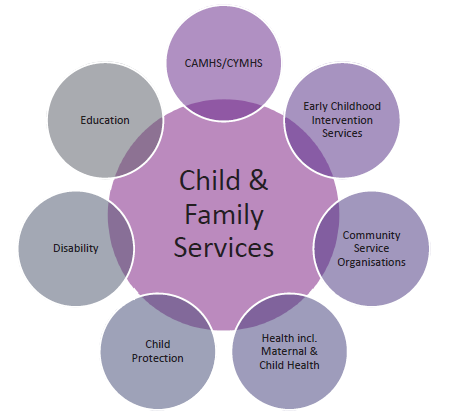 Children and young people can access Commonwealth-funded services to support their mental health needs. The Australian Government funds Primary Health Networks (PHN), which provide early-intervention services for young people with, or at risk of, severe mental illness, alongside its funding of primary care through general practitioners and headspace centres. Victoria has six PHNs that provide 28 different services. CYMHS are involved with supporting some Commonwealth-funded initiatives. Many CYMHS have active roles in managing and supporting their local headspace centres.

A 2016 study by the University of Melbourne and the Health and Community Services Union, published in the International Journal of Mental Health Nursing, found that 83 per cent of 411 surveyed staff in Victoria's mental health workforce had experienced violence in the prior 12 months, mostly comprising verbal abuse (80 per cent) followed by physical violence (34 per cent) and bullying (30 per cent). One in three victims of violence rated themselves as being in psychological distress, 54 per cent of whom reported being in severe psychological distress. The survey did not report on these matters specific to CYMHS.

In 2014, the Act came into effect. The Act prescribed many changes to the mental health system including ensuring that treatment is provided in the least restrictive way possible.

Under the Act, mental illness is defined as 'a medical condition that is characterised by a significant disturbance of thought, mood, perception or memory'.

The Act mandates that health services report to the Chief Psychiatrist on the use of electroconvulsive treatment (ECT), results of neurosurgery, the use of restrictive interventions, and any deaths that meet the Coroners Act 2008's definition for a reportable death.

The Act sets out roles and responsibilities for the Chief Psychiatrist and the Secretary of DHHS.

The 'Mental Health Principles' in the Act state that:

Children and young persons receiving mental health services should have their best interests recognised and promoted as a primary consideration, including receiving services separately from adults, whenever this is possible.

The Act does not specify an age grouping for children and young persons to which this principle would apply.

1.3 Why this audit is important

There have been considerable changes to the environment in which CYMHS operate in recent years. The types and complexity of mental health problems that children and young people seek support for is increasingly challenging for health services. Demand for services is growing rapidly due to interconnected factors including reduced stigma around mental health problems, and more youth-friendly access points for young people to seek help, such as headspace centres.

This is the first Victorian Auditor-General's Office (VAGO) audit of Victoria's child and youth mental health system, and there has been no other substantial public, external review of this topic. VAGO's 2019 audit Access to Mental Health Services found that DHHS has not done enough to address the imbalance between demand for, and supply of, mental health services in Victoria. VAGO made six recommendations to DHHS about investment planning, monitoring access, funding reforms, catchment boundaries, and internal governance.

During VAGO's audit, the Victorian Government established a Royal Commission to inquire into mental health, which is due to provide an interim report to the Governor of Victoria in November 2019 and a final report in October 2020. The terms of reference released in February 2019 give the Royal Commission an extensive brief to report on how to improve many matters in the mental health system, including access, governance, funding, accountability, commissioning, infrastructure planning, workforce, and information sharing.

The Productivity Commission is currently conducting an inquiry into The Social and Economic Benefits of Improving Mental Health, which will focus on the largest potential improvements, including for young people and disadvantaged groups. This audit adds a detailed review of this particular part of the mental health system to these larger and broader inquiries.

We selected five health services for the audit, alongside DHHS, in order to sample the varied services in Victoria's devolved health system:

The audit focused on current service delivery, with some reference to significant changes over the past three to five years.

We conducted our audit in accordance with section 15 of the Audit Act 1994 and ASAE 3500 Performance Engagements. We complied with the independence and other relevant ethical requirements related to assurance engagements. The cost of this audit was $530 000.

In accordance with section 20(3) of the Audit Act 1994, unless otherwise indicated, any persons named in this report are not the subject of adverse comment or opinion.