CPPs work in a stressful environment and face constant demands—in both their workloads and the type of work they do. A 2008 report, The Cost of Workplace Stress in Australia, found people are more likely to experience high stress levels at work when they are under pressure—for workload or responsibility—and feel unable to meet their deadlines or control their output.

CPPs' heavy case loads are a significant challenge. Unlike other forms of social work, Victoria's child protection program must action all reports and cannot refer clients elsewhere when considered to be 'at full capacity', regardless of the resulting workload. Increasing legal and administrative [1] case requirements such as court-ordered contact mean that case load burdens have also risen. In addition, longstanding staff retention challenges add to the pressure on existing CPPs to carry the increased burdens.

This part of the report discusses the impacts of these pressures on CPPs' mental health and wellbeing.

The combination of multiple mental health stressors has resulted in a working environment that puts CPPs' mental health at risk. The child protection program's team unity and collegial support is particularly strong. However, it cannot compensate for the many barriers to their ability to maintain good mental health. Currently, CPPs face a lack of organisational support for mental health management, rising stress levels, persistent high turnover and inadequate work-life balance caused by unrealistic work demands. Their good mental health is also threatened by hostility and inappropriate behaviour toward CPPs and a lack of confidence in management. Evidence shows these stressors are a key cause of ongoing staff turnover and WorkCover mental injury payments.

The PMS measures staff wellbeing though questions about stress levels, work-life balance, bullying, and confidence in grievance processes. Paired with our survey results, we found that CPPs face a concerning number of triggers for poor mental health.

In the 2013 PMS, in response to the statement 'Generally I do not feel too stressed at work', 51 per cent of CPP respondents agreed or strongly agreed, as shown in Figure 4A.

Figure 4A
PMS results, 2013: 'Generally I do not feel too stressed at work'

Figure 4B
PMS results, 2016: 'How would you rate your current, overall stress level in relation to work-related stress?' 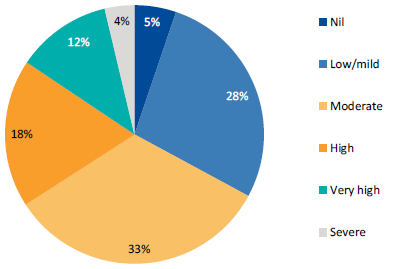 Perceptions of support—management versus leadership

Comcare considers that staff perceptions of a workplace's leadership practices and decision-making processes are a core influence on their mental health. As such, it is critical that agency heads and leadership teams are committed to addressing work-related stress risks. Without management's support, individual support actions are unlikely to improve workplace culture and mental health.

The collegial nature of the child protection environment is exceptional—in their survey responses and their conversations with us, CPPs continuously conveyed their appreciation and respect for their team members and managers. Almost without exception, CPPs described team managers as 'doing it just as tough' as CPPs themselves. Overwhelmingly they felt that teammates were their primary and most effective source of mental health support.

However, our survey results indicate that CPPs do not have the same level of confidence in their broader organisational environment. In response to the statement 'My immediate supervisor cares about my emotional wellbeing', 81 per cent of respondents agreed somewhat or strongly—see Figure 4C.

In response to the statement 'My organisation cares about my emotional wellbeing', the proportion of CPPs who agreed and strongly agreed dropped to 58 per cent, and the proportion of respondents who disagreed or strongly disagreed increased to 42 per cent—see Figure 4D.

These results show a difference in how CPPs perceive the support of their day-to-day management compared to their organisational leaders. Results of the 2016 PMS provide further evidence of this difference—27 per cent of respondents that indicated they intended to leave child protection cited 'lack of confidence in senior leadership' as a major factor in their decision to leave.

The underlying reasons for this difference are unknown—without consolidated information about how senior management addresses CPPs' mental health issues, we are unable to identify the key issues preventing greater confidence.

Interestingly, experts such as Doctor Peter Cotton—a leading Australian expert in clinical and organisational psychology—emphasise the role of leadership in occupational wellbeing. Specifically, programs that focus on improving the quality of leadership practices and organisational climate are likely to have a greater impact on reducing workers' compensation premiums than traditional OHS risk management approaches.

The impact of CPPs' excessive workloads was evident in the 2015 PMS. Figure 4E shows that only 58 per cent of CPP respondents agreed or strongly agreed with the statement 'I am able to effectively manage my workload'.

Figure 4E
PMS results, 2015: 'I am able to effectively manage my workload'

Figure 4F shows that in 2016, only 34 per cent of CPP respondents agreed or strongly agreed that their workload was appropriate for the job they do.

Figure 4F
PMS results, 2016: 'The workload I have is appropriate for the job I do'

Figure 4G
PMS results, 2013 to 2016: 'Considering your work and life priorities, how satisfied are you with the work/life balance in your current job?' 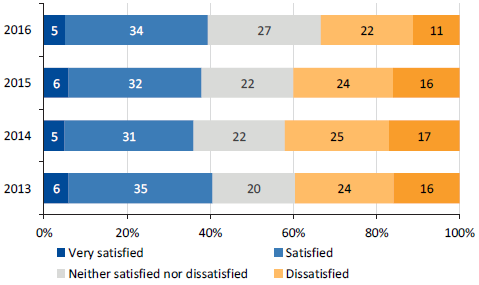 Figure 4H
PMS results, 2016: 'My organisation encourages and supports employees to have a good work-life balance'

Our survey results support the PMS data on the impact of CPPs' workloads on their personal lives—50 per cent of respondents disagreed somewhat or strongly that they can reasonably manage the demands of both their work and personal lives, as shown in Figure 4I.

Figure 4I
CPP survey results, 2017: 'I am able to reasonably balance the demands of work and personal life'

In 2016, 56 per cent of CPP respondents to the PMS who indicated that they intended to leave child protection cited excessive workload as the reason.

The cost of psychological injury

Australia's Mentally Healthy Workplace Alliance released a study in 2014 focused on the cost of mental health conditions in one year across Australian workplaces. It estimated that mental health conditions cost $4.7 billion in absenteeism, $6.1 billion in presenteeism and $146 million in compensation claims. The study notes that the combined figure of almost $11 billion does not include the additional costs associated with management, turnover and insurance.

At the same time, Dr Peter Cotton has estimated that up to 60 per cent of psychological injury claims can actually be prevented by improving morale and building supportive leadership and work teams.

Mental health claims are an indicator of an organisation's psychological health and safety status. 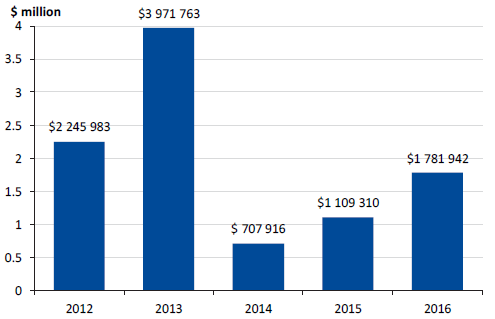 Accurate trend analysis is limited because the relatively small number of claims made each year by CPPs means even one claim can raise total payout levels significantly. Instead, looking at the types of mental injury payments made and their prevalence over time can provide useful insights—see Figure 4L. 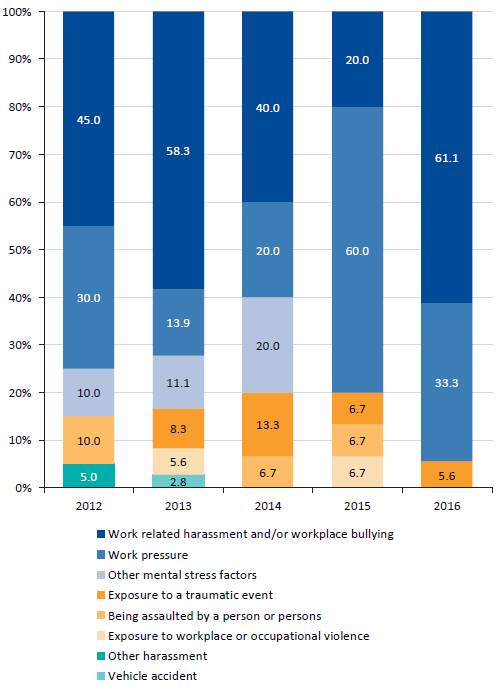 These results are consistent with our finding that workload is the primary contributor to poor mental health.

Bullying and harassment is also an increasingly reported concern in PMS results, along with a lack of confidence in DHHS's grievance processes—see Section 2.4. This lack of confidence may be contributing to the prevalence of CPPs' harassment and bullying WorkCover claims. There is value in DHHS working to understand whether there is a link between the two—and if so, what improvements would build staff confidence.

CPPs need to be resilient, have management's confidence to work effectively, and be confident that management will appropriately support them to do so. Where this is missing, workplaces can lack cohesion, be blame-oriented, and be subject to unnecessary challenges to decision-making at all levels.

Such environments make it difficult to retain staff and may result in reduced service quality and continuity for clients. This can, in turn, give the organisation a poor reputation and hinder recruitment. It can also increase costs due to an ongoing need for recruitment and induction.

DHHS states that 'the creation of a continued pipeline of suitably skilled practitioners at entry and advanced levels is critical to a well-functioning child protection service'. With excessive workload driving CPP mental health risks and contributing to turnover, DHHS has also advised government that without investment to increase the child protection workforce, the current high staff turnover—shown in Figure 4M—will continue. 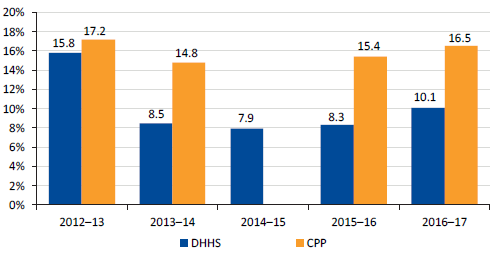 Note: DHHS was unable to provide CPP turnover rates for 2014–15.

The impact of the persistently high turnover of CPPs is well documented in records from workload review panels. Teams across the state frequently report on what could be described as the crippling impact of staff absences—resulting in other team members working overtime, and delaying or cancelling activities that are not crisis-oriented.

The impact can be particularly severe when core case carrying staff—CPP-3s and CPP-4s—leave the workforce soon after completing the mandatory 'Beginning Practice' training. Figure 4N shows the average length of employment for CPP-3s and CPP-4s from 2012–13 to 2016–17. 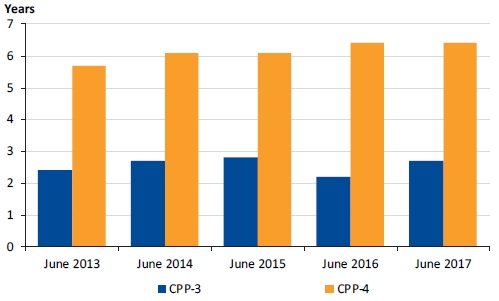 The CPP Workforce Strategy discusses the challenges of recruitment and retention of CPPs, stating 'a high volume of staff performing higher duties … and fixed-term staff backfilling ongoing roles further impacts on the total number of vacancies and ability to recruit'.

From 2012–13 to 2016–17, the core case-carrying workforce—CPP-3s and CPP-4s—had an average tenure of 2.56 and 6.14 years respectively. Figure 4O shows the recruitment and training costs for these two classifications during this period.

Because this data does not include the costs of recruiting and training other CPP levels (2, 5 and 6), or training programs in addition to 'Beginning Practice', the total cost of persistent practitioner turnover is likely to be higher again.

Our analysis shows that if DHHS had been able to lower the CPP attrition rate to the DHHS average, it could potentially have saved more than $650 000 in avoidable recruitment and training costs for 2012–13 to 2016–17.

DHHS's 2011 study of the child protection workforce provides the most recent data on the challenges facing CPPs in the first year of their employment. At one month, 23 per cent of CPPs reported concerns about work-life balance. By four months, this had risen to 46 per cent and, by nine months, 90 per cent.

DHHS's CPP Workforce Strategy intends to address the program's recruitment and retention issues through an informed workforce planning model to better forecast workforce needs. It also plans to offer a support service for all newly engaged CPPs, through which they will receive specialised and intensive administrative support during their first 12 months as a CPP.

[1] In this instance, ‘administrative’ refers to the various case management tasks that are separate from client and family/guardian engagement. Examples include court-related administration, contact facilitation (scheduling, transport and administration), and intelligence exchange with other service professionals.