Local Government Victoria (LGV) classifies councils into five Victorian Local Government Comparator Groups. These groups, or cohorts, are determined based on size, demographics, and funding, and are summarised in Figure 1A. 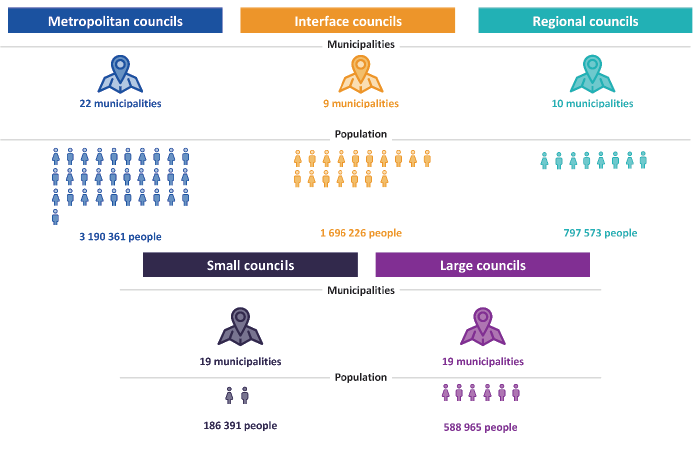 Note: Interface councils are the municipalities that surround metropolitan Melbourne, forming the interface between it and regional Victoria.
Source: VAGO, based on Australian Bureau of Statistics, Data by Region, 2017–18.

Figure 1B
Overview of the local government sector

Councils are primarily funded through rates and charges, state and Commonwealth government grants and other contributions. The majority of the sector's assets consist of the infrastructure, property, plant and equipment needed to deliver services to the community. The sector also holds a significant amount of cash and investments, which are used to fund day-to-day activities and long-term capital programs.

Along with LGV as the responsible government agency providing information, policy advice and support works to councils, councils are also represented in Victoria by:

The Bill aims to deliver on the Victorian Government's commitment to create a Local Government Act that introduces a modern framework empowering councils to improve service delivery, focus on deliberative engagement and long-term financial management to support Victoria's councils and their communities.

In response to significant building fires caused by combustible cladding in Melbourne in November 2014 and in London in June 2017, the state government established the Victorian Cladding Taskforce in July 2017. This taskforce investigated the extent of non-compliant external wall cladding on buildings in Victoria, and make recommendations for improvements to protect the public and restore confidence that building and fire safety issues are being addressed appropriately.

Following the release of the interim findings and recommendations by the taskforce in December 2017, the Victorian Building Authority (VBA), on behalf of the state government and with the assistance of councils, undertook a state‑wide audit of residential, multi-unit buildings of three storeys or more likely to have combustible cladding. Four ministerial declarations since February 2018 have given the VBA the functions of the Municipal Building Surveyor for over 300 buildings assessed as higher risk.

The state government established Cladding Safety Victoria (CSV) in July 2019 to oversee a $600 million program of rectification works on class 2 buildings of a higher risk rating across Victoria. CSV will provide support and guidance to owners and occupants of buildings with combustible cladding and aims to reduce risks to an acceptable level.

Councils need to monitor CSV's rectification program and continue to work with the VBA to identify buildings at risk.

China's restriction of its intake of foreign waste for recycling in 2018 and the collapse of SKM Recycling in July 2019 have significantly affected kerbside recyclable waste management across the sector.

While some councils found alternative short-term recycling processors, many had no alternative other than to send their recyclable waste to landfill. Public media has estimated this waste at more than 4 500 tonnes per week, across 31 councils.

Diverting recyclable waste to landfill has resulted in councils incurring more costs, which will likely be passed onto ratepayers and residents in the form of waste charges. The full impact of this is yet to be determined, given the expected time lag between councils incurring the costs and recovering them from ratepayers.

While some councils have resumed recycling following resolution with SKM Recycling's receivers, and the announced purchase of SKM Recycling, councils and the state government need to explore sustainable, innovative and long‑term solutions to recyclable waste.

High standards of governance are fundamental in enabling councils to effectively and efficiently manage the public resources entrusted to them.

While most councils have suitable controls to govern their operations, several recent governance failures have resulted in interventions by the state government through the appointment of administrators or municipal monitors.

We further analyse the sector's procurement practices in Section 3.2.