This Part summarises the results of our financial report and performance statement audits, including observations about internal controls for the sector, for the year ended 30 June 2019. Appendix B lists all the entities covered by this report and the date and nature of audit opinions issued.

The financial reports and performance statements of all the entities in the local government sector that we audited were found to be reliable.

We carried out our financial audits in accordance with Australian Auditing Standards. Figure 2A summarises the financial report audit opinions we issued, highlighting that, overall, the sector's financial reports are accurate and reliable. 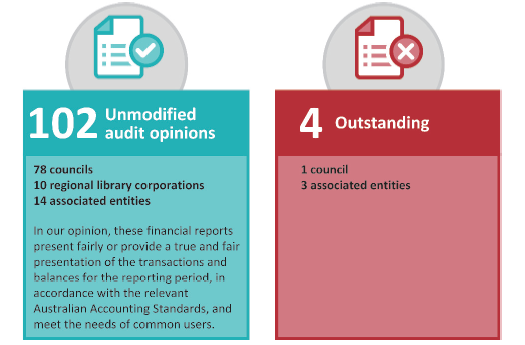 We carried out our audits of performance statements in accordance with the Local Government Performance Reporting Framework (LGPRF).

Figure 2B summarises the performance statement audit opinions we issued.

Our audits of the sector's performance statements identified accuracy and completeness errors mostly relating to:

These errors were mostly due to incorrectly using and classifying data, due to a lack of robust quality review processes when preparing performance statements.

We also identified inconsistencies in the approach taken for the unrestricted cash indicator—some councils incorrectly included term deposits with a maturity date over three months as unrestricted cash.

Where we identified material errors, we required councils to amend their indicators and statements.

Councils should ensure there are appropriate preparation, and independent quality review processes over the performance indicators, as they are key measures of council transparency, accountability and performance.

Based on previous VAGO recommendations, the Minister for Local Government approved the Strategic Directions Paper 2018–21 in February 2019 to introduce mandatory performance reporting to strengthen and improve the transparency and availability of performance information about councils.

Our performance audit Reporting on Local Government Performance—tabled in Parliament on 23 May 2019—assessed if the LGPRF communicated performance information that is relevant, timely, accurate and easy to understand for councils and the community. It examined how councils use the LGPRF to improve their performance and if councils' other performance activities, such as reporting on strategic objectives and benchmarking, are effective.

The timeliness of the published financial reports and the accuracy of draft reports presented for audit are important and interrelated quality attributes of financial reporting.

Northern Grampians Shire Council and West Wimmera Shire Council did not meet the original statutory deadline. They sought, and received, extensions from the Minister for Local Government.

In all three cases, the delay was primarily due to issues encountered with reporting of property, plant and equipment values.

In our annual audits, we consider the internal controls relevant to a council's financial and performance reporting. We also assess whether councils have managed the risk that their reports will not be complete or accurate.

To the extent that we considered them, councils' internal controls were adequate to ensure reliable financial and performance reporting. However, we identified some weaknesses, which are summarised below.

The number of unresolved prior year issues has also steadily reduced over the last four years. This indicates that councils are actively addressing their control deficiencies. While an improvement, councils should continue to address outstanding issues within recommended and agreed time frames.

We have not analysed low-risk internal control issues in this report, because they are minor issues or opportunities to improve. In Appendix C we provide the risk rating definitions applied to the issues we report in our audit management letters.

Figure 2E
Number of new and unresolved prior year management letter issues in the local government sector for the years ended 30 June, 2016 to 2019 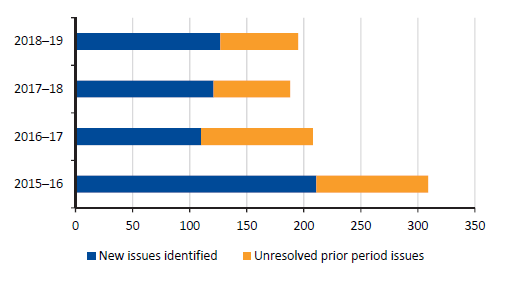 We discuss these key issues in further detail in Part 3.

In 2017–18, we reported 14 unresolved high-risk rated issues. Our follow up of these issues in 2018–19 indicated that councils continue to work through implementation plans to resolve them, with six remaining unresolved at 30 June 2019.

Timely and adequate rectification of control weaknesses will reduce the risk of:

There were 62 unresolved medium-risk issues at 30 June 2019 (62 at 30 June 2018), demonstrating that councils continue to address their control deficiencies.

Figure 2G shows the types of issues raised in prior years that are still unresolved, noting that these issues are consistent with the problematic areas previously reported on.

Across the sector, councils continue to identify found assets, albeit significantly fewer than in previous years. This is symptomatic of many issues, including:

Figure 2H
Found assets as a percentage of total infrastructure, property, plant, and equipment over the last four years 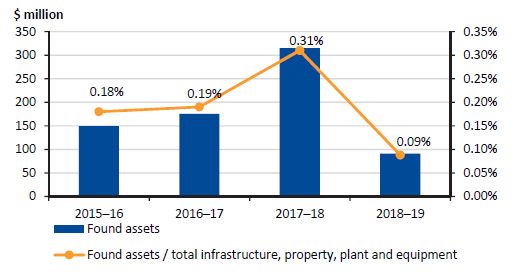