An entity is considered to be financially sustainable if it can maintain operations over the long term based on existing revenue and expenditure policies. It must also be able to absorb short-term fluctuations to income and expenditure from reasonably foreseeable internal and external factors.

If an entity needs to significantly alter revenue or expenditure policies to maintain operations, in the absence of major external shocks, this indicates that the entity is not operating sustainably. Observations about sustainability can be made from examining past and projected trends in underlying financial data and in key indicators.

In this Part of the report, we analyse data for the past five years. The detailed data and calculations that underpin the analysis are provided in the appendices. Appendix D lists our financial sustainability risk indicators, risk assessment criteria, benchmarks and results against each indicator for the 12 TAFEs over the five financial years 2012 to 2016. Appendix E contains a summary of the four mandatory performance indicators that each TAFE reports on, with results and targets for 2015 and 2016.

4.1 Short-term health of the sector

The short-term financial health of the TAFE sector can be judged by looking at:

We have considered all these elements and find improvements across the board in the short-term financial health of the TAFE sector, which indicate to us that the financial health of the TAFE sector is improving. We looked at the net result over the past five years and noted a positive outcome at the sector level in 2016. Figure 4A shows that this is the second year of positive operating results for the sector—a turnaround from losses in 2013 and 2014—with a resulting improvement in liquidity.

Note: Figures from 2012–2015 will not match prior year snapshot reports because Federation Training, Advance TAFE and Central Gippsland TAFE were not previously included.

Despite losses in 2013 and 2014, the liquidity of the sector has been strong and is getting stronger. Liquidity measures whether the sector has enough liquid assets, such as cash, to meet short-term commitments. The sector average result of 3.06 for 2016 indicates that the sector as a whole should be able to meet all commitments as they fall due during 2017.

The net result of the sector has improved because revenue has been increasing in 2015 and 2016 while expenditure continues to decline. Figure 4B shows the trend in both revenue and expenditure for the sector over the past five years. 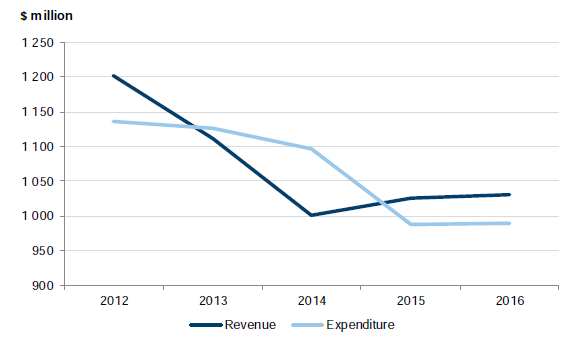 From 2012 to 2014, the TAFE sector's revenue decreased substantially due to a change in the way government funded the sector.

Government funding became contestable in 2013. This meant TAFEs no longer received financial support for operations and were funded based on student enrolments. They had to compete with the private sector for students, while total student numbers were falling, which reduced the available revenue pool.

This change in the funding model, coupled with declining student numbers, led to financial viability issues for the sector in 2013 and 2014.

The improvement in revenue in 2015 and 2016 has been driven by additional government grant funding, rather than growth in revenue. Student numbers continued to fall, and all other sources of revenue such as student fees and contestable funding declined in 2015 and 2016.

The decline in revenue from income rather than grants ultimately reduces TAFEs' financial flexibility, and thereby their fiscal autonomy. The sector received a total of $278.6 million in state government grants in 2016, up from a low of $74.6 million in 2014 and $211.9 million in 2015.

The new Skills First funding model will apply in 2017. This is expected to provide opportunities for TAFEs to receive further government financial support in targeted areas. As a result, we expect revenue growth to be maintained, and there are opportunities for the financial sustainability of the sector to further improve.

The sector continues to focus on efficiency and reducing expenditure to improve its financial outcomes.

Total expenditure in the sector declined by $147.3 million (13 per cent) from 2012 to 2016. Most of these savings were achieved by reductions in employee benefits payments. Redundancy payments made in 2013 and 2014 added to employee costs, while recent decreases reflected no further significant redundancies and savings achieved through lower staff numbers.

The results from the TAFEs' performance reporting indicate they expect to achieve further efficiencies in operations. Efficiency and effectiveness is measured in the performance statement of each TAFE through two measures:

The board of each TAFE sets targets for these measures before the start of the financial year.

The performance statement results for 2016 show that most TAFEs have not achieved their own set targets for these two measures. They also show that for some TAFEs the actual result in 2016 is less than what was achieved in 2015.

Figure 4C provides a summary of the results of these two mandatory indicators against the target for each TAFE. The 2015 targets and results are included in Appendix E.

Declining student revenue would have affected the results in Figure 4C. However, taking this into account, the results against the targets show that the TAFEs themselves expected to operate more efficiently and effectively in 2016 than they did.

Figure 4C also shows that there is a wide variation in the targets set by TAFEs for each indicator. There is no benchmark as to what the targets for these measures should be for an efficient and effective TAFE.

Some variation in targets would be expected to account for the different metropolitan, regional and rural locations where courses are delivered, and differences in the mix of courses and teaching requirements. However, the absence of a benchmark makes it difficult to determine whether the targets we are using to assess the actual performance of TAFEs are reasonable.

Asset maintenance and renewal is an emerging risk for the sector. The TAFE sector is asset rich and its large investment in long-lived physical assets presents longer-term financial sustainability challenges.

With such a large portfolio of assets and a constrained financial environment, it is difficult for the TAFE sector to make funding available for new assets, major maintenance and renewal.

We have flagged this challenge in previous reports and noted that, if not addressed, over time the assets of the TAFE sector may no longer be fit to deliver the educational outcomes the community is seeking. This has not changed in 2016.

Figure 4D shows that a decrease in assets occurred in 2014. At that time, some TAFEs sold off assets as part of their response to the changing funding environment and the need to reduce costs and overheads. The recent growth in 2016 is due to the revaluation of existing assets.

Figure 4E shows our capital replacement indicator results for the sector for the past five financial years.

Financial sustainability of the TAFE sector, 2012 to 2016

Note: Figures from 2012–2015 will not match prior year snapshot reports because Federation Training, Advance TAFE and Central Gippsland TAFE were not previously included.

Figure 4E shows a downward trend from 2012 to 2015, with the TAFE sector only spending half the amount on asset replacement and renewal compared to the amount of assets consumed. This is significantly below a ratio of one to one, which is the long‑term benchmark we consider is needed to maintain asset function.

The improvement in capital replacement results in 2016 is because the sector received $71 million in capital grants from government. The bulk of this funding was for three TAFEs and specific projects:

This funding on a limited number of projects masks much lower expenditure on self‑funded asset renewal and replacement in the 2016 year than our capital replacement ratio recommends.

Asset maintenance spending has remained consistently low over the past five years, fluctuating between $15.8 million and $19 million.

During 2016, the Department of Education and Training (DET) gathered detailed information from the TAFEs and performed an analysis to quantify the maintenance spending and needs of the sector.

The DET analysis of maintenance spending has been done in the context of asset replacement value, which is the amount that will be required to replace an asset if the asset is lost. It is different to the fair value that is reported in the financial statements, which is the market value or written down value of the asset.

Figure 4F shows each TAFE's asset maintenance expenditure for 2016 as a percentage of the estimated total asset replacement value.

Source: VAGO, based on data from DET.

DET's general guideline is that a TAFE should spend between 2 and 2.5 per cent of the asset replacement value on asset maintenance every year.

Figure 4F illustrates that in 2016 the TAFE sector did not achieve this, and spending in the sector was significantly lower than needed at an average of only 0.7 per cent. No individual TAFE achieved the 2 per cent benchmark.

Over time, the year-on-year underspend on asset maintenance creates a backlog of maintenance that increases the cost of bringing an asset up to an acceptable standard. This is currently creating challenges for some TAFEs.

DET asked each TAFE to estimate the condition of its assets and its maintenance backlog. The results are summarised in Figure 4G.

Using the backlog figure, DET has been able to calculate a facilities condition index for each TAFE. This measure allows comparison of relative asset condition across the sector.

(b) This excludes $100 million required for the Aradale Asylum site, which was allocated to Melbourne Polytechnic and is currently in very poor condition.

Source: VAGO, based on data from DET.

DET's assessment shows that the condition of assets has been rated as good at seven TAFEs. There is a larger challenge at the five TAFEs whose asset condition is rated as fair or poor. At the two TAFEs with assets assessed as poor, there is a higher risk that some of their assets may become unfit for purpose due to a lack of maintenance.

All the evidence shows that asset maintenance is an emerging risk for the sector. DET is aware of the risk and has begun work on the strategic asset planning and maintenance issues in the TAFE sector.