Buses are an important part of Melbourne's public transport system providing local and cross-town travel and connections to rail and tram networks. They also provide an alternative to travelling by car. Buses are often the only readily accessible form of public transport available for people living in Melbourne's middle and outer suburbs. As Figure 1A shows, around 82 per cent of Melbourne dwellings are within 400 metres of a bus route compared to around 20 and 30 per cent for trams and trains respectively.

Figure 1A
Melbourne dwellings within 400 metres of public transport, 2010 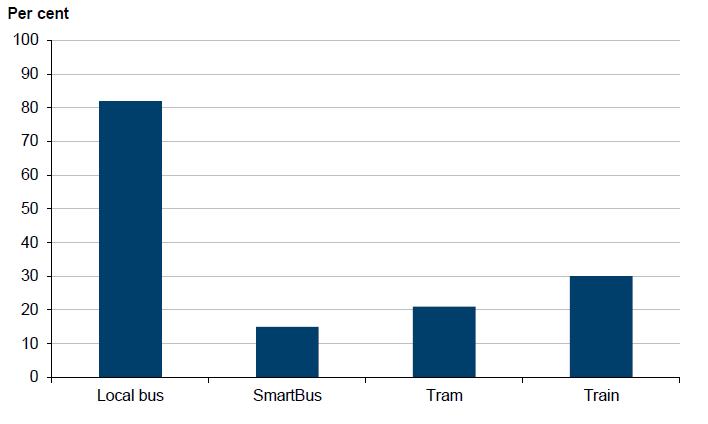 In the 10 years since 2004–05, metropolitan bus patronage has been steadily increasing overall, as Figure 1B illustrates.

Melbourne's bus network is extensive—it consists of more than 300 routes covering over 5 500 kilometres, and is serviced by approximately 1 700 buses. The arrangements underpinning the delivery of these services are set out in: 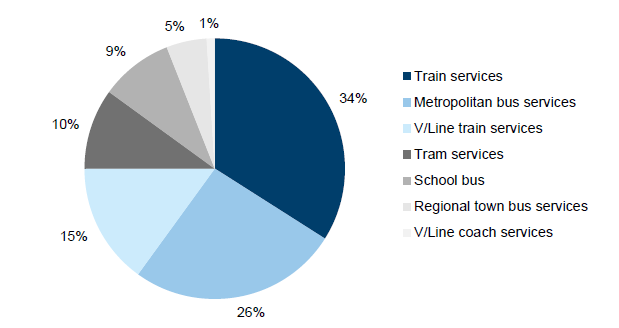 From 1869 to 1974, bus services were provided by private, self-funded companies which developed bus routes, determined their own schedules and fares, and bought bus depots and vehicles. In 1974, the government introduced regulated fares across the whole metropolitan public transport system and began subsidising bus operators. This marked the start of contractual relationships between government and bus operators.

Despite bus operators becoming increasingly financially dependent on state subsidies throughout the 1980s and 1990s, the bus industry retained the view that its history of private investment entitled it to exclusive rights to operate the routes they had developed. Accordingly, the industry disputes the government's right to competitively tender services. However, our 2009 report Melbourne's New Bus Contracts noted that the state does not accept this position. The issue has never been legally tested and remains a potential risk and barrier to reform.

The bus industry has not been exposed to the same open market competition as Melbourne's other public transport modes. Instead, contracts have historically been renewed by negotiating with incumbent operators only. Throughout the 1990s, successive reports by the then Industry Commission, the Victorian Commission of Audit and VAGO noted that these negotiated contracts lacked incentives for operators to minimise costs and improve services.

In the early 1990s the state sought to increase bus services while setting conditions for future bus industry reform.

The state established and privatised two companies—the National Bus Company (NBC) and Melbourne Bus Link (MBL)—to run new bus services independent of the private operators. As the private operators could not claim the same historic ownership rights over the routes they operated, the state had more control over the related procurement and contracting decisions.

Further additional routes—the SmartBus orbital routes—were established by the state in 2006 under an interim contract with the former Department of Transport, with the intention of offering the routes to tender in December 2012.

On 1 July 2008, 29 metropolitan bus contracts came into effect. These were established through negotiation with the incumbent operators and fell into the following two categories:

The 27 contracts for the remaining 70 per cent of services are traditional fee‑for‑service style arrangements, with fixed routes and limited incentives or penalties available to encourage performance improvements or innovation. This has not changed significantly since the late 1980s.

Previous VAGO audits in 2009, 2012, 2013 and 2014 have highlighted ongoing challenges with the delivery and performance of Melbourne's bus services.

This audit focused on the 27 private contracts, and found that while there were likely to be significant gains from the new contracts, the state had not fully achieved its procurement objectives.

The key areas identified where the new contract regime failed to deliver on the procurement objectives include:

The audit also found the operational performance regime for bus services needed to be strengthened to provide greater assurance about the on-time running of buses.

This audit examined the performance of public bus, tram and train services across Victoria and found that the former Department of Transport was not prepared for the rapid growth in public transport patronage between 2004 and 2009.

The audit also found that information for measuring bus performance fell short of expectations for sufficiency and reliability. While the department introduced a rolling program of audits of contractual compliance for metropolitan buses, it had not implemented VAGO's 2009 recommendation to use its contractual rights to examine and verify operators' records of on-time running.

The audit found that residents in growth areas generally have less frequent and direct bus services compared to those in metropolitan Melbourne. It also noted that significant investment of more than $10 billion is required to address the current infrastructure and service backlog, and additional recurrent funding of $197 million per year is needed to improve bus services across metropolitan Melbourne.

This audit examined how well Public Transport Victoria (PTV) is managing the coordination of trams, trains and buses, and specifically how its activities and existing contractual arrangements support the achievement of seamless travel within and between different modes.

The audit found that many of Melbourne's bus routes currently have long wait times, indirect routes and do not operate on schedules designed to harmonise well with the rail network or other bus routes. This reduces their usefulness for commuters and impedes patronage growth.

The audit also highlighted that the limitations with the tracking technology used on most buses mean that PTV is highly reliant on self-reporting by operators for determining penalties and other incentive payments. The absence of robust performance information and heavy reliance on self-reporting by bus operators means it is not possible to reliably use financial incentives to improve bus services.

A key feature of the MMBF is the performance-based incentives included in the franchise agreement, similar to those used for tram and train services. The MMBF contract incorporates financial incentives and penalties linked to key performance targets, designed to improve services and patronage performance.

The expected benefits of the MMBF agreement include:

These benefits were expected to be realised in two stages:

In approving the open tender for the MMBF in September 2011, the then government also approved a reform agenda and determined that it would consider MMBF as having achieved value if it:

Figure 1D summarises the main priorities of the reform agenda.

These reform priorities were reflected in the MMBF agreement, making it fundamentally different to any other contracting arrangement within Melbourne's bus network. It contains a suite of incentives and penalties designed around performance targets—including reliability, punctuality, patronage growth and customer satisfaction. It also gives the operator flexibility to design and propose route changes in collaboration with PTV, and requires the operator to review all routes and do a total rebuild of the current bus timetable—known as a Greenfields timetable—in 2015.

These reforms are intended to establish an environment for wider reforms when the contracts for the remaining 70 per cent of services expire in 2018.

1.2.3 Objectives and outcome of the tender

The MMBF agreement was awarded through a competitive open tender process, referred to as the Metropolitan Bus Services Project (MBSP). This process was expected to reduce the cost to the state and increase competition in Melbourne's bus market.

The MBSP had the following objectives:

The open tender process for the MMBF was approved in September 2011 and on 26 April 2013 the government announced the chosen operator.

The MMBF agreement became operational in August 2013. It is worth approximately $1.718 billion in nominal terms over 10 years and comprises 50 bus routes, 100 school special routes, 504 buses and around 1 000 drivers operating from seven depots across Melbourne.

PTV oversees public transport operators who are responsible for the day-to-day operation of services and, subject to PTV's specifications, for improving scheduling to support better connectivity between transport modes.

PTV is responsible for planning, tendering, negotiating and managing all bus service contracts. While PTV was responsible for managing the MMBF procurement process, initial planning occurred prior to its creation, and was the former Department of Transport's responsibility.

The Department of Economic Development, Jobs, Transport and Resources

The MBSP was initiated by the former Department of Transport in April 2009, now incorporated within the Transport Division of the Department of Economic Development, Job, Transport and Resources (DEDJTR). However, when PTV became operational in April 2012, most of the staff in the public transport division transferred to PTV along with responsibility for MBSP.

DEDJTR is currently part of a bus services reform joint working group with PTV. This group is responsible for formulating plans on the future of bus services, contractual and legislative issues, options for dealing with expiring contracts, and any other elements of reform.

The Department of Treasury and Finance

The MMBF was designated a complex procurement and was therefore subject to additional oversight from the Department of Treasury and Finance (DTF) and the Treasurer under the High Value High Risk framework. DTF worked with PTV in trying to achieve value for money procurement outcomes at both the working group and steering committee level.

This audit examined whether the state has effectively secured value for money from the new MMBF arrangements by assessing whether:

The audit also examined whether appropriate planning to optimise value for money in future metropolitan bus contracts is underway, including progress on implementing the lessons learned from the MMBF procurement.

The audit includes PTV, DEDJTR and DTF due to their involvement in the MMBF procurement process and future bus contract planning.

The audit was performed in accordance with the Australian Auditing and Assurance Standards. Pursuant to section 20(3) of the Audit Act 1994, unless otherwise indicated, any persons named in this report are not the subject of adverse comment or opinion.

1.6 Structure of the report

The report is structured in the following parts: