Victorian residents and businesses threw away some 12.9 million tonnes of waste in 2016–17. SV predicts that this waste will reach 20 million tonnes by 2046. Metropolitan Melbourne accounts for around 80 per cent of total state waste.

Councils and private waste operators manage rubbish and discarded materials through a network of collection and transportation services, and recovery, reprocessing and landfill facilities. Recovery is the separation of recyclables from waste destined for landfills. The government's role is to provide strategic direction, support and, where necessary, effective regulation.

Community participation in the recycling process is an important component of the state's waste system. To invest their time in separating bottles, papers and other recyclables, Victorians need confidence that these materials are properly recycled.

For the purposes of this report, 'waste' refers to all materials that consumers and business have discarded.

Waste is typically sourced from:

Waste generated from these streams include glass, paper and cardboard, metal, plastic, tyres, FOGO, e-waste, and general rubbish. Some waste materials are hazardous in nature, including asbestos and chemical wastes from industries. EPA regulates the handling, storage, transport and disposal of these materials through the Environment Protection (Industrial Waste Resource) Regulations 2009.

The main categories of value for reprocessing in Victoria are:

According to available 2016–17 data, the Victorian waste and resource recovery system managed approximately two million tonnes of paper and cardboard. Of this, Victoria recovers 1.5 million tonnes, or approximately 75 per cent, with the remaining disposed of in landfill.

A tyre becomes a waste tyre when it can no longer be used for its original purpose. Every year, Australians generate 56 million waste tyres.

If not properly managed, waste tyres can cause significant environmental and public health risks. Whole tyres are flammable and pose a considerable fire hazard when stored together or stockpiled. If ignited, large volumes of waste tyres are difficult to extinguish and can have severe impacts on the air, soil, and water due to pollution. This can result in high economic costs and liabilities.

Organic waste refers to any material that comes from a natural and biodegradable substance. It can be solid material such as timber and woody garden waste, food, or liquid waste such as grease trap waste or dairy effluent. It includes food waste from households, supermarkets, manufacturing, restaurants, and agricultural and effluent waste.

According to available data, organic waste makes up to 35 per cent of the total solid waste sent to landfill in Victoria. If not managed properly it has the potential to impact negatively on the community, environment and public health.

Available data indicates that food waste has the lowest recovery rate of all materials. According to the SWRRIP, the system currently manages nearly a million tonnes of food waste but in 2015–16 only 10 per cent was recovered:

E-waste includes televisions, computers, mobile phones, kitchen appliances and white goods. It is any product that uses an electric current to run. These items can contain valuable materials, such as gold, copper and platinum. E‑waste can also contain highly hazardous materials.

E-waste makes up only 1 per cent of waste currently going to landfill; however, it is one of the fastest-growing waste streams in Australia. E-waste from televisions and computers alone is expected to grow by over 60 per cent, or 85 000 tonnes, by 2024.

In late 2014, the government committed to banning e-waste from landfill to reduce harm to the environment and human health, and increase recovery of the resources in e-waste.

The state's waste sector comprises operators that collect, sort, recycle, recover and dispose to landfill waste materials generated through the three waste streams. Figure 1A shows the infrastructure used to manage this waste.

Source: VAGO, from the SWRRIP.

According to SV, as at 1 June 2017 the state has more than 630 sorting, recycling and landfill infrastructure sites. Figure 1B provides a breakdown of these sites by region.

Figure 1B
Number of waste infrastructures across Victoria

Source: VAGO, from the SWRRIP.

The Act, which established EPA, is also the primary legislation that deals with Victorian waste management and resource recovery. It establishes a waste management hierarchy, which sets out an order of preference for how waste should be managed to help achieve the best possible environmental outcomes. This is shown in Figure 1C. 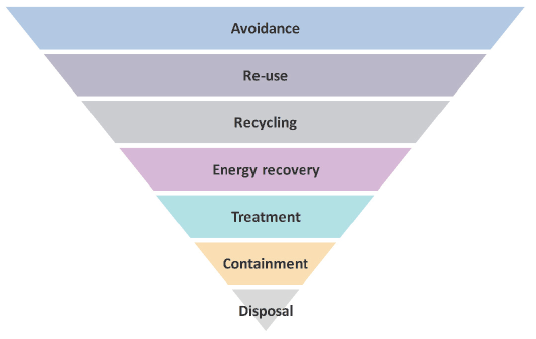 The 2014 amendments to the Act established the Victorian Waste and Resource Recovery Infrastructure Planning Framework (the Framework). The Framework's objective is to ensure long‑term strategic planning for waste and resource recovery infrastructure at state and regional levels through integrating needs, policy and statewide coordination. The Framework consists of:

In 2013 the then Victorian Government released Getting Full Value (GFV) as the overarching statewide waste policy. To deliver on its objectives, GFV mandated the development of the SWRRIP, RWRRIPs and several other waste strategic plans.

The current government did not endorse GFV as the state's waste policy when it came to office in 2014 and has not released a new policy. In 2018–19 the government approved a $9.02 million funding allocation for DELWP to develop a whole-of-government waste policy that incorporates circular economy principles. DELWP advised us that this will be released in 2020.

Under the Act, SV must prepare the SWRRIP to provide strategic direction for the development and use of waste and resource recovery infrastructure for 30 years. SV published the first SWRRIP in 2015 and republished it in 2018 to incorporate the priorities and infrastructure analyses of the WRRIPs of the seven WRRGs.

The Act requires SV to review the SWRRIP at least once every five years. This must include an analysis and description of current and future waste and resource recovery sources, levels, and trends.

RWRRIPs must include an analysis and description of current and future waste and resource recovery sources, levels, and trends. RWRRIPs are also required to include an infrastructure schedule for their region and a description of how the long-term directions of the SWRRIP will be implemented locally.

Maximising the recovery and reprocessing of resources from waste relies on goodwill from the community and the effective collaboration of the state government, responsible agencies, and councils. Clarity in roles and responsibilities is critical for effective and coordinated planning and implementation of the state's waste programs and activities.

DELWP is primarily responsible for:

According to the Sustainability Victoria Act 2005 and relevant waste strategies and plans, SV is responsible for:

Councils provide a range of waste disposal and recycling services for their communities including:

Other roles and responsibilities

Government waste and resource recovery instruments—including the VORRS and MDS—also allocate roles and responsibilities to relevant agencies and councils.

For example, the RISP identifies the lead agencies for specific responsibilities. Some of these are shown in Figure 1D.

Figure 1D
Roles and responsibilities according to the RISP

Source: VAGO, from the RISP.

1.5 Impact of the foreign export market

According to SV data, in 2016–17 Victoria exported three-quarters of recovered plastic and nearly half of recovered paper and cardboard for offshore reprocessing. A significant amount of Victoria's waste export—nearly all plastic exports and 75 per cent of paper exports—went to China.

China formally announced that it was restricting its waste imports in a notice to the World Trade Organization in July 2017, and the restrictions went into force at the start of 2018.

However, in 2013 China had already been working to block imports of low‑quality recyclables under a crackdown referred to as the Operation Green Fence Policy. Customs officials increased their inspection of scrap plastic, paper, and metals to reject contaminated imports. Figure 1E shows that China's import of waste started decreasing in line with the implementation of the Operation Green Fence Policy. 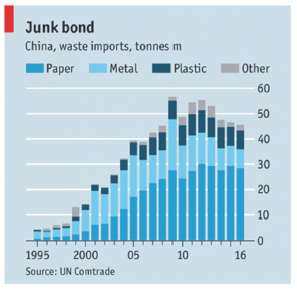 The same SV-commissioned research noted that international commodity prices for these materials declined significantly from: 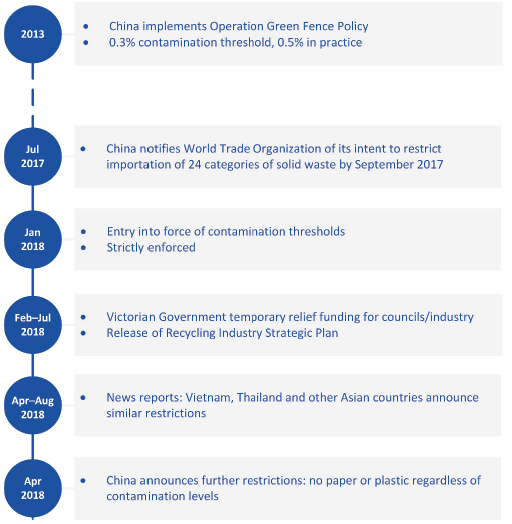 When China started significantly restricting its importation of scrap paper, plastics and metal, these private resource recovery facilities notified Victorian councils that instead of being paid for these materials, councils would need to start paying $70 per tonne to have them collected.

Councils had little choice but to agree as the alternative would be to stop kerbside recycling services to Victorian households. The full impact of this contract revision varied from council to council but DELWP estimates it at about $120 to $150 per tonne on average.

The Victorian waste sector is currently facing many challenges, in particular the closure of export markets for recyclables. Illegal dumping, large-scale stockpiling of recovered resources, and illicit storage of hazardous chemicals are increasingly exposing the Victorian community to health and environmental risks.

Our 2011 Municipal Solid Waste Management performance audit report found that contrary to the objectives of the then Victorian waste policy Towards Zero Waste (TZW), waste generation in Victoria continued to rise. The audit found that a lack of effective planning, leadership, coordination, and oversight from responsible agencies hindered the effective implementation of TZW. The audit's three recommendations were all accepted.

1.7 What this audit examined and how

This audit examined whether responsible agencies are maximising the recovery and reprocessing of resources from Victoria's waste streams.

We conducted our audit in accordance with section 15 of the Audit Act 1994 and ASAE 3500 Performance Engagements. We complied with the independence and other relevant ethical requirements related to assurance engagements. The cost of this audit was $540 000.