Achieving sustainable cost savings is one reason governments choose to outsource the operation of prisons to private companies. Demonstrating that prisons can operate at a lower cost while maintaining quality standards can support efforts to improve efficiency in the public prison system.

We have also included the costs CV incurs centrally for managing the system and allocated these across individual prisons. We based the allocation on each prison's share of the total average prison population for the year, adjusted where necessary to better reflect cost attribution. For example, we allocated CV's centrally incurred contract management costs to the privately operated prisons and the three public prisons with significant facilities provision and management contracts—Hopkins, MRC and Marngoneet. Broader DJR corporate overhead costs and the capital assets charge applied by DTF as part of the output budgeting process are not included in these costs.

The private prisons cost the state up to 20 per cent less than the average for publicly operated prisons with the same security rating and system-wide average costs. More efficient staff shift patterns largely account for these savings.

Total system costs have increased steadily since 2010–11 due to ongoing growth in prisoner numbers driven by sentencing and parole reforms, and an increasingly complex prisoner population. Figure 4A shows that the total system costs for male prisons increased by 90 per cent from 2010–11 to 2016–17, rising from $425.9 million to $811.2 million. Prisoner numbers increased by 49.5 per cent during this period. 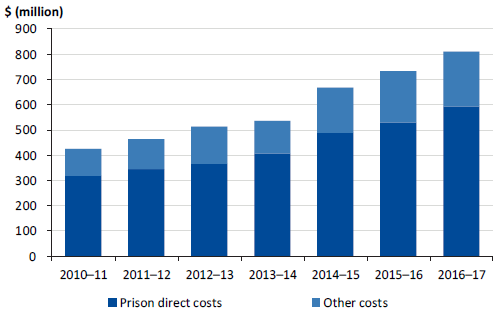 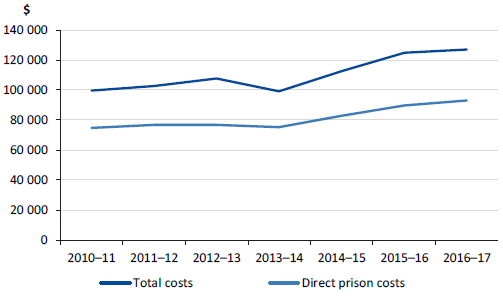 We used CV information on system-wide and individual prison costs, from 2010–11 to 2016–17, to compare the costs of private prisons against system‑wide averages and public prisons with the same security ratings and similar characteristics.

While these comparisons yield insights, they should be treated with caution. Differences in the characteristics of individual prisons including location, age, size, physical layout, security classification, prisoner profile and their role or function within the overall system influence their operating costs. These differences make it difficult to compare costs on a 'level playing field'.

Despite this, our comparisons show that the private prisons cost the state less than the average for publicly operated prisons with the same security rating. DJR's advice to government in recent years, and our review of available benchmarking, indicates that the lower costs are largely attributed to more efficient staff shift patterns.

Figure 4C shows that the average annual total costs per prisoner at Port Phillip and Fulham were lower than those for public prisons with the same security classifications. 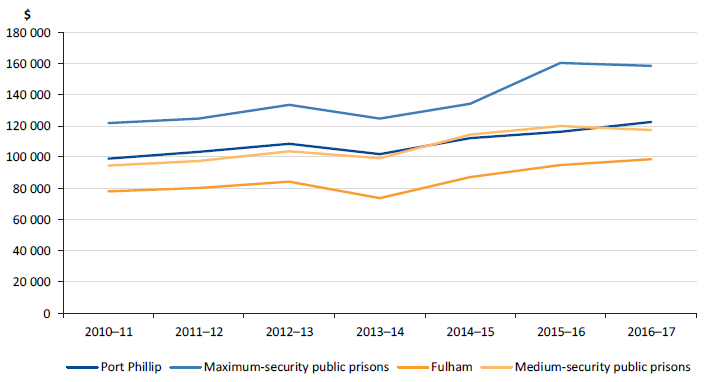 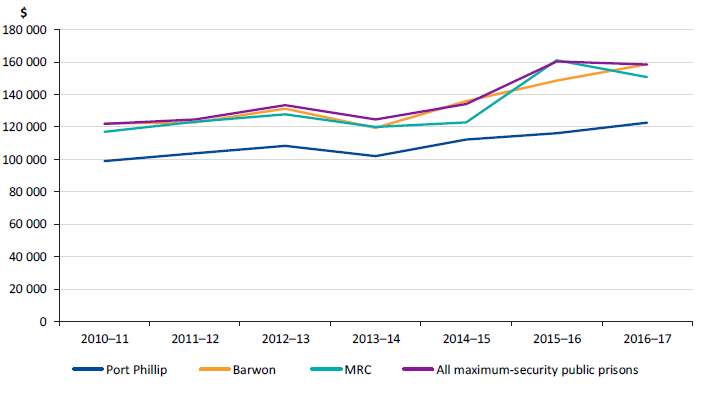 The value-for-money assessment undertaken by CV when negotiating the new contract for Port Phillip concluded that the cost bid from G4S was significantly lower than the operating costs at Barwon and similar to, but still lower than, the costs at MRC. CV considered MRC the best cost comparison for Port Phillip due to its similar prisoner profile and level of activity. 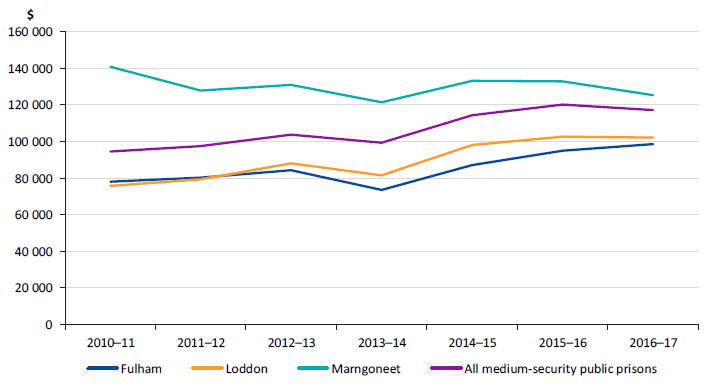 The value-for-money assessment undertaken by CV when negotiating the new contract for Fulham concluded that GEO's pricing was lower than the benchmarked costs.

4.4 Why do private prisons cost the state less to operate?

DJR's advice to government in 2014 and 2015 recommending the negotiation of contract extensions for Fulham and Port Phillip consistently indicated that these prisons were more than 20 per cent cheaper to operate than publicly operated prisons.

A number of reviews found that private prisons:

In September 2014, the government responded to these reviews by asking CV to investigate opportunities for workforce and rostering efficiencies within public prisons. CV advised us that it continues to examine and progress these opportunities.

Under the new contracts, the average annual per-prisoner costs are broadly consistent with the past few years. See Part 5 for discussion of the value‑for‑money assessments that informed the new contracts.

We examined and compared private prison costs, as agreed in the new contracts with public prison costs for 2016–17.

The private operators have lower labour costs, but their utility costs are mixed.

We did not find significant differences in the staff pay rates between the public and private prisons for the most common roles, such as correctional officers.

We compared the agreed base utility costs in the new contracts for Fulham and Port Phillip with utility costs for broadly similar public prisons, covering water, electricity and gas. Our comparison shows significant variation across the public and privately operated prisons.

Under the new contracts, Fulham has a higher average utility cost per prisoner than Port Phillip, primarily due to higher expected water and sewerage charges for its location, which also contributed to Barwon's high utility costs.

4.6 Actual costs under the new contracts

As part of the contract negotiations, both operators submitted detailed financial bids using cost templates specified by CV. CV incorporated the final agreed cost templates into the new contracts as an attachment to the payment schedule, and these costs are key 'base amounts' underpinning payments made to the operators.

We examined the operator's claimed and actual costs under the new contracts using actual staffing rosters for labour costs and invoices for subcontracted services, local government charges and utility costs passed on to the state. We found no significant variances.

The private operators are responsible for the design, costing and procurement processes for state-funded capital works on their sites. CV actively reviews key steps, agrees outcomes and then pays for the works. The state provides funding for capital costs based on an up-front agreement of both the capital cost and the operational cost impact.

CV performs due diligence and other processes, including reviewing pricing and costs and, in some cases, engaging quantity surveyors to support decisions on new state-funded capital works. We reviewed CV's due diligence for two state‑funded capital projects—one at Fulham and one at Port Phillip—and found CV's processes for assessing and overseeing both projects were rigorous.