Declaration by the Auditor-General and Executive Officer

In our opinion, the measures used and results reported in the accompanying Performance Statement of the Victorian Auditor-General's Office in respect of the 2018–19 financial year are presented fairly, and are consistent with the Standing Directions under the Financial Management Act 1994.

The Statement includes the 2018–19 performance indicators agreed with the Assistant Treasurer as set out in Budget Paper No. 3, actual and comparative results achieved for the financial year against targets where applicable, and explanations of any significant and/or material variance between the actual results and performance targets.

As at the date of signing, we are not aware of any circumstance which would render any particulars in the Performance Statement to be misleading or inaccurate.

We authorise the attached performance statement for issue on 23 August 2019.

Notes to the Performance Statement

The Victorian Auditor-General's Office must report annually on expected and actual performance as part of parliament's departmental performance statement in Budget Paper No. 3. This information is not audited.

While we are not required to include an audited departmental performance statement in our Annual Report, Financial Reporting Direction (FRD) 8D requires departments to annually provide a comparison of output targets and actual performance in their report of operations, and reasons for any significant or material variances.

In the absence of any broad mandatory performance reporting standards, we have prepared this performance statement in a format consistent with that used in Budget Paper No. 3, and in line with the Standing Directions under the Financial Management Act 1994, Performance Management Framework, and FRD 8D.

This performance statement includes the performance measures, targets and results of our two parliamentary output groups, with explanations of significant variations between targets and actual results. We deem significant as greater than a 5 per cent variance. We have not provided notes for variations within the materiality thresholds.

Where applicable the results in the performance statement have been prepared on bases consistent with those reported in the audited Financial Statements.

In comparison the state and territories ACAG benchmark average elapsed time for performance audits in 2017–18 (the latest available data) was 10.2 months.

3.3 The average cost of audit opinions issued on financial statements was $48 400, which is similar to our prior year result of $48 200. The lower than target result is partly due to efficiencies from greater use of data analytics, which allowed us to keep overall fees charged to agencies relatively unchanged from the prior year.

3.4 Data for this audit quality measure is obtained through quality reviews of a targeted selection of completed financial audits as part of our three-year review quality assurance coverage plan. The measure is intended to reflect our level of compliance with the requirements of the applicable Australian Auditing Standards, Australian Accounting Standards and Accounting Professional and Ethical Standards.

We did not meet our target: 10 per cent of our targeted sample of reviewed audit files were found to have some material departures from professional standards (i.e. one out of ten audit files reviewed). However, this is better than industry published rates and a significant improvement on the prior year result of 59 per cent.

Our findings do not necessarily mean there are material misstatements in the overall financial reports of these entities. Rather, in our view, in these cases we did not demonstrate a sufficient basis to form and issue these opinions. In addition, there was a very low rate of disclosure of prior period errors by agencies during 2018–19 indicating that material departures are not resulting in a high level of material misstatements. 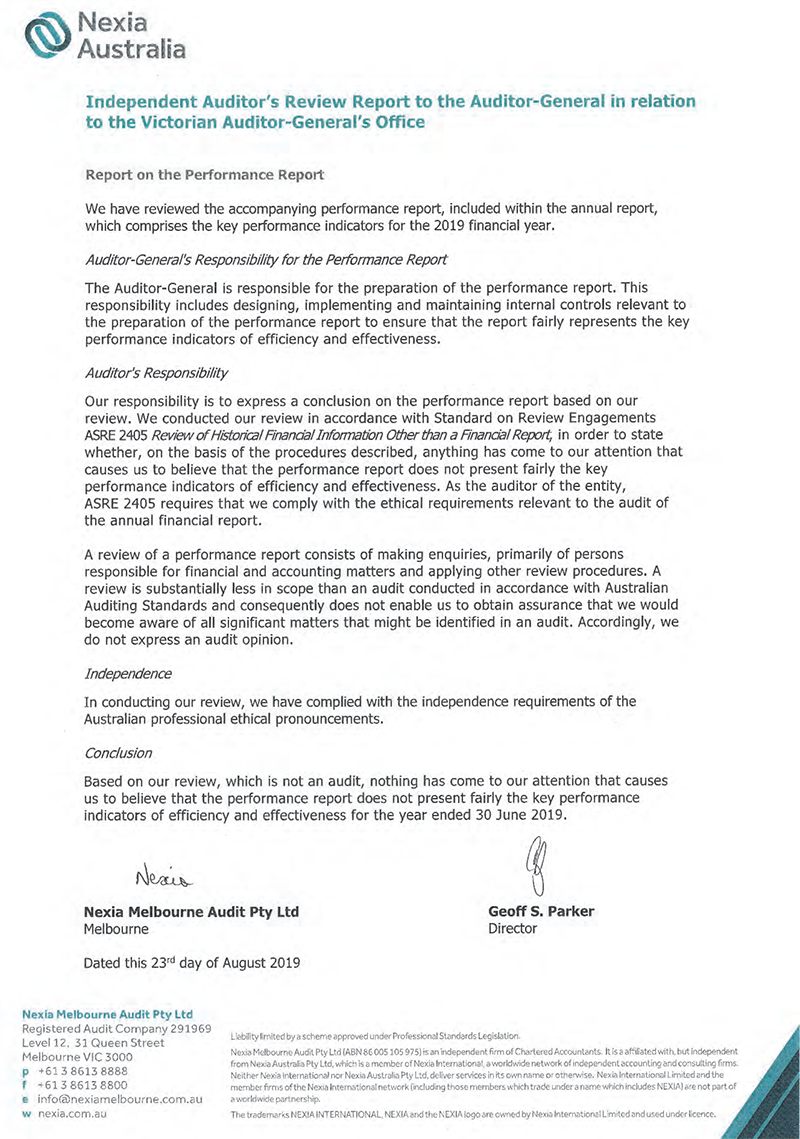