Departments have a duty under the Equal Opportunity Act 2010 to take steps to eliminate sexual harassment in the workplace. This is a positive duty, which means they are legally obligated to take reasonable and proportional steps to provide a working environment that is free from sexual harassment. To do this, departments need to have effective prevention strategies, as shown in Figure 4A.

We assessed whether departments take all reasonable steps to fulfil their duty to eliminate sexual harassment in the workplace. In doing so, we focused on departments' key prevention strategies.

A clear and accessible sexual harassment policy signals to staff that a department will not tolerate harassment in their workplace.

Policies help employees understand what sexual harassment is, and where to get help if they witness or experience it.

A comprehensive policy also minimises a department's risks and legal liability. In the case of Richardson v Oracle Corporation Australia Pty Limited (2013), the Federal Court of Australia found that the respondent organisation was liable partly due to gaps in its sexual harassment policy.

We found that all departments have a policy that mostly aligns with the model policy. Instances where policies were not aligned include:

Policies are only effective if staff are aware of them and know how to access them. We found that all departments had an accessible policy on their intranet.

Figure 4B
How knowledgeable are you in relation to where to find your department's policy on sexual harassment?

Departments should communicate their sexual harassment policies and ensure staff know how to find them. We discuss this further in Section 4.5.

Departments can use training to prevent sexual harassment in their workforces. Training helps staff better understand what unacceptable behaviour is and how to respond in different situations. It may also encourage staff to report complaints. We found one instance where a staff member made a formal complaint because of training they attended.

Factors that influence the adequacy of training include its:

Tailored training may help reach and educate specific groups, such as managers or workgroups with poor culture or high rates of sexual harassment.

According to VEOHRC, sexual harassment training should be a mandatory part of induction for new employees, and departments should provide refresher training regularly.

Figure 4C
Have you undertaken training on sexual harassment? 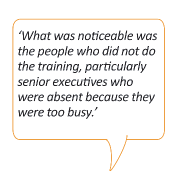 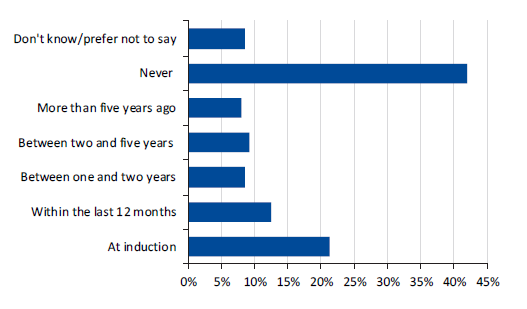 Most training consists of an online module during the induction process. This can be completed at any time, often enables electronic capture of staff who completed the training and when, and ensures that departments meet their core training obligations.

Training must be sufficiently detailed to ensure that staff understand what sexual harassment is and how to respond. Effective training gives employees the skills, knowledge and confidence to apply what they have learnt in the workplace.

Our survey found that of those that attended sexual harassment training, 60 per cent thought it was effective or very effective, as shown in Figure 4D.

We assessed training provided by each department. As outlined in Appendix C, we found that some training packages did not include key elements such as:

We also found that many of the training packages did not discuss 'grey area' behaviours and bystander responsibilities, which we explore further below.

Many of the training packages we reviewed focused on overt examples of sexual harassment. Staff would benefit from training that also discusses more nuanced behaviours that many survey respondents referred to as 'grey area' behaviours.

The most prevalent forms of sexual harassment in departments are intrusive questions or sexually suggestive comments or jokes. These can be 'grey area' behaviours, where some employees may feel offended and others may not.

Through our survey, we heard from many employees who were unsure about whether something they experienced was sexual harassment. 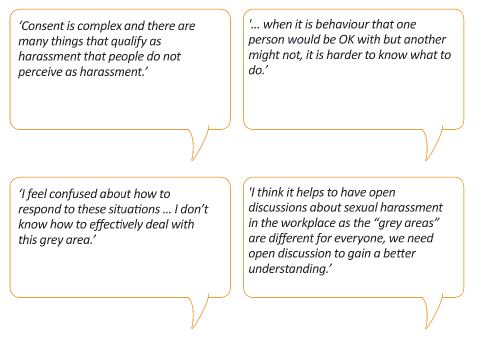 Training that discusses these behaviours is effective, because it:

Support from a bystander can be pivotal in an employee's decision to report the harassment they experience. It can also help a person experiencing sexual harassment feel that they have support from those around them. For this reason, training packages should:

Many of the training packages we reviewed reference the importance of bystanders calling out unacceptable behaviour. However, the packages do not guide potential bystanders on how they could do this.

Managers play a key role in complaint handling and resolution. A person who has experienced sexual harassment often first contacts their manager rather than make a formal complaint.

We found that survey participants felt that managers do not always respond appropriately to complaints and that this can have significant consequences:

According to the 2019 PMS, those who experienced sexual harassment were less confident in approaching their manager to discuss concerns or grievances (55 per cent) than those who have not experienced it (76 per cent).

We found that no departments have specific standalone sexual harassment training for managers. Four of the eight departments (DET, DELWP, DJPR and DoT) have manager training that includes addressing complaints or wellbeing, as illustrated in Figure C3 in Appendix C.

Training managers to identify and respond to inappropriate behaviours may ensure better resolution of complaints and increase general confidence in the complaints process.

Regular communication from senior leadership reiterating a commitment to preventing sexual harassment in the workplace sends a powerful message. This can help build a culture that does not tolerate harassment and works as a preventative measure.

As well as communicating a commitment to the elimination of sexual harassment, departments should remind staff about their sexual harassment policy and complaint channels. VEOHRC recommends that this happen at least once a year.

Seven of the eight departments have sent out communications from the Secretary at least once since 1 January 2018. DoT has not yet sent out any correspondence as it has undergone significant change since it was formed in January 2019.

Our survey shows that most respondents have received communications from their department about its commitment to preventing sexual harassment, as illustrated in Figure 4E.

VEOHRC also suggests that departments consider reminders at key times, such as before work functions. We found examples of departments reminding employees of the sexual harassment policy before events such as the work Christmas party. We consider this to be better practice.

Risk factors are any elements that make an employee, or a team, more likely to experience sexual harassment. Risk factors highlighted by researchers include:

Addressing culture requires a whole-of-organisation approach and commitment. The PMS is only one source of information departments can use. DELWP, DJCS and DHHS have all undertaken their own surveys, giving them further data to address cultural issues.

DELWP and DPC include sexual harassment in their broader corporate strategies. The other departments (DET, DHHS, DJCS, DTF, DJPR and DoT) more generally mention ensuring positive culture and wellbeing or addressing inappropriate behaviours in their strategies. This misses an opportunity to more explicitly call out and focus on this issue.

Research has shown that rigid gender stereotypes and gender inequality can increase the risk of sexual harassment.

The Victorian government and the not-for-profit sector have initiatives to create a safer and more respectful workplace for all genders. While it is difficult to determine whether these initiatives have a direct impact on sexual harassment, it does reflect strong leadership around establishing gender equality.

The Victorian government's Safe and Strong: A Victorian Gender Equality Strategy (2016) promotes and ensures gender equality. The strategy aims to introduce gender auditing across the Victorian public service. The Office for Women (at the time with DHHS, but now with DPC) commissioned a gender audit pilot in 2017, which all departments took part in. The results showed inequality in pay and leadership.

Four departments have included targets in their strategies for executive officer or senior leadership positions to address gender inequality.

The PMS is the best source of information for departments to understand risk factors for sexual harassment. It is important that departments use the results to listen to what their employees are telling them and take decisive action.

DoT did not undertake the PMS in 2019 and so is unable to utilise this data to understand its organisational culture. 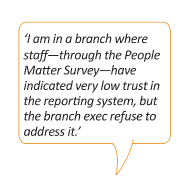 After receiving the PMS results, departments prepare action plans setting out how they will address key risk areas. Departments can decide which areas they address.

DET and DHHS had action plans to address inappropriate behaviour more broadly, such as bullying, harassment and discrimination. While these do not specifically address sexual harassment, often the initiatives to address such behaviours overlap.

All of these plans aim to address PMS findings at a high level and include department-wide training and communication initiatives. However, these plans do not focus on individuals at higher risk of sexual harassment, such as those with a self-described gender identity, LGBTIQ employees, women and Aboriginal and Torres Strait Islander employees, as outlined in Part 2.

The Victorian LGBTIQ Taskforce was established in 2015 and can advise government departments on ways to support their LGBTIQ employees. Both DHHS and DJCS have working groups that provide subject matter advice and support to this taskforce. 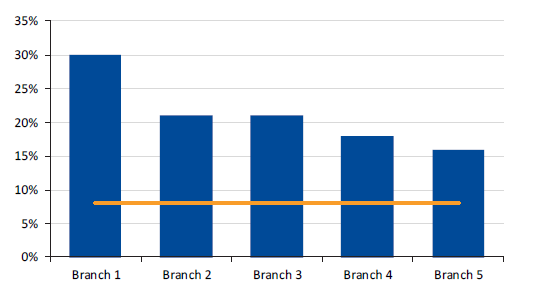 Source: VPSC report to one department 2019.

Departments can harness this data and look at prevention of sexual harassment holistically. This may ensure not only that they comply with their legal obligations, but that staff are safe from harm.