DHHS service agreement staff need to strike a balance between managing funded organisations' performance in accordance with contractual requirements and partnering with them so that they are best placed to provide quality services to clients. The varied and often competing priorities of service agreement staff reinforce the need for DHHS to clearly define their roles, including key skills and capabilities. DHHS also needs to provide all staff with sufficient opportunities to acquire and develop key skills and capabilities over time.

In this part, we assess:

While retaining its relationship management approach, DHHS is increasing the focus of its service agreement staff on performance management of funded organisations. This follows a series of reviews that highlighted gaps in how DHHS monitors and manages service agreement performance. This increased focus is consistent with better practice principles for contract management, but varying sector capability and depth will pose challenges to its implementation.

Combined with the wide geographic spread of service agreement staff, these issues have contributed to a lack of staff awareness of their roles and of the extent of their responsibilities.

DHHS restructured its service agreement management function at the central office, divisional and area level across the first half of 2018.

As part of the restructure process, in 2017 DHHS commissioned a review of the current system of service agreement management (the restructure review). It found there was conflict in DHHS's roles of funder, provider, contract manager and regulator, and confusion about the multiple functions of LEO and program adviser roles. The report proposed splitting the regulatory and contract management functions. DHHS implemented this in multiple stages:

Another key change implemented in June 2018 was to combine the roles of LEOs and program advisers into a single service agreement adviser role that extends across the health and human services portfolios. These roles sit within the new Agency Performance and System Support Units in each of DHHS's 17 areas. DHHS expects that this new role will have an increased focus on performance management of funded organisations while keeping a relationship management focus. We examined the required skills and capabilities of previous LEO and program adviser roles, along with the recently announced service agreement adviser roles.

Figure 3A details the key skills and capabilities of contract managers, based on the ANAO's better practice guide and the VGPB's VPS Procurement Capability Framework.

Figure 3A
Key skills and capabilities of contract managers

Source: VAGO based on the ANAO's better practice guide and the VGPB's VPS Procurement Capability Framework.

The restructure review commissioned by DHHS to support the proposed restructure of its service agreement management function identified the need for contract managers to have similar skills and capabilities.

We examined the previous position descriptions for LEOs and program advisers to see whether they addressed the above skills and capabilities. We found that the position descriptions for these roles did not explicitly focus on the performance management and commercial/financial skills identified in the ANAO's better practice guide and VGPB's VPS Procurement Capability Framework. However, other central and divisional DHHS staff are responsible for monitoring the financial performance of funded organisations under both the previous and current organisational structure. The LEO and program adviser position descriptions more clearly reflected the remaining five skills identified in Figure 3A, although they were not identical.

It is evident from the new positions descriptions—as well as the proposed functions of the newly created regulatory and performance units—that DHHS is more explicitly focusing on managing the performance of funded organisations against contractual obligations.

Our discussions with LEOs, program advisers and funded organisations highlighted concerns with the increased focus on performance management:

The next section examines the range of training programs available to service agreement advisers in further detail.

Successfully adopting a more performance management-focused approach will require DHHS to actively manage these concerns. In particular, it is important that DHHS:

Overall, we found that:

In terms of orientation and induction, DHHS centrally provides an 'Introduction to managing service agreements' training program for new service agreement advisers and other relevant staff that:

The introductory program includes high-level content on good practice contract management and governance principles that is confined to a series of brief PowerPoint slides. This content alone is insufficient to provide service agreement advisers with the contract management and governance skills needed to effectively manage service agreements and the performance of funded organisations.

Figure 3B details all of DHHS's centralised training programs that relate to managing service agreements. We found that these programs focus on how to use relevant DHHS systems and follow established processes.

Note: Excludes any local training programs that are designed and delivered at a divisional or area level.
Source: VAGO based on DHHS's 2018 training calendar.

DHHS does not have a central attendance register for all training programs that would show how many staff have completed courses or induction.

SAMS2 training is compulsory for staff who manage service agreements. Records for SAMS2 General and SAMS2 Overview training in 2017 show that 143 DHHS staff attended these courses. Half of the participants were based in DHHS's central office, and half were based in the divisions. These courses are open to anyone who uses the SAMS2 system.

The internal report of the restructure review for assessing the organisational redesign of the service agreement management function identified an increased need for training.

Through our online surveys and face-to-face interviews, we sought the views of DHHS service agreement staff on whether:

We summarise all DHHS staff survey responses in Appendix D.

Overall the survey results highlight that a significant proportion of staff are dissatisfied with DHHS's learning and development framework for managing service agreements.

Staff views on orientation and induction

Figure 3C
Survey responses—DHHS staff
Question 8: How effective has the orientation and induction provided by DHHS been at giving you the basic skills and knowledge needed to manage service agreements? 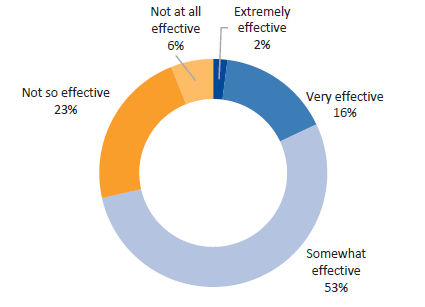 We also asked the DHHS staff surveyed to suggest how DHHS could improve its orientation and induction for new staff. Respondents' open-text responses commonly highlighted the need for:

Our discussions with central and regional DHHS staff highlighted concerns with staff orientation and induction for managing service agreements. Specifically, various LEOs and program advisers advised that they never received a formal orientation or induction for their role and had to rely on the experience and knowledge of nearby colleagues instead.

Figure 3D summarises DHHS staff responses to our question about the effectiveness of training in building and maintaining their service agreement management skills. It shows that 32 per cent of respondents viewed training as either 'not so effective' or 'not at all effective'.

Figure 3D
Survey responses—DHHS staff
Question 9: How effective has training provided by DHHS been at building and maintaining the skills you need to manage service agreements? 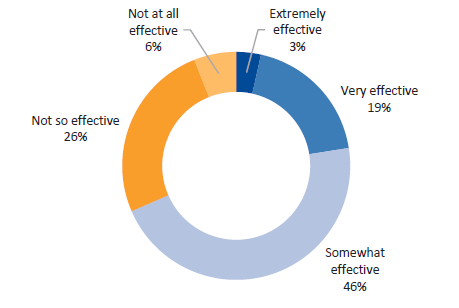 We also found differences in survey responses across DHHS divisions:

We asked the DHHS staff surveyed to suggest how DHHS could improve its training of service agreement staff. Respondents' open-text responses commonly highlighted the need for:

Figure 3E summarises DHHS staff responses to our question about whether they have an individual performance plan. Only 76 per cent of respondents reported that they have one.

Figure 3E
Survey responses—DHHS staff
Question 11: As a service agreement monitoring staff member, do you (or did you) have an individual performance plan? 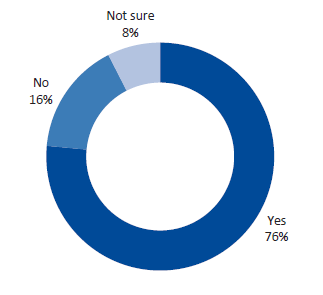 Based on the survey results, we found that the use of individual performance plans was particularly low for human services-focused staff and North Division staff:

We asked DHHS staff survey respondents who reported having a performance plan about how often their performance was reviewed against it with their manager. We summarise the responses to this question in Figure 3F. It shows that staff most commonly review their performance against their plan twice per year (58 per cent), in accordance with DHHS's Performance and Development Process Policy. This trend was consistent across DHHS divisions and between health and human services-focused staff.

Figure 3F
Survey responses—DHHS staff
Question 12: How often do you (or did you) review performance against your individual performance plan with your manager? 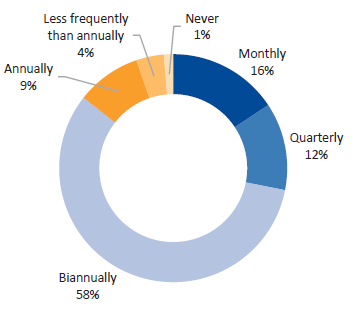 We also asked DHHS staff about how effective the individual performance planning and review process had been at addressing their learning and development needs. Figure 3G shows that 48 per cent of staff viewed the process as 'somewhat effective', while 32 per cent viewed it as either 'not so effective' or 'not at all effective'.

Figure 3G
Survey responses—DHHS staff
Question 13: How effective has the individual performance planning and review process been at addressing your learning and development needs? 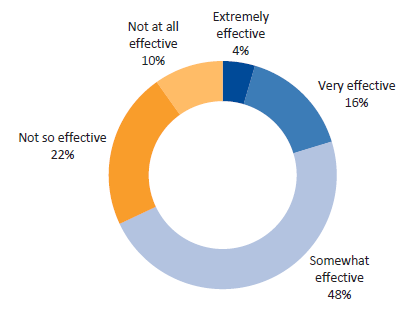 We found some variation in staff views on the individual performance planning process between the health and human services portfolios, as well as between DHHS divisions:

Our survey of DHHS staff also sought their views on their capacity to manage services agreements. This included questions on:

In particular, the survey results show that a high proportion of staff believe much of their work is focused on tasks that are outside their position description. This is consistent with the restructure review commissioned by DHHS. It found that staff time and effort spent on service agreement activities had been compromised by 'a lack of clarity in the interface between contract management, relationship management or sector capability building, and the appropriate time for LEOs and PASAs to spend on each of these functions'. The restructure review also found that, in the absence of role clarity, service agreement staff had 'taken on responsibility for managing pressing client needs, rather than managing compliance of service providers, nor addressing systemic issues and gaps'.

It is important that service agreement staff focus their effort on the core functions of their role. Having staff regularly perform tasks that are outside their role—such as addressing client needs—limits the capacity to monitor and address funded organisation performance issues.

Figure 3H summarises survey responses to our question on the proportion of staff tasks performed that are outside their position description. It shows that:

Figure 3H
Survey responses—DHHS staff
Question 14: As a service agreement monitoring staff member, what proportion of tasks that you perform are NOT reflected in your position description? 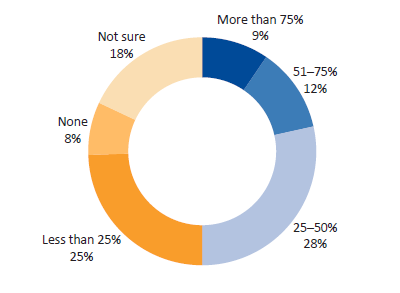 Figure 3I summarises survey responses to our question on how much time DHHS staff spend per day on monitoring and managing funded organisation performance. It shows staff spending variable amounts of time on these tasks, with 21 per cent of respondents estimating that they spend three to four hours per day on monitoring and managing organisations' performance.

Figure 3I
Survey responses—DHHS staff
Question 15: On average, how much time per day do you spend monitoring or managing the performance of funded organisations? 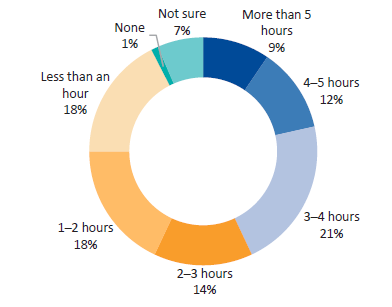 There was some variation in the responses to this question between DHHS divisional and central office staff:

Time spent on other tasks

Figure 3J summarises survey responses to our question on how much time DHHS staff spend per day on other tasks beyond monitoring and managing funded organisation performance. Like Figure 3I, it shows staff report spending variable amounts of time on these other tasks.

Figure 3J
Survey responses—DHHS staff
Question 16: On average, how much time per day do you spend on other tasks (i.e. beyond monitoring or managing the performance of funded organisations)? 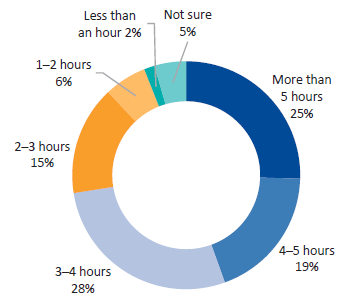 These results did not vary significantly when broken down by DHHS portfolio or division. However, the results did vary between DHHS central office and divisional staff. Specifically, 56 per cent of central office staff estimated that they spend five hours or more per day on other tasks, while between 15 and 25 per cent of divisional staff spend five hours or more per day on the same tasks. This reflects the fact that central office staff will often manage service agreements as a secondary part of their role.

Agencies need to retain the knowledge of key employees in the event that they are unavailable or leave their role.

One of these two staff members recently moved into another role within DHHS but is still regularly called upon to assist with SAMS2-related issues and queries. DHHS currently has no formal measures to capture the knowledge of these two staff.